The Gallery Rocket in Harajuku was closed on February 29th, 2000. This gallery was started from Yasushi Fujimoto’s hope that he wanted a place where he could see more artworks by young creators. He is the president and art director of the design firm ‘Cap’ which works on editorial designs for Japanese major fashion and culture magazines. The opening of the gallery was done by Intentionallies, and many influential creators regardless of genres, Groovisions, TGB Design, Ichiro Tanida, Koji Nomura, Hibiki Tokiwa, Edo Tsuwaki, etc. followed. Different exhibitions by different creators were held every week and it became a kind of special place. 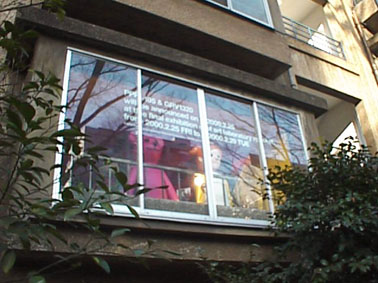 Creators make their original goods (artworks) on a massive scale for customers to buy them easily like Groovisions. (This strengthens the relationship between creator and customers.) With such new creative style by creators, the gallery broke a tacit understanding in other galleries that visitors only come to see the artworks, and told us as a matter of course that we can easily buy the creators’ artworks. 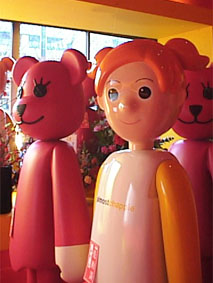 It was really impressive for me that the last exhibition of Rocket was the collaboration work by ‘Momo’ and ‘Chappie’, the most important characters born from a creative scene in Tokyo. The gallery is now getting ready to be a shop style space. 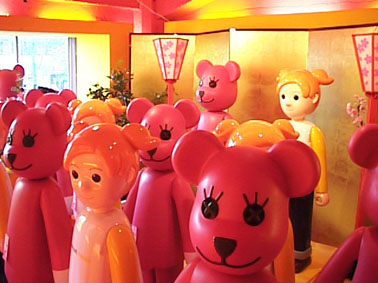 Chappie and Momo at the height of their popularity. Of course they were for sale and almost of them were labeled `Sold.’ It must be good to display it in your room. Maybe shop owners want to display them in the shopwindows? Other samples of mousepad, T-shirt and seasoned powder (now developing!) were exhibited as well.

I don’t have any realities on the scene before 90’s, but now I would say the appearance of creators who are well aware of the balance between goods and money which connect customers and creators must have been a new stream happened in the latter half of 90’s creators scene in Tokyo. I personally like ‘art = happy’ better than ‘art = authoritative’.