An experiment to make the skateboard just like the one in the movie ‘Back to the Future 2’.

For two days on September 4th and 5th, an experiment to work the AirBoard by Kazuhiko Hachiya was carried out at Gallery Art Souko near the Simotakaido station. This AirBoard is an art project to actually make an AirBoard which floats by antigravity and using a jet engine just like the one in the movie ‘Back to the Future 2’.

Until now this project presented an alpha version that floats the AirBoard by using a firing mechanism to jet engine. This beta version is an experiment to take a person on the floating board. In fact, as the experiment can only be carried out for a few minutes, there were full programs consisting of a talk show, mini live and the experiment.

Unfortunately, it was raining a little on the first day and it was not a good day to go out. The event started with the talk show by Kyoichi Tsuzuki, Yoshiki Sakura and Kazuhiko Hachiya, and the mini live by Gorgeous followed after that. Then it led to the experiment. 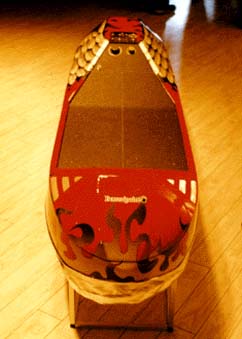 This is the AirBoard. It was painted by Bonzaipaint. There seems to be a collaboration that Bonzaipaint will paint the artwork that Tetsuya Nakamura produced from an image of the fastest form.

There were two engines in alpha version, but it was improved to a single engine in the beta version and has a heat resistant skirte.

Hachiya constantly said, ‘this is an experiment to work the AirBoard and it’s dangerous’, I think if there’s someone who doesn’t think it’s dangerous, he must be crazy. It is no wonder that the board might explode, but they were trying to float using a jet engine and a man skating on the board. When thinking of that my head felt strange.

In a tense atmosphere, it was fired up by letting air in with a machine just like a vacuum cleaner. After a few failures, the jet engine started to make a terrible noise. It just let me take a half step backward. Then buoyancy started to concentrate on the silver colored skirt of the board and the heated airboard was actually floating on the stage (a little less than 10 centimeters high)!