While most writers tend get married and settle down (eventually…), Spice (female) and Unique (male), both writing since the mid – 80’s, continue writing graffiti together, as a part of the International IBS Crew, and are recognised throughout the world for their contribution to the artform. 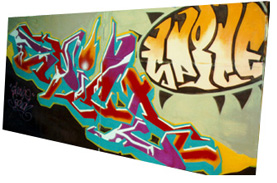 What got you into graff originally?

Unique: Beat St… the movie: the way it displayed graffiti was huge and passionate.

Spice: I first was a b-girl… who breaked in a crew called Kosmic Krew, during the breaking craze, film clips such as Malcom McClaren’s “Buffalo Girls” and Rock Steady’s “Hey You” and various movies were starting to flood our TV screens… this is when I first took notice of graff. My brother and I then started bombing with our breaking alias… shortly after, we were hooked, which lead me to where I am today…

What do you say characterises your work – and what is are the most important aspects of a good piece?

Spice: I’d say its my fill ins that characterise my work… I like to add movement in my pieces and I usually paint things that are of interest to me… suns and symbols of ancient civilisations are usually hidden amongst my work. To me, a good piece will consist of a funky well balanced outline… colours and neatness count but if the outline aint good then the piece sucks. 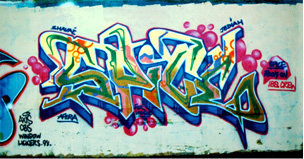 Unique: Definitely my angles, old school influences from New York and traditional cuts and arrows. I also would say that my fills stand out. Good piece = good outline with the use of action characters.

Obviously your styles are always evolving, how much influence do you draw from each other?

Spice: As I got more seriously involved in concentrating on pieces, I’d be lying if I didn’t say I was somehow inspired by Unique’s style. It’s not like we ever worked on outlines together though, and we very rarely paint together…I have my own style as much as he has his own and it definitely shows in our fills.

Unique: If she starts to show me up… then I better get myself in check. 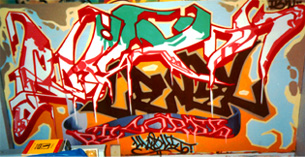 Do you find Gender and Nationality influence how you relate to the graff scene?

Spice: Graffiti and Hip Hop has always been a male dominated culture… being a female in this scene can either work for you or against you… I’d much prefer it if people looked at my pieces never knowing a female did it. That way my work can only be judged on skill alone…

Unique: Of course its male dominant because its a dirty sport and yes I find nationality plays a big role in graff for eg:rap music is black dominant in the US and as far as graff goes, its completely multicultural… In Australia and Europe it seems to be the white kids who are more active. If graffiti is an element of the Hip hop culture then it proves that Hip hop as a whole is multicultural.