I am working with this bald guy at the moment; a rather salubrious and slightly twisted character. His name is Toke and he’s one of the two people behind KALIBER10000 (the other is mschmidt.)

I’ll be interviewing him in a moment, after he’s finished scanning in his head. 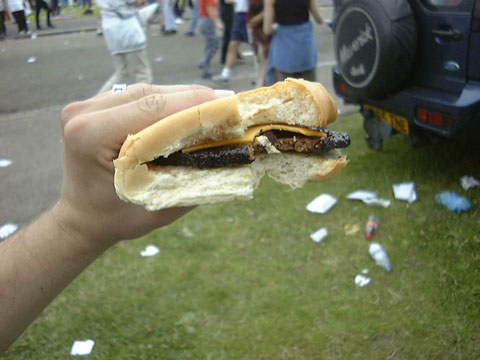 What would you say are the ambitions of KALIBER as a project?

To get maximum exposure for ourselves and to have a forum where you can put out your own projects, kind of like a small band making their own record label to distribute their own music. However I haven’t actually made anything for KALIBER yet.

We wanted a space to do our own thing. The point is that people will come in and check out the latest fancy tricks.

We just wanted to make it more regularly updated, something that was alive, with new things happening all the time, building a community by bringing people back every week. We wanted to build the ultimate inspiration resource.

The whole point of the site is keep this underground thing. That’s why we’ve avoided sponsors and turning the site into a money making thing.

Why is that important?

When you start to get involved in money you have obligations that we don’t feel comfortable with. The whole idea of getting it paid for would make us lose the focus. If we got a big sponsor then we would be able to get away with a lot of the things we do when there aren’t.

Does it work in the way you wanted it to?

Yes, very much. Apart from the fact that people think that there is a specific style and way in which you must work when submitting to the site. This isn’t really the point, but it happens anyway.

Do you think this is a response to the strong style of the site?

Yes that might be one of the problems. I think we’re going to redesign it. It’s a bit dark and gloomy right now We want to clean it up and make it more friendly and sort out the navigation; ideally to make it more magazine like.

Will there be any changes in any other respects than the design, structure and navigation?

We’ve been running some of these special features like the desktop gallery and the sublime gallery porn logo competition and we’re soon going to put up “Little Computer People Cam,” a commodore game from the mid eighties. It’s like Tamagochi but was obviously out there a long time before. It features this little guy who lives in a house. You can ask him to do things like play records and stuff and feed the dog. Following the principles of the Tamagotchi idea, this little world is dependent on you; if the guy doesn’t eat (because you don’t tell him to) he goes green and dies. There were rumours in the 80’s that after you went to sleep his friends would come round for a rave party. Joshua from Praystation is helping us build an engine to serve live video from the game so the people can check up on his activities all day, every day.

Another thing we are going to change in the redesign is to make weekly stereophonic issues. Same idea as the way we do the graphical issues but getting musicians to collaborate.

When we reach issue 100 (I think we’re 34 ), we would like to go out and visit some of the people who have done some of the issues and take some camera equipment out and document it somehow. We’d make some special edition, a book a CD, a CD book, just something to celebrate the hundredth issue.