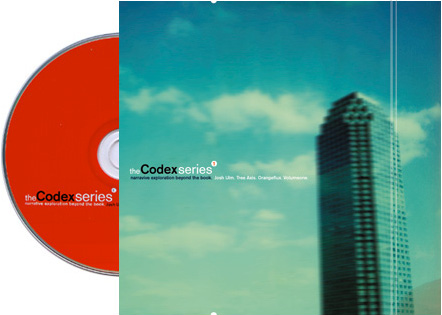 The Codexseries is an ongoing CD-ROM project that consists of 4 projects by 4 different talents in the digitial medium who are are dealing with the issue of narrative and storytelling in new and interesting ways.

Somewhere between a compilation CD and a digital fanzine, The Codex Series is a narrative laboratory, something to share and talk about. Each project is an expression of an individual or a group that have concepts and ideas they want to express through digital media. The Codex Series provides a space for these ideas to come to fuition and, as an artifact, the series functions as a reflection of what is going on around us creatively and technologically.

The Codex Series consists of four issues each year with 4 projects per issue. Project “flashcards” are included with each issue that explain each project intention. Issue Number One features the work of Josh Ulm, Tree Axis, Orangeflux and Volumeone.

Josh Ulm s project entitled “persistENCE OF VISion” is a study of human communication, observation and response patterns. This study aims to examine the correlations between the speed at which information is observed and the behaviors of dynamic responsive media to find the effects of this interactivity on our perception and recognition of that information. Understanding the behaviors possible by the media and the responses those behaviors elicit, is the first step. exploring ways in which those responses can be reintroduced into the mediaﾕs behavior to create a unique and unanticipated collaborative between the audience and the artist is the total gain, and will ultimately lead to future explorations.

Stella Lai and Krister Olsson of Tree-Axis developed the project “Fantasy Island”, a quick game which appeals to both children and adults. The player is charged with finding eight animals on an island, and for each animal locating a specific object necessary for its happiness. To get to each othe objects, the player must megotiate eight different mazes. all eight objects must be found within the time limit to ensure the happines of the animals.

Matt and Mark Owens of Volumeone created “Heterotopia”. Unlike utopias, heterotopias are real, locatable sites that serve to mirror, in a particularly condensed form, all of the other spaces within a given culture. The project uses photographs of TWA Terminal 5 at John F. Kennedy Airport in New York, a building often thought of as a “modernist” space, as the foundation for an examination of a contemporary heterotopia as a kind of postmodern paradise. Within the project, images of the terminal are juxtaposed with explanatory text that begins to suggest the various ways in which Terminal 5 can be thought of as a heterotopia – as a space of constant arrival and departure, purification rituals, the dissolution of geographic boundaries, the condensation of time, and the deployment of surveillance technologies.