In the 80’s Nick Philip worked as a fashion designer and ran a fashion brand anarchic adjustment that shocked both the exisiting fashion and CG industry. After receiving the Best Digital Contents Award at San Francisco Multimedia Summit for his CD-Rom Radical Beauty, he came over to tokyo last month to exhibit his latest video installation work Post Human at NTT Intercommunication Center.
Mariko who had lived in San Francisco (living in Tokyo now) and contributed Info-World SF before interviewed with him.

I first want to ask you about the exhibition at ICC.

It was an selection of all different works I’ve done. It was called “Nick Philip’s Selected Works“. We displayed a lot of design works I’ve done in the past and showed Anarchic Adjustment street wear line I did. Anarchic is one of the consciousness street wear lines in California. So we showed a lot of those designs, particularly forcusing on designes I had concepturized concept. And we showed some of Wired magazines – Wired UK and Wired America – and a lot of different record labels and different Ambient musicians. And then we had Radical Beauty there with a couple of Power Books you can use Radical Beauty and also had video of some of the animations from Radical Beauty showing 3 screens making like a cube with 2 projections from the 2 sizes and 1 projections from the front. You can sit down in there. It was like completely all around you.

Then we had an internet installation called “nowhere.com” which is a collaboration piece I did with a programmer named Nic Harteau, assisted by Jeff Taylor.
That was the domain nowhere.com, which is used by spamers who use the internet to circulate the junk mail to trying sell stuff to people in the internet. Hundreds of spamers use nowhere.com to disguize the domain.
Thousands of emails everyday going through nowhere.com. The most of it spam and then they replys to spamer.. angry people replying back saying “don’t fuking spam me!!”
Nowhere is often not in the email browsers and the reply form. Nowhere.com is just the default. If you don’t put any email address in, you will be like someone@nowhere.com or noone@nowhere.com.

So what we did was we had a computer that we got from day to night internet and we bounce to mails to this computer. We distributed the mail to 12 fax moters and then connected those to 12 fax machines. So we had wall longs about 35 feet with faxes, just printing out all these mails. And we had trash cans on the bottom collecting all the mail.
So they outflow just so. We used more than 50 thousand feet of fax paper. Today they took it out and I was like “Oh I need to take it on video…”
It’s real time recieving, moving really quickly. Just going going throughout the show. They just throwed out more and more by the time the end of the show yeasterday. That was something we did specially for this show.
Then I did also a couple of other installations. “Lightbox” installation.
It was an installation based on the idea of post humanism and the idea that technology and biology are crossing out, how we solve redefining our evolution with technolory. It was like a life sized poster.

As you mentioned that you are focusing on post human idea, can you explain more about the idea behind your work?

We got this idea called “The End of Man” which is our idea for projects based on the post human concept. “Post Humanism” is the idea that we are entering a period of technologically aided human evolution. Through the development of new technologies – artificial intelligence like Deep Blue, nanotechnology, cloning, genetics/geonome, implants, aurgmentation – we’ll be able to ask and conceivably answer some of the most fundamental questions of human existence. As technology evolves into a networked self-regulating intelligence, it becomes increasingly more like us, forcing us to question our sense of ourselves and ultimately redefine what it means to be human.
The end of man on the surface seems apocalyptic, but this is analogous to the shamnas journey of death and rebirth, the end of man as we know it and the begining of something beyond.

How do you integrate the post human idea into your work?

I made a lightbox assembledge which is going to be the begining of a new seris of works based on these concepts. Life sized assmbledges of processed body imagery that is inspired by the feeling of Post Humnaism the first one “ontological vertigo” addresses terror we will feel as the transition comes.
There’s a quote at the top of the piece which reads: “(Man) that figure drawn in sand at the ocean’s edge, soon to be erased by the incoming tide” (Foucault 1966: 387).
Other compositions into shcematic diagrams of Man machine interface, implants, prosthetics.

How was workshops which you’ve also done for this exhibition?

That was good. I basically sat down and gone through my work and explained all the concept and everything all together. It was interesting going through and see the threads…
Last weekend I did lecture with slide, showed the work, talked about the ideas behind it and what was going on at the time I made the work. This weekend (on saturday) we had djs come…frends of mine, Japanese djs kind of played. And yesterday Jeff did lecture about photoshop and how we made some of the images …more like technical stuff.

Have you done this kind of show before?

Not really. I’ve talked in some of panels before. This thing is called Res Film Restival. And they had panel about film making. And Segraph, big show of computer graphics…they have local chapters of that. They have a meeting every month and people show their works and I showed my works like Radical Beauty about 6 month ago.
So I’ve done few, but this was the biggest thing I’ve done so far.

I met a lots of cool people like video artists, musicians..I really enjoyed it.
It’s interesting it’s like the vive here in japan seems really positive. I think a lot more positive actually than in San Francisco. I mean people are all positive in San Francisco, but it seems like poeple are into darker side of tecnology and music and stuff like that. But in here a lot more everyone seems positive. It’s interesting because my earlier work is really positive and more recently I try to mediate my positivity with real..sort of reflection of what’s going on. It’s important to be positive, but you don’t want to be so positive that you are an escapist. so in the early 90’s I was really positive.
May be it was too much. So I kind of got more grounded recently.

Technology is just like anything else. There’s good or bad that they can bring. I focused little bit on that in some of my works. “Nowhere.com” piece is like that. It just makes tangible how much there is in the internet and how much they are just useless. Some of the stuff in Radical Beauty as well. Graphics are little bit darker and edgey …So it’s interesting it’s almost like coming here and hanging around with ambient people and it seemed like they really love my old works. And new stuff…. they liked it but you can sort of tell it’s little bit difficult for them to deal with. May be a lot of people knew my ambient work like ‘it’s so spiritual and positive…’ and I was always gonna doing that.
It’s almost like coming here going San Francisco 3-4 years ago in a way. I just felt that kind of positivity. I think San Francisco is because of a lot of culture, a lot of optimism and hype about internet,,,and now it’s like 5-6 years after that. It really is mainly the financial engine.
I think people in San Francisco look it like it’s not outside world. So it’s little bit different.
It seems Japanese people in general are all positive which I think is great. 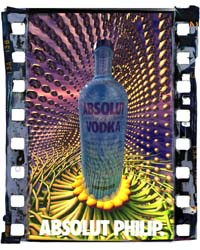 A lot of media like magazines recognize you as a big one in the rave scene.
What do you think about your influence to the rave movement?

Rave culture, new age, technology culture. It’s massive. Thousands of people involve that movement and I’m just one guy. I think I had an opportunity in my work to be able to be involved in the culture and to look at the culture, trying in like sameway to represent visually and conceptually. So I had the opportunity to do that in different mediums.
I’ve always made it, tried very hard to trying stay true to what I thought ideas of the time and what was important. So I think that’s propably why I’ve been noticed. I’ve always tried to being on my content and the content is always being focused on the ideas of whatever I thought was most cutting edge and interesting at that time which one time is rave culture.

Anarchic T-shirts have been the must-have item not only in the rave scene but also in the club scence. Do you recently do t-shirts design at all?

I haven’t done any t-shirts for a little while. The last t-shirts I did were the design I did for Wired. It is called “SHIFT”. It had all Mac icons on it with using sort of desktop metaphor, ideas about technology and society. That was last thing I did.
But I’ve got some ideas now for some new shirts and content that we are gonna do, based on post-human ideas. So we actually talked to some people here in Tokyo. Maybe doing something.
When we are back in america we gonna work on that.
It’s weird. I really think that t-shirts are really good medium to get messages across about whatever is happening. so I don’t like to do them just because I can do them. I easily wipe for ideas, set ideas coming to my head and then i will do it. I will be thinking for a while and i’m starting to get enough ideas now where I kind of visualize it into..like little t-shirts lines or some. Maybe next year I might do it.

You do Dj constantly and actually djed in Tokyo. Like t-shirts design, music and computer graphics, you work with a lot of medium.

Yes. I worked on a lot of different medium. I’ve done t-shirts, print, skate board design, clothing. I even worked on movies, multimedia, video…
To me ideas trancsend media. If you got a good idea, you can express it through a lot different thing. For me all these different media are just different vehicles for ideas. That’s what they are.
If you can hook up with specialist in those areas and learn from them, work with them, and collaborate with them, then you can find a way to express your ideas through those medium. Most people stay specialized in one area.
So there’s always out there and so you can learn a lot from. I’ve been lucky I got a chance to work with a lot people who are specialized in that field. I’ve been able to tight in my ideas and express them in different medias.
To me ideas are the most important.

What’s your plan for next projects?

The End of Man is a kind of the main theme for next projects. We gonna do some music, interactive animations, maybe DVD, and gallery installations as well. We just gonna do work inspired by that idea.