Suppose going to see “Titanic”, how much background information on the movie do you need to know? The movie director is James Cameron and it’s starring Leonaldo Di Caprio and Kate Winslet. I would say that’s about it. Casted by who? Who the art director or the producer? It really doesn’t matter for the public or, not to mention, for the couples to know all that. Yet there must be more or less nosy and critical movie freaks dying to see Titanic. “PERFECT BLUE” is a such movie attracted to both public audience and hardcore fans. 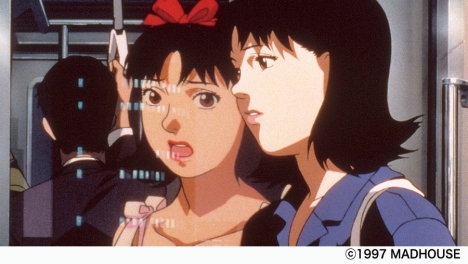 From last year’s “Eva Phenomenon” thereafter, many of the animation freaks started, through the inernet, to exchange their opinions one to the other. And they will sure continue such communication now on “PERFECT BLUE”, precedingly shown at Tokyo Fantastic Film Festival.

While those who already went to see the movie are arguing about the story, there must have been produced more or less misunderstandings on the film among the internet users, questioning “Is it really an animation for Otaku?”

I was, too, the one had kept asking that question. It was a matter of course PERFECT BLUE would be a damn good animation because there were big names like Katsuhiro Otomo – big one not only in Japan but over the world, and Hisashi Eguchi who created the base charactors for the anmation. What this was about that many of us intended to see the animation in a proper (Otaku) way.

Sure enough, the inside of the theater was recognizably full of Otaku, but among them there I saw those SHIBUYA-mode-clad women. (What I mean by that is supposedly Otake dresses out of fashion as opposed to these women in popular fashion). I know these women are not a type of hip-fashion-clad-Otaku. Why did they come to see PERFECT BLUE? If the movie is Titanic, I will be surely convinced that they came to see Leonaldo Di Caprio. But PERFECT BLUE?? No flesh and blood of course. Nor was any cute guy charactors in it. The main charactor of the movie is Mima, once a pop idol diva and now an actress in the making. She is as cute and pretty girl charactor as is always seen in Hisashi Eguchi‘s charactor creation.

Containing some splatter scenes and the rape scenes in a so-called play within the play, PERFECT BLUE is R-rated. I recieved splatter scenes portrayed in the animation as novel aspect of all, since many of films containing these scenes were merely shown in theaters besides OVA (Original Video Animeation). What terrifies us more about this psyco/suspence movie was the uncertainness that the viewer would repeatedly come across ” whether this scene is real or just Mima’s dream?” Complexedly stacking the real and the unreal in a careful manner, the viewer wouldn’t perfectly know, until the end, which was either real or Mima’s dream. Again it’s a complex thrillling labyrinth the viewer would puzzle around.

“The evolution of animation is not only owed to its technical development but also getting back to its origin, entertainment.” saying is Katsuhiro Otomo. This message, I guess, speaks about the truth or what else can you say. PERFECT BLUE is not exclusive only to Otaku but all. Better to check it out if it’s true or not.

Special thanks to Satoshi Kon, the director of PERFECT BLUE, from whom I received many instructive supports for this article. Here I introduce his homepage which explores more about the movie including the production notes, the report on previews at the film festivals in Korea and Germany, Otomo and Eguchi’s roles in the movie and etc. In addition to these information you might find out the meaning of the title PERFECT BLUE.