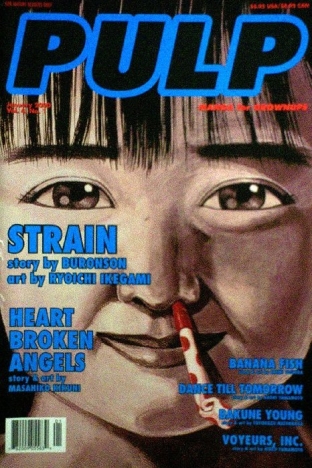 Have you read comics recently? If you think that comics are just for kids, check out the new monthly manga magazine PULP.

Presented by Viz Communications in San Francisco, the first issue of PULP will feature 5 Japanese comics whose titles include; “Strain” by Buronson and Ryoichi Ikegami, “Dance Till Tomorrow” by Naoki Yamamoto, “Black and White” by Taiyo Matsumoto, “Banana Fish” by Akimi Yoshida, and “HeartBroken Angels” by Masahiko Kikuni. Each comics varies in its genre; violence, humor, sex, surrealism, or the combination of all. Many of them must be totally new styles to all unless you are MANGA freaks.

Besides comics, PULP will also feature 4 columns which contain Japan’s latest news including music, cult films and animations, manga artist interviews, and so on. Some of topics on the columns of the first issue are Pizzicato Five and Garo, Japan’s avant-garde manga magazine. PULP, meant to target the general adults will be an experimental manga magazine in the U.S. where comics are intended for kids.

Whether PULP causes a new phenomenon – businessmen holding manga in their hands! or stays the same as a general magazine for Otaku people, it sure will bring us a variety of Japanese cultural aspects. Containing 128 pages using newsprint, which is one of the aspects of Japanese manga magazine, PULP will be on sale at the end of November. You can subscribe it on the PULP site.