Anyone who’s been to an auto show or car dealership knows exactly how most car manufacturers show off their latest model. A car might be displayed on a raised platform, there might be a spotlight, or perhaps a stand with some basic information on it. Usually, that’s as technical as it gets.

In launching Saturn’s new SKY roadster, however, there was a desire to do something more, something different. Driving a roadster is a highly sensory experience, and Saturn and its agency, San Francisco-based Goodby, Silverstein & Partners, wanted to create an environmental display that engaged all the senses. The result was the Saturn SKYdome. 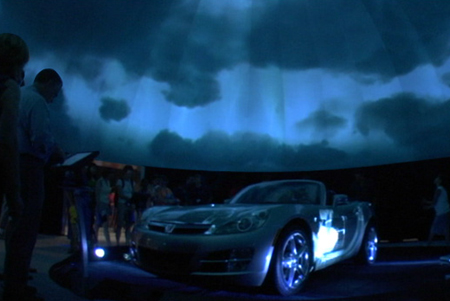 Originally, the SKYdome started out as a relatively simple concept: enclose the SKY roadster within a geodesic dome. The ceiling of the dome would become a 360-degree movie screen-a cross between an IMAX theater and a planetarium-onto which images of clouds and skies, treetops and stars would be projected. In other words, people standing inside the dome would be able to experience the peace and beauty of seeing the world through the eyes of a SKY driver, even as they were standing still.

But the idea progressed from there. Working together with Obscura Digital, a company specializing in immersive digital video experiences, the Goodby team also began to think about ways to show off the car’s engineering. Obscura had been experimenting with brand-new technology that could essentially take two-dimensional CAD animations (supplied by Speedshape) and map them to a three-dimensional surface. When applied to the SKY, the technique made the car look like it was shifting from solid steel to an x-ray view, similar to what is shown in the comps below. 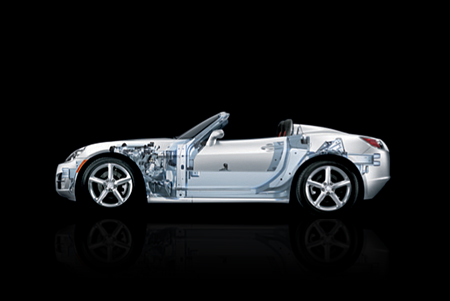 WIRED NextFest, an annual exhibition of new technologies, was the perfect venue for the SKYdome’s debut. It’s an event that draws a mix of exhibitors-from entrepreneurial geniuses to major corporations-as well as a crowd of early-adopter types looking for the next cool thing in transportation, entertainment, science, environmental technologies and more. 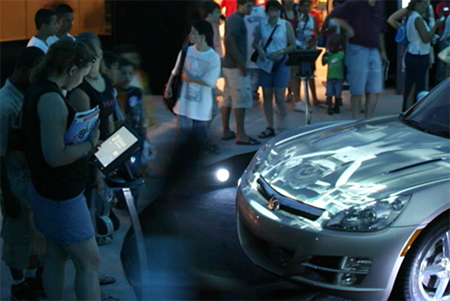 While the SKYdome team had tested the separate elements of the dome’s technology, it was impossible to test every element of the display together. In essence, the Goodby and Obscura team would have two days to build and troubleshoot the technology before the SKYdome opened to the public.