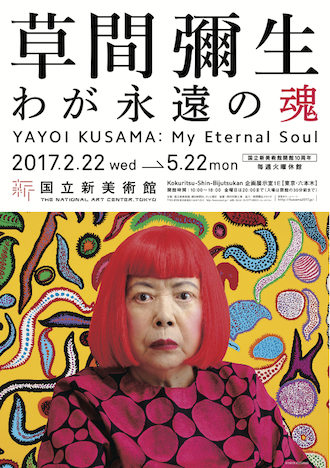 Yayoi Kusama is an avant-garde artist who is active internationally was named “The 100 Most Influential People” (TIME magazine, USA / 2016) as the only Japanese featured on the prestigious magazine, and “The Most Popular Artist in The World” featured by (The Art Newspaper, UK / 2014). The largest solo exhibition in Japan will be held from February 22nd to May 22nd at the National Art Center, Tokyo.

Yayoi Kusama has developed a wide range of artistic activities from painting, sculpture, installation, video, even novels and poetry, since she went to New York alone in the late 1950’s. She succeeded in her solo exhibitions at world-renowned museums such as Tate Modern (London) and Pompidou Center (Paris), and continues to attract a lot of people, including her large-scale solo exhibitions in Latin America, Asia, Scandinavian Islands.

In this exhibition, about 130 artworks of mainly large pieces of painting series “My Eternal Soul” which Kusama is vigorously working on from 2009 will be showcased. In addition, the whole works of creative activities from earlier dates to the present, such as works with polka dots are said to representating Yayoi Kusama. The net painting, soft sculpture and Infinity Mirror Room are comprehensively introduced.