American contemporary pop artist and collagist Barbara Kruger (b.1945) has developed her own style of art by combining poetry and politics with an advertising or propaganda vibe – recognizable from its bold declarative statements written in Helvetica Bold caps, sometimes Futura Bold or Oblique too, on red text boxes often over black and white vernacular photography culled from newspapers and magazines. Kruger appears as a visionary with her meme-like layouts made all the way back in the 80’s. Even successful fashion brands have channeled her graphic design approach into popular trends. “I try to make work that joins the seductions of wishful thinking with the criticality of knowing better,” the artist has explained. The Contemporary Museum of Modern Art – MoMA New York held “Thinking of You. I Mean Me. I Mean You“, a large-scale, site-specific commission covering the Marron Family Atrium’s walls and floor with printed vinyl, and which we were lucky to attend in its last week of exhibition. 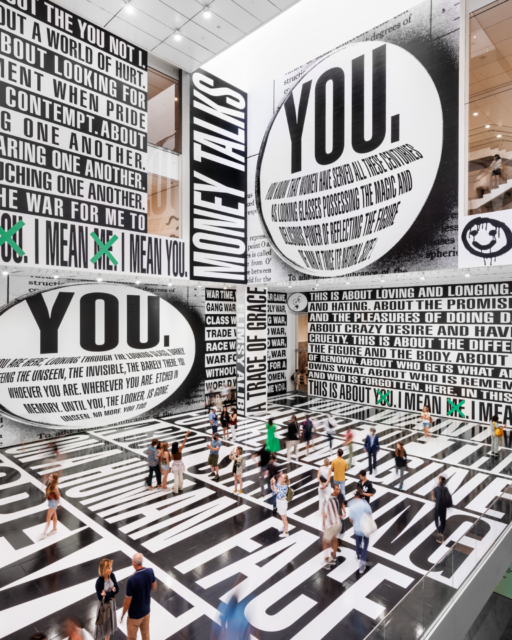 Her statements in Helvetica Bold have covered the halls and walls of museums around the world. Defined by MoMA as “bold textual statements on ideas of truth, power, belief, doubt, and desire”, Kruger is often seen as being part of a trailblazing group of women artists with a feminist discourse including Cindy Sherman, Lorna Simpson, Judy Chicago, Kiki Smith, and some others. Her photomontage and collagist style is clearly influenced by early twentieth century European graphic design, especially German propaganda in the 1920’s. Her work draws on, whilst also satirizing, the golden era of advertising she was surrounded by as a young girl growing up in Newark, NJ. She went on to study art and design at Parsons School of Design in New York and thereafter started out her career in the publishing world, designing magazines in Condè Nast like Mademoiselle and Aperture magazine with roles as photo editor too. Hence she represents the designer becoming an artist, the pop art, magazine and ad consumer repurposing the craft with a sharp critical lens. 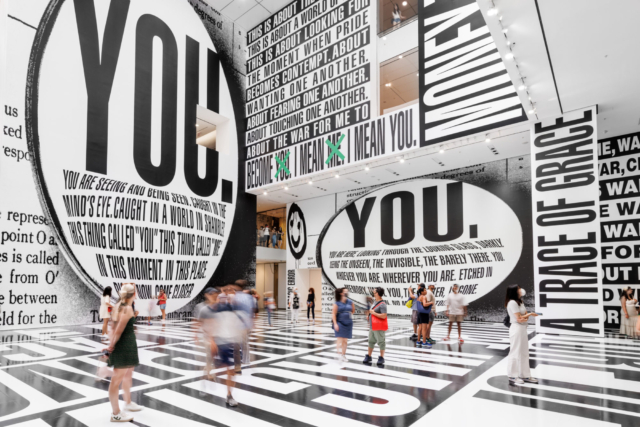 Furthermore, she impregnates her collages with a poetic sense by using terms such as “LOVING”, “LONGING”, “DAMAGE”, “FEARING”, “KINDNESS” – perhaps along the same lines as Warhol or Basquiat. She combines that poetic sense within a rather political approach – not just for the use of terms such as “WAR CRIME, WAR GAME” or “GREAT IDEA, GREAT DEPRESSION” but for her entire approach to her art – sometimes linked to John Heartfield or Man Ray and the Dadaism. However she once argued to a curator about him assuming such influence from Heartfield: “Oh, was he doing work on gender and representation? This is an appropriation of graphic capability enlisted in the struggle of genders. But, of course, he wasn’t thinking of that, because that would have meaning,” she explained.