In the exhibition area where 160 companies participated, there was always a line at the above-mentioned Niantic and 8thWall experience booths, and gadgets (devices) such as headsets, gloves, boots, AR walls. I was able to see many booths of start-up companies that introduced the latest technology.

Headsets were a wide lineup from lightweight Ray-Ban type to Oculus’s “Quest 2“, which is familiar in Japan, and Valyo’s “Aero” (20k dollars), which boasts the highest quality of immersive goggles. 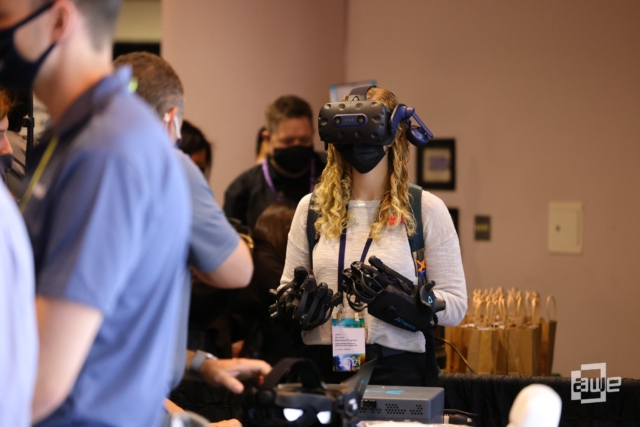 Visitors experiencing HaptX equipment. Air is sent from the wire along the finger, and the small bag inflates, so that the feeling of touching an object can be realistically reproduced.

There were various types of gloves, but HaptX’s glove-type tactile device that can give a realistic tactile sensation attracted the most attention and won the VR Award Grand Prize this year. In addition, as for boots for moving in VR space, those from Ekto, which can move while having the feeling of actual walking (actually not moving), have attracted attention also.

Ekto’s demo presentation video. The battery used to realize wireless drive was from Makita, a tool maker in Japan

Another content I was interested in was a real-time play by the Double Eye Studios called “Finding Pandora X” performed in the VR space, where the audience was in the VR space and professional actors. You can enter the world and enjoy the performance of the avatar (character) you play, also participate in the play, even fly in the sky, and have various interactive experiences.

This performance is attracting attention as a new form of entertainment, such as premiering at the Venice Biennale 2020 and winning the VR Grand Prize. It is still held irregularly, so if you are interested, please check their site.

This time I participated in a conference on such trends in XR technology for the first time, and as a whole, I felt that the world of science fiction drawn with “Avatar” and “Matrix” was just around the corner. Like Star Trek’s “Holodeck” experience, shortly anyone will be able to enter the world they want to see, where they will be able to experience training and various experiences with real-life experiences that are no different from the real world.

Just as the internet, smartphone, and game addiction are now a social phenomenon, it’s easy to imagine that in the Metaverse world, even stronger addiction will occur. While welcoming the evolution of technology, the time has come when individuals must seriously consider how to deal with it.