The joint exhibition Nine Journeys Through Time by the Municipality of Milan, The Royal Palace and Alcantara S.p.A. took place in the rooms of the Prince’s Apartment, the Royal Palace (Palazzo Reale Milano) from April 5th to May 13th, 2018. Alcantara S.p.A. manufactures a sophisticated material Alcantara® internationally used for various high brands such as interior decoration of deluxe cars.

In this exhibition’s 3rd year, 9 artwork by 10 groups of artists were presented in 10 different rooms. The rooms of the Prince’s Apartment were the major inspiration. These rooms contain tremendous creativity and the starting point of various travels. As the title implies, one of the major concepts, time indicates the process and conversation between artists, curators, media, and place. It is also a time where human beings live, in modern time and scientific time, which is hard to perceive. 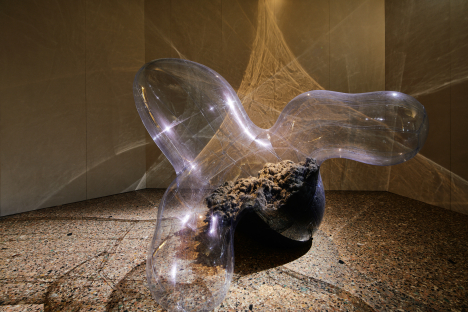 The travels start by opening a white curtain of Alcantara®. In the first room, the Desire installation by a multi-media artist a href=”http://eventstructure.com” target=”_blank”>Aaajiao who works in Shanghai and Berlin. In a transparent organic capsule, there is a muddy brown chunk. This brown object is a fragment of Alcantara®. He explores how it transforms into various shapes, colors, and textures and represents the microscopic world. 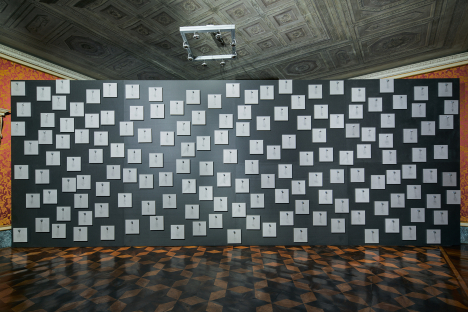 The second room is filled with an installation by a Swiss artist Zimoun. This work creates a tremendous space of sound by a large number of units, which are made by standardized media such as a motor and cardboard. DC motor and wire of Alcantara® are attached in the MDF box. The wire is beaten against the box by the high-speed of the motor and the sounds resinate in the room. That could be expressed as a singing voice of Alcantara®. The sight of the room is industrialized from the use of repetitive boxes. The artist intentionally did not color and manufacture the motor and wire to avoid added extra decoration. The hypnotic sound played by the huge avant-garde instrument is pleasing. 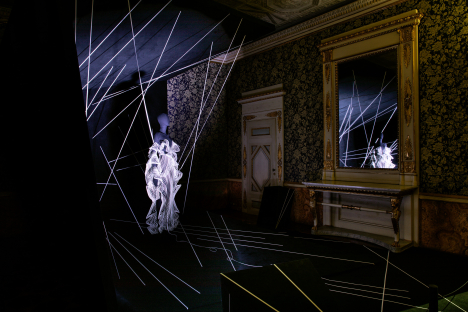 The Dutch fashion designer Iris Van Herpen who explores futuristic design and the Italian artist Esther Stocker known for three-dimensional geometric installations and murals collaborated and created the work Extended Indefinitely.d Their precise consideration and calculation created a beautifully curved and draped dress. It is made of thin threads, which are produced by Alcantara S.p.A. 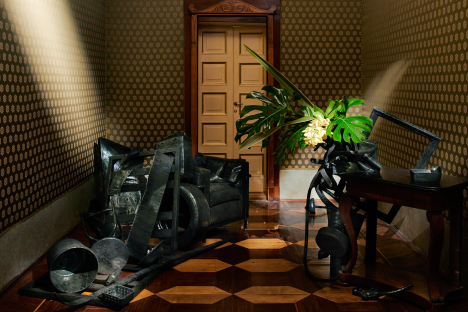 Eden by the Interior designer Andrea Anastasio who participates in projects of Islamic architecture in India and is inspired by anacondas. She prints the pattern of anacondas’ skin on the material produced by the Alcantara S.p.A. She transforms goods, which are used in our daily lives, into luxurious objects with the anacondas pattern. Among these objects, flowers are arranged boldly.