Your artwork incorporates the characteristic of using the Japanese traditional expressive techniques of ‘Mitate’ and ‘Yatsushi.’ For the people who looked at the Fusuma, I was left with the impression that they enjoyed searching for the hidden ‘moguri’ (mushroom). Why did you aim to make a “Nihonga which a young generation can enjoy too”?

Because I feel that there could be a way to stop the impression of Nihonga being something very old. When I am working on a Nihonga even friends will ask me “Nihonga… is that like India-ink paintings?” I have often had that kind of reaction, it seems that many people find it hard to get a sense of Nihonga. As the definition of modern Nihongas is not explained well I find it difficult every time. Up until modern times Nihongas were explained quite simply, but after the Meiji Period because Western oil paintings were introduced it become apparent that the term ‘Nihonga’ had to be used to create differentiation. So paintings which up to that time had just been treated as paintings in Japan (such as landscape paintings created using ink, Ukiyo-e (color print of everyday life in the Edo period) made from wood engravings, etc) all became grouped together as Nihongas.

Its just that, today if something has Nihonga art materials then regardless of what is painted or drawn it is classified as Nihonga, but there are so many different kinds of art. Traditionally, it hasn’t just been paintings of a pale beautiful woman wearing a kimono or tasteful scenery drawn in one color. In terms of modern abstract paintings, there are also fairy tale like glittering paintings. I really think it is good if my work can act as a trigger for children of the same generation to know some part of the various types of Nihonga. So because of that I want to make art which simply promotes interest in, rather than imparts knowledge about, Nihonga.

These images are based on the high resolution facsimile produced by the Tsuzuri Project. Unauthorized copying, duplication, or transfer of these images is strictly prohibited.

‘Mitate’ and ‘Yatsushi’ are Japanese traditional methods, but for example what artworks are left from the past? Furthermore, can you please introduce an artist or artwork that you like?

In many cases ‘Mitate’ and ‘Yatsushi’ have been confused as the same thing, I am still studying about it so I perhaps can’t explain very well (laughs). ‘Mitate’ is often used as a verb even now, and I think I kind of understand it, but initially I got to know about ‘Mitate’ as art from the Tohaku Hasegawa painting ‘Landscapes’ which are on sliding screens. There were sliding screens at Sangen-in at Daitoku-ji Temple in Kyoto at that time, and while the chief priest (of a Buddhist temple) was away Hasegawa snuck in drew in ink on the fusuma. On the white paulownia crest placed on the sliding screens he drew snowy landscapes by ‘Mitate’ with falling snow. He only had a little time but he had the energy and vigor to draw on top of 32 screens, and in spite of the danger from an angry art world if he had done it badly and made a mess, he had the guts and strong self-confidence of an artist to resolutely do it. It is thought that he was about 50 years old at the time, so he was really an old man with guts! I love that. By the way, as the fusuma that he drew on was so good it seems like he wasn’t censured.

In regards to ‘Yatsushi,’ in all honesty I don’t perfectly understand it. However, although it is possible I might make a mistake I will tell you about my understanding of it. Originally as a verb meaning ‘to change into an inconspicious form,’ there was a verbalization of ‘Yastsusu,’ for Kabuki and Ukiyo-e it was an expressive technique used to ‘express simply the latest fashions of those in power,’ ‘arrange latest fashions as a typical theme’ and ‘hide and endure one’s social status.’ ‘Mitate’ is what you can say to be showing something different using something from it’s origin, while against this ‘Yatsushi’ is limited to representing the real thing, even if that form and established shape changes the thing or person it represents doesn’t change.

For example, in the color woodblock print of ‘Courtesan as Daruma Crossing the River’ by Harunobu Suzuki, there is a beautiful woman of the time whose form is of the tale of the Daruma master who crossed a river between India and China via the leaf of a reed. The form has been changed to that of a beautiful woman, but the representation in this picture of that of a Daruma master. She is covered up to her head with a red robe, but it evokes the red robe of a Daruma master. Incidentally, a Daruma master is a great Buddhist priest that has become a model for Daruma auspicious objects used for praying for success in passing exams, etc. If you imagine a Hariko red Daruma doll, then you can see that the woman in the painting is copying something like that. 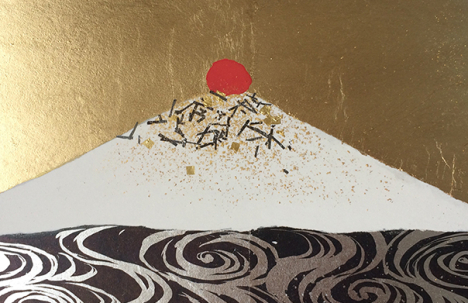 Your new artwork was exhibited at Cross Hotel Sapporo’s “Super Japan” exhibition held on the 25th and 26th of November in the same hotel at the Art Fair Sapporo 2017, can you tell us about the techniques and concept behind ‘Ezofuji (another name for Mt Yotei) Green Tea on Rice Painting’ (which is a Nihonga comparing Mount Yotei to green tea poured on rice using the Rinpa style)?

I have been trying to think of the Japan that I want to paint. Japan is the ‘land of the rising sun.’ The rising sun… morning… the beginning of the day…breakfast… as a result of going through these words I arrived at ‘rice with green tea poured on it’ which is kind of a standard dish for me. It is a play on words. On top of the rice there was a dried plum just like the image of a sunrise. Ezofuji is an alias for Mount Yotei. When I saw Mount Yotei for the first time in winter, it looked very beautiful as it was pure white with the snow that covered it. I was reminded of a dream of putting brown sugar syrup on top of it just like a delicious dessert, and like rice with green tea poured on it I developed an idea.

While painting I refered to Korin-nami – a decorative wave painting pattern created by Korin Ogata. A painter who expressed himself through Rinpa (major historical school of Nihonga), in Ogata Korin’s artwork “Red and White Plum Blossoms” you can see a peculiar wave pattern. Actually there is a theory amongst a number of other theories about Korin’s technique for creating waves, that he used a technique that changes the color of the foil he used via a sulfurization reaction with a sulphur as a kind of cooked foil technique. The sulfurized parts turned black, without sulfurization the ripples of the waves that remained would stay as the same color as the foil, but eventually the color of the ripples of waves changed over a long time due to a reaction with the air. Its an art work which I enjoyed because it included such a change.

In March 2018 you will hold your first solo exhibition at Clark Gallery + SHIFT, what kind of exhibition will this be?