Some say that 2017 is an art year occurs once in 10 years because the following three big art events all happen this year: Venice Biennale that happens once every two years, Documenta which gathers attention for holding the event in two cities, Kassel and Athene, and Skulptur Projekte Münster which has been through a long span of once in ten years since the starting year of 1977. Given the recent excitement of domestic art festivals in Japan, there is a special attention to this big year coming every ten years. Learning about the Skulptur Projekte Münster that has been pioneering for almost a half century should provide some clues when thinking about art in Japan as the term “regional art” was born and the relationship between art and the community is pondered. 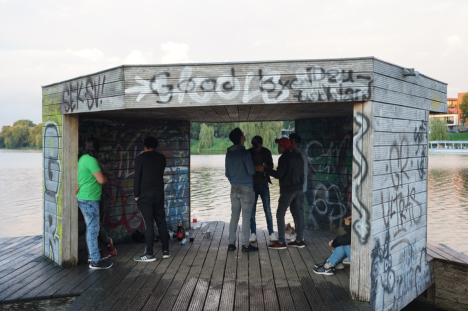 The work group that makes up the Skulptur Projekte Münster can be roughly divided into two. The projects to be announced for the first time in 2017 and the public collection that the city has purchased since the beginning. The public collections include works of prominent artists such as Donald Judd, Bruce Nauman, Richard Serra. Since these outdoor sculptures do not have any noticeable captions, people often do not realized that they are artworks. It seemed to question doubts about our perception towards artworks and sculptures. Transfiguration of works due to artificial reasons such as rust due to the passage of years and trash and graffiti, some works are covered with graffiti that you can not even imagine the state of the time it was made. But sometimes this rises as a strength of a work that can not be buried in the course of near half a century. Anyway, such a negative aspect is even a scene that symbolizes Skulptur Projekte Münster which has continued to develop art throughout the city rather than only focusing the existing values by the White Cube. Mr. Kasper König, an administrator since the beginning, means a lot to the event. In addition to the new development of every event, the style of showing past archives in parallel is one feature that is not seen by other art festivals. The team organized by Mr. König is playing a big role in mapping the present form of 2017 into the history of 40 years. 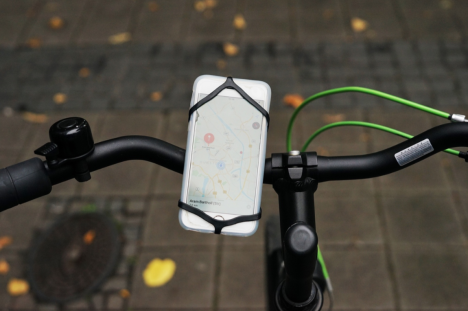 The view when application is in use

The last time when the event happened was 2007. This was the year that the very first iPhone was released. Smartphones, which are now used regardless of age and gender, are also important elements to the event. People can check the release of the application for smartphone on the event’s official website. It seems that the management side is making great use of it. In the application, they can access all necessary information such as location information, photos and text of artworks on the map. Also, as an elaborated feature, when the application opens, it always gets location information of users to alert them about artworks nearby. Because it’s recommended to go around the city on a bicycle, the event seems to set up the environment for participants being able to move around with a smartphone easily by selling rubber made accessories to attach a smartphone on a bicycle handle. 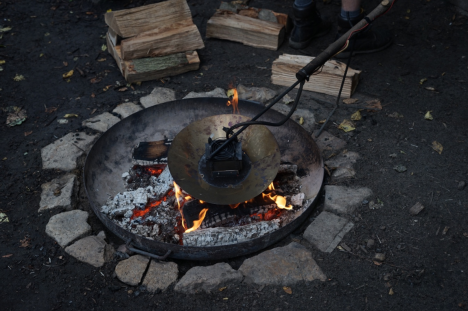 Looking at the project in 2017, it is interesting to look at Aram Bartholl’s work, “5V”, which shows a form like a response to situation of the current year. Aram Bartholl, based in Berlin, is an artist representing the era after the Internet appeared. He has been releasing works that develop virtual concepts into a public real city, such as “Dead Drops” which has embedded USB stick in the town and “Map” which makes pin icon of Google map actually appear as a huge sculpture. In Skulptur Projekte Münster this time, he has three projects, and “5V” is one of them. It’s located at a place like a small forest suddenly appearing in a residential area and seems like a bonfire at first sight. However, this can charge smartphones by converting the thermal energy, which is sensed by a sensor on the tip of the wooden rod, into electricity. In the wake of the earthquake disaster in Japan, the Internet has became strongly conscious as infrastructure like electricity and gas. This artwork straightly represents such a modern situation. The unique touch of backlashing contemporary society in such a very primitive way shows his ironic and funny aspects. It was cute to see a lot of audiences making a circle to charge their smartphones around the fire. Not only there was actual needs to charge smartphones since people were actually using the application and running out of batteries, via this artwork, it was good that they could experience the way of communication with others who share the same moment and place and the recognition of a hard life without a smartphone through smartphones. Since it was a rainy place, it was a comical and impressive work including staff who was struggling with fire management.