In 2017, Chih-Yang Chen graduated from the Royal College of Art in London. It is said that the art school has contributed to the development of art history such as modern British sculpture and pop art etc. I interviewed Chih-Yang Chen who provides various perspectives from the viewpoint of how individuals are involved with society, together with the science in particular and based on visual communication, producing all the works from careful experimental results, about the things underlying his expression in his works. 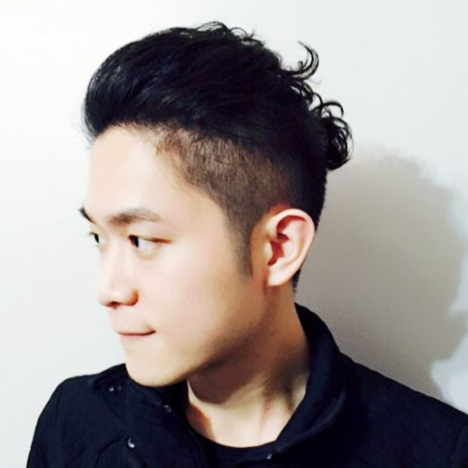 Please briefly introduce what kind of works have been created so far.

My works contain graphic designs and new media installations. During the time at the Royal College of Art (RCA), I flexibly experimented various media to communicate complicated concepts that contain lots of layers.

Here are some interesting projects I made in the RCA:

An interactive prototype that can mimic the movements of human skin. A small moving installation developed from record player that represented Orbital Resonance. An artificial tree made from branches I collected from Hyde Park, which implied the process of my self- identification during growing up. A video installation made by Processing(real-time video program) about the relationships between individuals in the internet society. An installation made with 7 mono prints and a slate that introduced my perspective to the relationship between humans, planets and the universe. 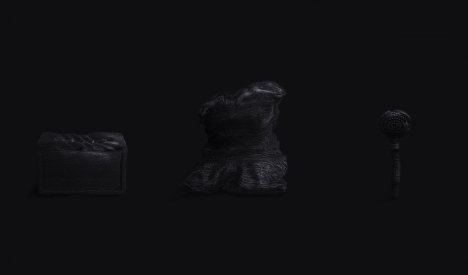 “Humans can only confess to Something rather Somebody”

A distorted object, especially made with 3D printer was very impressive in the exhibition “Humans can only confess to Something rather Somebody“. Please tell me the process of the work.

After I decided the topic — the indescribable connections between humans and objects when people are suffering from extremely harsh emotions, I knew that it will be a great challenge to communicate these subtle, abstract, and emotional relationships. The first thing that came into my mind was narrative films, the easier ways to illustrate emotions, and also what I am good at. However, I wanted something really strong and obvious, which needed to be physical, touchable, and so real that could communicate the feelings to audience directly at first sight.

In order to emphasise the connection between the objects and their owners, I made narrative film to illustrate what kind of terrible things happened to these people and why they confessed to objects. In the show, the objects were connected to the projectors to project the films on the wall, which made the whole installation became the “emotional connection” itself. The films explained the antecedent, and the objects themselves became the result of their owners.

The narrative films developed from my personal experience(I will explain in the next question). I extended it by collecting 60 plus stories, organised both symbols and visual languages into scenarios, and made an echo to the audience. The patterns on the objects were developed from EEG data, which was from the researchers at Imperial College. EEG is an equipment which record our brain waves; different emotions cause different brainwaves. In the beginning, the patterns were like infographic. I put my own feelings inside and created the second version, which became more honest and intuitive.

The films exposed some really difficult time of humans, which is impossible to tell anybody else about how one feels. The objects made the negative emotions and connections between humans and objects tangible, and became the symbols of the indescribable, hidden parts of humans.

Please tell me why you focused on the relationship between human emotions and objects.

There are some more personal reasons why I focus on negative emotions and objects. I suffered from depression and tried to commit suicide before, and I lost a really close friend when I was in London. These are similar to the films. I really know what the feelings are. During that time, I found that nobody could tolerate my pain, I had to swallow the most painful part inside. Therefore, since I couldn’t tell others, I confessed to a “thing” rather than a person.

I wanted to know how many people had similar experience so I started making interviews. Through the interviews, I received many similar feedbacks. Especially from “normal people”, who seems to have a good life, have a good family and some good friends. However, these make them even harder to tell others about their feelings when faced with something terrible. Nobody will try to understand and empathise people who live a “not so terrible” life.

This is the reason why I created three “normal” characters in the films. I wanted to show how despair and struggling they are. How alienated they are from their friends, families and the society. What they feel and experience. These are happening in our real life. The objects imply the result of these “normal people” once they face excruciating things.

It seems that this work was born from experiments of emotional communication. Do your works often come from some experiments?

I also played with materials, the most interesting one is using rotten foods and mould, however I did’t put them in my portfolio because the results were really disgusting… 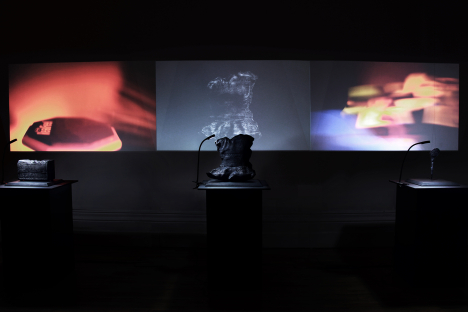 What is the most important thing for you in creating works? What is your inspiration?

I need to make sure all the elements I use are meaningful, and carefully focused on the symbols and connections between the elements. It is really important for me, and is also the criteria for me to evaluate the quality of works. Personally, I hate exaggerated works and decorations. Unnecessary elements will obscure the communication.

My inspiration always come from how individuals interact with the society, start from macro topics in the society and narrow down to each individual. How do changes in the society influence the individual? How people think about their position in the society? By using speculative ways, I want to provide different perspectives about the world.

Please let us know what is the potential and the charm of Visual Communication to you.

Visual Communication in RCA provided extremely conceptual trainings, which can be applied to various media. Since we are having more technology and media than ever before, it is really important to find the position in these technologies rather than just use the form of them.

I still remembered my personal tutor told me, “Don’t separate art and design, there are not much difference between them. What you need to think about is what do you want to communicate? Why do you want to communicate this topic? What do you want your audience to get after they experienced/watched your works? The most important question is, where is your position, and what is your contribution, to the topic you choose?” I have to say, these questions seriously changed my perspective to design, art, communication, even my life. Be responsible to the topic I chose rather than make something mediocre and grandstanding and just benefit from it. This is the most important thing I learned from Visual Communication.

Are there any scheduled projects coming? Please let me know what would you like to challenge yourself in the future.

Recently, I am going to do some commercial new media installations in Shanghai with some of my classmates. After, I will return to London and conduct my personal projects. I am planning to make a new series of works which will be about how humans treat their bodies. The bodies become the media, the tools used become symbols, the behaviour is the ritual, and the intention become the religion. Besides this project, I am interested in the symbolic meaning of the society. I will develop this topic in my future works.

For the longer target, I would like to engage in immersive works that combine holographic projections and rapid formed objects, and try to provide better ways to lead audience into my content.