“OUTERSIDE,” which had an exhibition December before last, came back to the CALM & PUNK GALLERY by Gas As Interface last December with a new member. Since there’s a relationship of mutual trust between Kenichiro Mizuno, Motohiro Hayakawa and Masanori Ushiki, Mizuno did not tell the other two members of Makito Takagi’s participation until they decided to have the exhibition. The exhibition, which started two years ago at Hayakawa’s suggestion, has changed gradually as they came up with new ideas. I am looking forward to their next project, so I asked each artist about this exhibition “OUTERSIDE 2.” 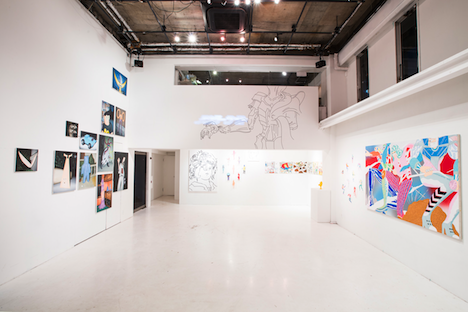 Last time there were silhouettes of various monsters and superheroes on the invitation card and this time there are four visual images of a character. Under the title of “human type,” Mizuno exhibited many human-like creatures. What image and story did you have when you drew the pink creature on the card?

Mizuno: As I mentioned on the artist statement “It is pursuit of defining varying humanoids. Let’s get rid of sci-fi-esque consistency of human beings, spacemen, or robots, and just devote ourselves on creating forms. My aesthetic is summarized in unconscious inferiority complex revealed by these paintings,” I made the piece without thinking about story and background on purpose. However, during the exhibition, I thought about that carelessly and it became a pupa of the android Andron from my narrative piece “Andron of the Uncanny Valley.” It is about 3 meters tall and grows up with the senses of Dr. Dron’s daughter. 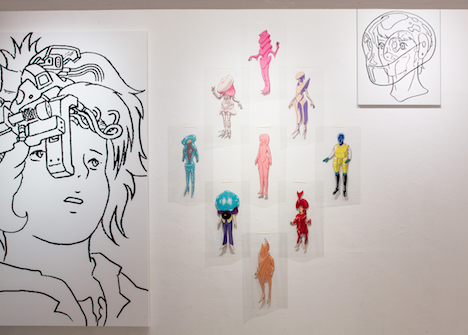 What concept do you have for simply expressed drawings “Future Boy B” and “BOGUE” ?

Mizuno: They have the same concept. I copied pencil drawings of characters of character reference from animation and the rough black lines are also an attractive point. I wanted to make it hard to know the size without seeing the real thing since today it is easy to find images on the internet. The title includes “VOGUE,” “protector (Bohgu in Japanese)” and “bug” and characters of the BOGUE series wear helmets and protectors. 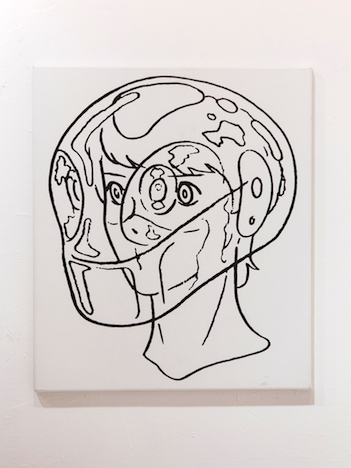 For this exhibition, he exhibited new pieces under the concept that he has decided. He used various materials last time and also projected an exhibition logo on his character drawn by tapes.