Following the success of the Echigo-Tsumari Art Triennial in the inland area of Niigata Prefecture, huge-scaled art festivals have been held in many regions of Japan in 2000s.

In fall of 2016, the first KENPOKU ART was held in North Ibaraki where it is next to the South Fukushima and 100 kilometers far from Tokyo. This region also got the huge influence of Tohoku earthquakes in 2011. As the restoration of the region from the disaster occurred, this event was held. Therefore, the Ministry of Economy, Trade, and Industry, not the Agency for Cultural Affairs, sponsors it. 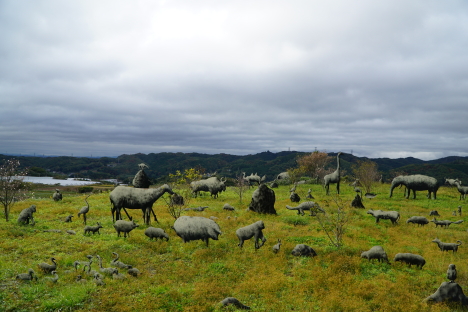 This region, comparably close to Tokyo, is the birthplace of Japanese modern industry known for a world-wide engineering company, Hitachi (comes from the city name of the region) and there are major factories of Hitachi. On the other hand, it is the birthplace of modern art developed by Tenshin Okakura. Inspired by such a pioneer spirit, the city of science technology Tsukuba locating in the south Ibaraki, and the influence of earthquakes, nature and science technology became the concept of this art festival. 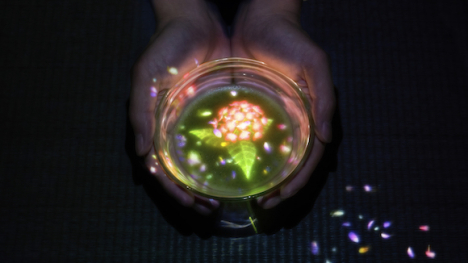 On the highway, from Tokyo to the North, you can see the coastal areas of Fukushima. Goura is the scenic spot of the seaside touching the prefectural boundary of Fukushima, where an artist Tenshin Okakura worked. The teamLab had the exhibition at the museum in honour of the origin of Japanese art. The exhibition by this well-known creative group, which is represented by Toshiyuki Inoko, attracted many much neighbourhood. Besides their old pieces, they exhibited “Japanese tea ceremony” styled piece that guests enjoy tea with colourful flowers projected on tea bowls. The carriage of the local aged master shows this is not new to show the enterprising spirit as the new “preparation” of Japanese tea ceremony that enriches conversations through tea. 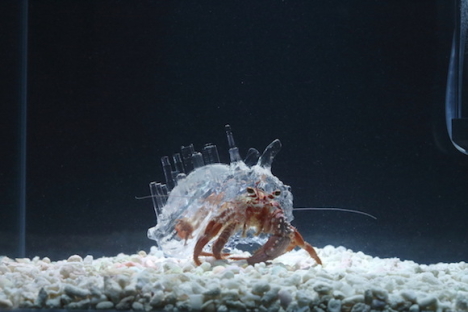 Why Not Hand Over a “Shelter” to Hermit Crabs? -Border-, AKI INOMATA, 2009- Courtesy of KENPOKU ART Executive Committee

In the villa of Hitachi city reconstructed from a hot spring hotel which was destroyed by Tsunami, they are projects of AKI INOMATA who creates in collaboration with other creatures are exhibited. She made shells for hermit crabs by a 3D printer and each shell symbolises an icon of worldwide cities. As the compilation, she exhibited 8 cities of them. The sophisticated transparent shells are beautiful like an ornament and viewers were surprised by that hermit crabs lived in those shells.