Amsterdam Dance Event (ADE), the world’s leading event for electronic music, took place at the capital of the Netherlands over 5-day period from 19th October. ADE is the world’s biggest club festival for dance music with over 2200 artists in more than 140 venues and 1000 events. In addition to parties and conferences for music industry, visitors could experience many sound-related art projects exhibited at multiple locations of the city. In this article, we introduce sound art projects and installations shown at the event, and the role that sound art plays in European music event. 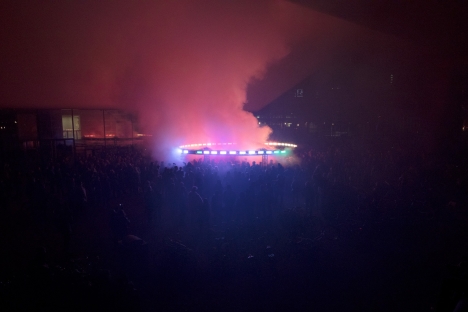 ADE’s official opening ceremony was held under the canopy of the Stedelijk Museum. “POLARIS”, a large-scale light installation that animates in accordance with human’s emotional response to music, was performed live by Fatima Yamaha, Nick Verstand, Nikki Hock, and Children of the Light. 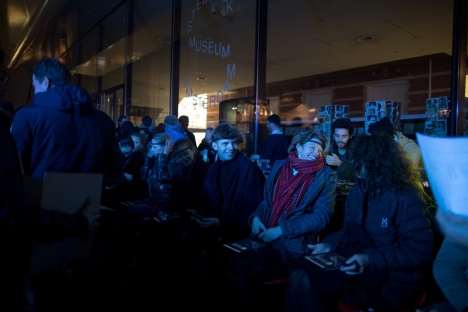 Measured brainwaves of 20 participants wearing a headgear were sent to LED panels forming circular shape and triggered the installation in real-time. Inside the circle was filled with smoke, and the audience was standing together and immersing themselves in the light and the sound. Artists and the audience co-created the piece together, and a sense of unity and happiness, similar to the good vibes of dance floor, was created. Visitors experienced the cycle of human emotion: one emotion was transformed to changing light and it triggered new emotions.

12 artists, chosen following an open call, exhibited their finished projects supported by Creative Industries Fund NL to the maximum of €7.500. One of the awarded works was “Neo” by Lola Gielen exhibited at Compagnietheater. Lola Gielen once tried to master the accordion but found difficulty to become a musician. Then she changed her mind and decided to create an instrument instead of trying to master an instrument. Lola Gielen’s idea was to make an instrument that everyone can intuitively play without a good sense of rhythm, perfect pitch, and years of practice. Neo allows players to enjoy various sound effects by placing small metal balls on circular matrix. The controller is made of soft silicon and it reacts to performer’s touch. Although Neo is an electronic instrument, Lola Gielen’s attempt is to preserve the sensory experience that is often lost in digital devices.