Extraordinary emotional fine art exhibition for abstract expressionism! It just almost makes your blind with all the greatest huge paintings, sculptures and photography. You stand inside of the exhibition right feel like you are in the shift of the world! After the two world wars, cold war, Spanish civil war, and the Great depression, how the art paradigm progressive move into a new spectrum.

This incredible collection is holding in Royal Academy of Arts from autumn 2016 to 2 January 2017. Just as one of the core meta-theories of abstract expressionism: direct. The main posters’ image puts Pollock’s painting with those great abstract artists’ name: Clyfford Still, Jackson Pollock, Willem De Kooning, Mark Rothko, Barnett Newman, Kline, Ad Reinhardt, Mitchell, and David Smith. Royal Academy of Arts maniac collects most of the greatest, influential abstract works all over the America.

The first room introduces the early work of abstract painting and sculpture, it contains Arshile Gorky’s “Water of the Flowery Mill” (1944) and “The Unattainable” (1945), it shows the blurred art -ish of combination with cubism, destructured, and surrealism. At the same year, Jackson Pollock made a milestone painting, “Mural” (1945) that established the dynamic of art shift. 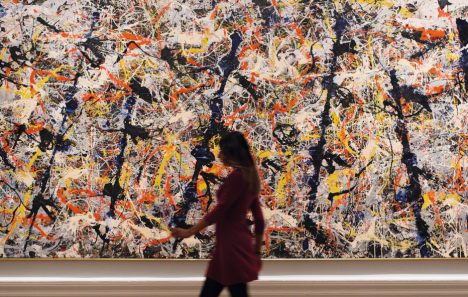 Go into the next room, Jackson Pollock’s artworks just overwhelming surrounded the whole white cube room. It just unbelievable astonished that “Mural” (1945) and “Blue Poles” (1952) these 2 radical painting are exhibited in the room that viewers can immersive themselves into the huge art or stand away to see the powerful of colours. Pollock took a new movement to create arts. Viewers can feel the aggressive intensity by the free brush tool, the poured and dribbed pigment to cover the whole canvas. After viewing Jackson Pollock’s black colour power “Night Mist” (1945), the darkly violence paintings ranged from Franz Kline’s “Vawdavitch” (1955), Robert Motherwell’s “Wall Painting No III” (1953), Lee Krasner’s “The Eye is the First Circle” (1960) all express the stark monochromatic colour and the US zeitgeist straight away. 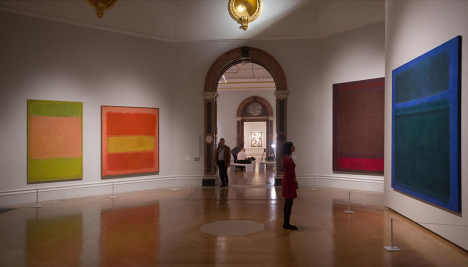 After the madness, extreme stimulated Jackson Pollock, you thought the exhibition has broken your imagination of this collection, no, not yet. The next space is the centered of the exhibition that presents Mark Rothko’s art, The iconic symbolism directly expressed the deep emotion, melancholic, gloomy image indicates survive and death. Opposite to “No. 15” (1957) is “Orange and Yellow” (1955), the significant difference between darkness and bright era of Mark Rothko. He mainly only named the arts with numbers, it raised the early post-modern theory: the freedom of explanations from viewers, art is completed with viewers’ participating by viewing. In his rectangular colour realms viewers feel the psychological condition, as the same time, we compose the art to make the colour transform to mood.