How did artists like Vincent van Gogh and Anne Sexton lead you to the renowned EMS recording studio in Stockholm?

Like I said before, this wasn’t part of a grand scheme. One thing just led naturally to another. EMS was started back in the Sixties and used to be part of the Swedish national radio. It was later spun off and is now run by a non-profit foundation that sponsors artists in residence and different kinds of experimental composition of electroacoustic music. They have like six recording studios furnished with state-of-the –art equipment and even own a very rare vintage modular synthesizer called a Buchla, which was invented by a guy named Don Buchla, who actually died just a few weeks ago. Anyway, when I approached them about the idea of putting a series of poems to music they liked the idea and gave me the opportunity of recording time and sound technician help. I was blown away. 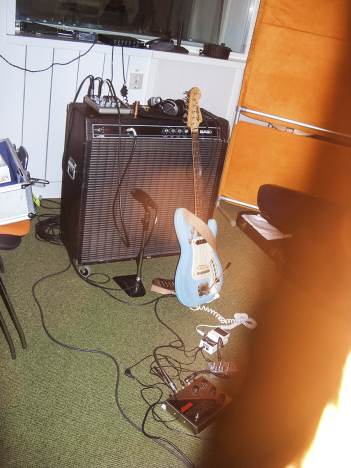 So was your idea to mix analog and digital music – like guitars with synthesizers and other types of electronic effects to create electroacoustic music?

Yes, exactly. For me, this project was a big crash course in recording since I’ve never done anything like this before, using this kind of infrastructure on my own. You basically record analog in one studio and then patch it over to another studio where you run it through a mixer controller. It’s crazy do be doing this all alone, back and forth, from one room to another. So it’s not surprising that I wanted someone with an outside-in perspective to do the final mixing. In this case, the task went to a close friend of mine, Jorge Navarro (Nomads OST), who lives in Madrid. Without him this would never have achieved the same professional edge. He made such an enormous effort to help me find the right path and then engineer my recordings.   There are four tracks on the EP and I wanted each one to have its own character. So I asked different friends around the world to do the mastering on each track. Whether working on their own projects or with other artists, they are truly amazing talents and I love them. If you just google on Oliver Ackermann, Björn Hansell or Johannes Buff and you’ll see some of the awesome artists they work with – they really kill it. So even though there is an overall vision for the EP, each of the tracks and poems has its own character and approach.

How did you get so many famous names to help you out on this project?

You know, it’s a really curious thing. I’ve struggled with many things over the years, both personally and professionally, and it’s not always been so easy. You hit barriers and you move on. “The Starry Night” poem opened up something special, the start of a journey. It was like good karma all way around. When I later mentioned the Rio Negro project to others in the business, they were extremely positive and generous with their time. The people at EMS, for example, were just amazing. They gave so generously of their time. They were also really cool about my request to film while recording at EMS, to capture this amazing experience. Here, I was very fortunate to have another close friend of mine, Knotan join me for a couple of sessions. He’s done some very nice documentaries for a variety of well-known Scandinavian musicians. He wanted to do a sort of a teaser film to place the project in context and serve as an intriguing kick-off. 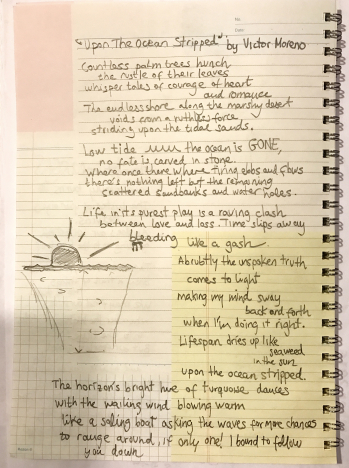 Upon The Ocean Stripped. Handwritten by Victor Moreno © 2016

You mentioned your own personal struggles. Are these reflected in the music and on any particular track or tracks?

Actually, I see the whole EP as a holistic expression that I intend to perform in a kind of show, but the approach is very inclusive. It could also involve other musicians. As a matter of fact I think of this EP as a common project with several creative talents to make it a reality both musically and visually. One personal example of struggle I can share is the track entitled “Upon The Ocean Stripped,” which grew out of an experience I had when vacationing on the island of Zanzibar in the Tanzanian archipelago off Africa.

I remember very clearly this one magical morning when the sun was glowing orange on the horizon and shimmering on the waves lapping up to the totally white sand – a spiritual and tranquil feeling. Later in the day, just before sunset, I went out to have a stroll on the same seashore. The tides had gone out and the ocean had literally disappeared. Boom. Gone. In place of the ocean was literally a kilometer of sand stretching outward. This sense of impermanence came over me. Nothing stays the same. Things you count on can change so rapidly in your life. It was right at the time when my girlfriend, out of the blue, left me but I didn’t even know it at the time.   So yes, “Upon The Ocean Stripped” captures a very intense personal experience. After this, I wrote “Lodestar,” which conveys a more positive view of eternity and what we care most about in life. The poem celebrates the people who stand by your side during life, no matter what – in love, death or friendship. It’s really a tribute to friendship.