Singapore’s National Day came early this year. Held on 9th August, this will be Singapore’s 51th year of independence. It was thus befitting that the National Design Centre (NDC) was decked out in red and white stripes (no less based on Singapore’s national colours), while National Day songs echoed across the triple volume atrium of a former convent school, now home to the Singaporean champion for Design. 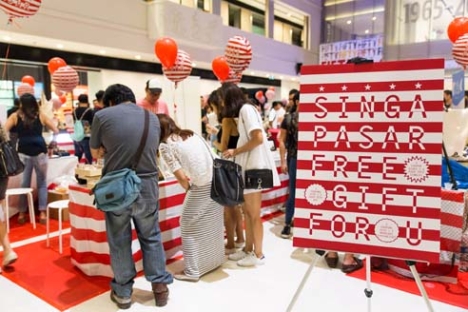 A carnival vibe filled the space as Singapasar (in Singlish [Singaporean English] fashion merging the two words Singapore with Pasar [Malay for market]) brought local culture, icons, craft, talents and design to the forefront. In this second installation, 35 different vendors curated a wide spectrum of Singapore on showcase. From artisan popsicles with a local twist, everyday kueh (read on), to quirky Singapore Souvenirs. 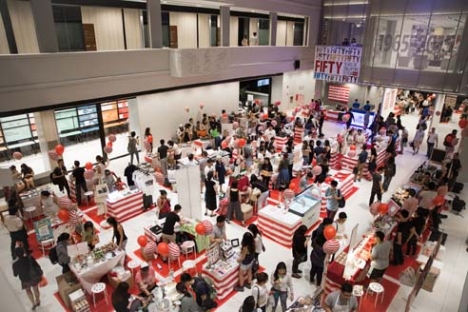 Singaporeans often lament the lack of good local souvenirs to give overseas friends. There’s only that many packs of Hainanese Chicken Rice pre-mix and Bak Hwa (sweet pork Jerky) that can fit into one’s suitcase. Here comes The Farm Store, the retail outshoot from award winning local interdisciplinary firm FARM. FARM collaborated with the Singapore Art Museum (affectionately known as SAM – we do love our acronyms) for the Made for SAM project in 2010 and the Great Singapore Souvenirs in 2012. Since then, the list of Singapore Souvenirs just keeps growing. From Agar Agar (jelly) door stoppers, to National Service (there is military conscription for all Male citizens) inspired water bottles, to a Merlion (a modernist creature that is half lion, half fish) ChouChou mini keychain, specially launched at Singapasar! 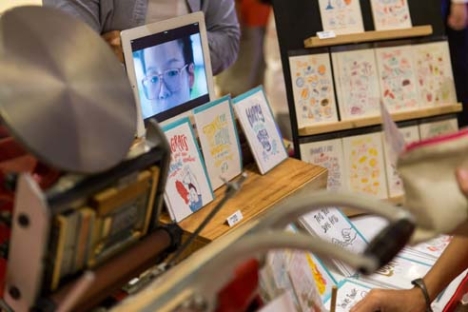 Local Independent bookstore, BooksActually makes an appearance with their selection of local publications through Math Paper Press, featuring local writers, illustrators and poets. Nuggets of local prose, fiction that peels beneath the veneers of the shiny concrete skyscrapers of Marina Bay uncover fresh insight to the Singaporean society and mindset. All shopping and no food makes for a dull time. Ji Xiang Confectionary brought a taste of traditional local flavour kueh (the Hokkien name for pastries) with their range of “Ang Ku Kueh” (literally meaning Red Tortoise Pastry [where no Tortoises were harmed], just glutinous rice flour dumplings with a sweet/salty filling, fashioned after a Tortoise shell). In vibrant shades of red, green, purple and yellow, each colour indicates a different filling, including a Durian (King of fruits) version! 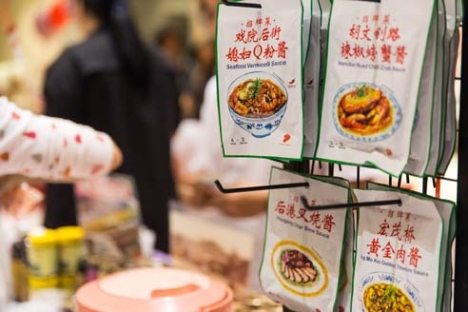 Want something more substantial than a pastry? Love Singapore cuisine, but bored of the same of pre-mixes of Laksa (thick vermicelli in a spicy coconut broth) or the quintessential Hainanese Chicken Rice? Signature Delicacies selection of 10 pre-mixed instant sauces promise to recreate those Singaporean moments. From the Hougang Char Siew to the Hamilton Chilli Crab, forgotten moments and places are recreate on one’s palate, sealed in a slick retro pack. 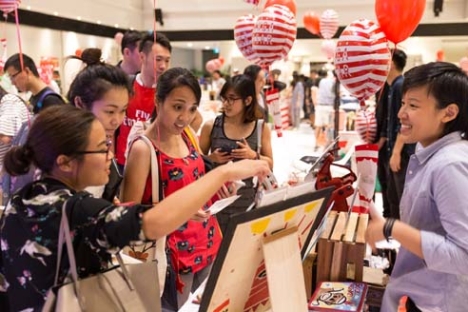 Singapasar is a celebration of all things local, all things Singaporean. A tinge of nostalgia, mixed with modern graphics reflects upon Singapore’s attempt to make sense of its evolving identity in a fast paced globalised world.