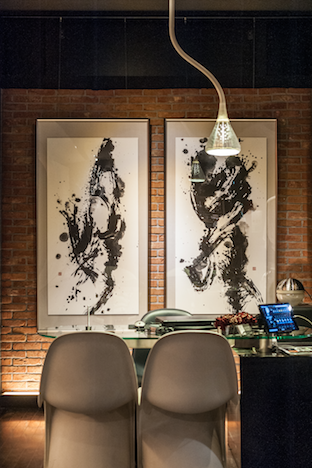 The exhibition titled “In-Ei” was written for welcoming people at the entrance of the hotel. Chinese character has many meanings in a letter. A Japanese word “In-Ei” has a meaning that is “with variety of color, sound and emotion”, it’s deeply sentiment. 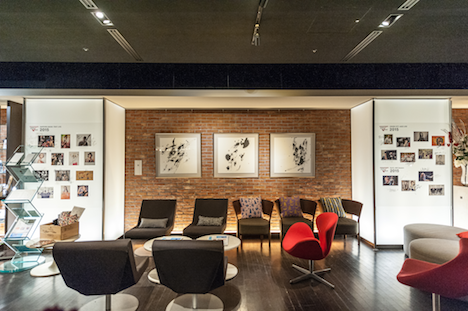 Following “In” and “Ei”, 3 letters “Koe (voice)”, “Sai (color)”, “Hibiki (echo)” were exhibited. As previously told Yamaguchi’s works are based on “poem”. If you see the “works” with “titles” and “poems”, those every essence are linked and you will have sympathy for the poem, deeply understand for the calligraphies and deepen your emotion for the expression.

After you enter the meet lounge through the lobby, 10 works were seen on the expressive wall like modern wallpaper, red brick and so on. 3 series: “colors” image of the poem about color with light ink, “sound scape” image of sound, and “emotions” image of emotion were exhibited by order. Each subtitle was from words in the poem.

Looking works closer made you find that light ink distinctively stained on the paper. Nobody can copy it. There seems to be a secret way to adjust the quality of paper and the ink. Especially fine technique for the ink and rarely talented expression stood out. The flow of the light ink on one work was like black and white photo that caught a moment of river surface and it made us think of transition of light and shadow. It was sometimes vigorously scratchy and sometimes very elegant as silk bending to the wind. 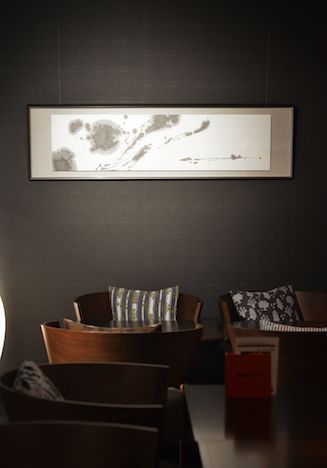 Passing through the meet lounge to the right, you see an oblong work “darkness: small galaxy called as In-Ei” on the wall. There was also a pair piece “light: before long” further inside. 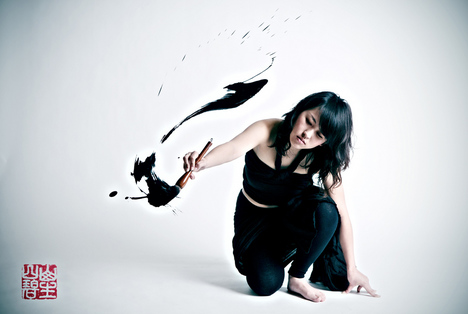 Yamaguchi called herself as “Japanese Calligrapher” in English. She has been doing trial and error of brush expression for making people who don’t know Japanese understand the meaning of the letters. She thinks, however, because people don’t know the meaning it may become a pure art. Even Japanese will be able to see her works as pure art with the beauty of brush expression if we don’t have stereotype for calligraphy.

In the end of the performance, she said, “Japanese heart which can catch even small changing is treasure”. “If you imagine something you have to make it real. Otherwise people can’t feel it”. Important thing is not only the style of expression but catching the shadow. She is looking for the possibility of calligraphy and trying to tell something over the wall of words and genre.