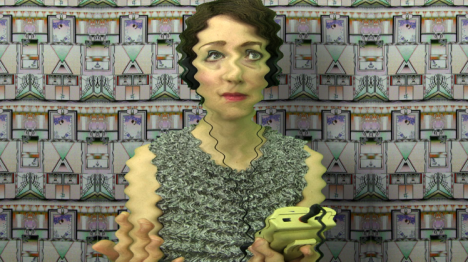 There was a Bio Feedback Machine, which controls the body condition by brainwave and blood pressure, at the lobby on the second floor of the art center. It was made based on the assumption that monitoring internal and physical response and training the mind would control the human body. Visitors actually could sit down on the sofa equipped with the system and wear a measuring device. You can see the condition of your body.

The video screen in front of the sofa shows Cynthia who is taking bath and plugs in Mind Place Thought Stream Bio Feedback System. Her body function is measured and reported with sound and light. The images that she wanders the labyrinth of her brain are screened on the tiles of the bathroom. As if she starts getting into the meditation. Welcome to Cynthia’s world. This is the entrance of the magical world. Watching this video and sitting deeply on the sofa, you will find that the flashing orange signal is changed to green color. Mysterious steam rises from the back of the sofa. Your breath is now calm. This is an experience that the mind controls the body. 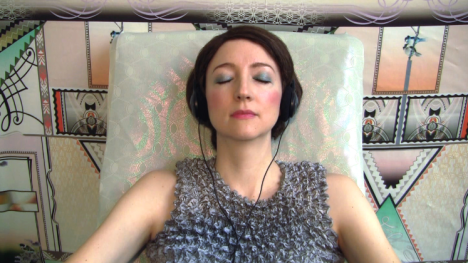 The curator of this exhibition, Ceci Moss explains “Long standing cultural and philosophical assumptions are packed into this small device, from the basics of cybernetic feedback to Descartes’s mind / body split.” Objects are actors in Shana’s works and play the role of 2 faces: the object itself and the function, which affects the human. This duality is seen between mind and body as well.

Video work “Mind Place Thought Stream” (2014) was exhibited at the gallery space. In this video, Cynthia struggles with IBS through heating pad, biofeedback machine, ASMR, and Activa-brand yogurt. The story is fragmented like a dream in the surrealists’ film and not narrative. Motives in the video are vividly impressive. You may feel seeing a daydream. 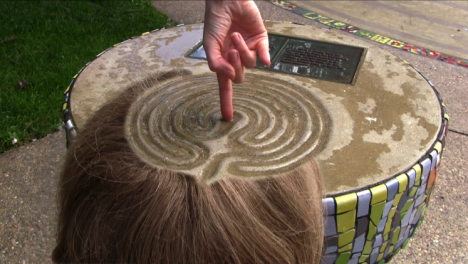 Cynthia is using a magical globe, which makes the objects wiggle as if those are connected to the 3 dimensional world. She starts having stomachache and purchased a biofeedback machine on the internet. Magical globe enables her to get the product shortly. The machine leads her to the meditation world. She finds herself in the field in front of a wood house. She enters the house as if somebody calls her, and starts wriggling and dancing. And she finds a yogurt and eats it. When she closes her eyes, the scene changes to the TV ad of Activa brand yogurt. The dance was same as the one, which an actress was doing in the ad to express the integrity and transparency of the brand. She finally arrives at somewhere on the beach. Siren-like whispering voice echoes and leads her to another labyrinth. You may feel like you’re in the painting of Dali. The door of puzzle pattern suddenly appears and Cynthia opens it. She now enters the world filled with happiness made by meditation of right brain. It is the moment she is released from the physical pain. This story might has a dialogue about common conscious as people want to grab a straw to escape from the suffering and internal peace as the moment after the problem is solved. 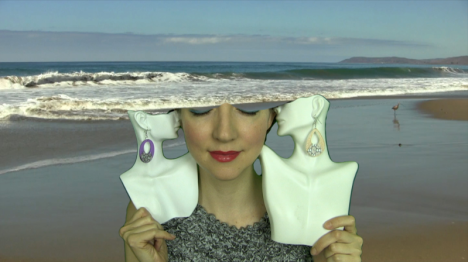 In the middle of the video, you’ll listen to the hit song by k.d. Lang “Constant Craving” played forward and backward, with a repetition of the chorus “Constant Craving … has always been.” As in Shana’s other works, the mute, curious Cynthia tries to heal and find happiness, but contentment somehow eludes her. Constantly craving, Cynthia strives for an unfulfilled betterment that is both spiritual and physical.

In the era of smart environments and the internet of things, objects and the space we inhabit have become animated, responsive, and lifelike much as Cynthia’s own world. But their inner workings are obscured, and as such, they take on a mystical, otherworldly quality. Building off these circumstances, Shana’s signature psychedelia opens up an environment we already inhabit.