One of the American National park, Alcatraz island is famous for the history which was a prison island, “the Rock”. Since the island is surrounded by peculiar drift of the tide, people said it was impossible to escape and extremely wicked criminals were sent from all over the U.S. till 1963. Many tourists visit the island now to see the prison site and also distinctive nature and wild birds.

Chinese artist Ai Weiwei develops his project “@Large” on the stage of this Alcatraz island. 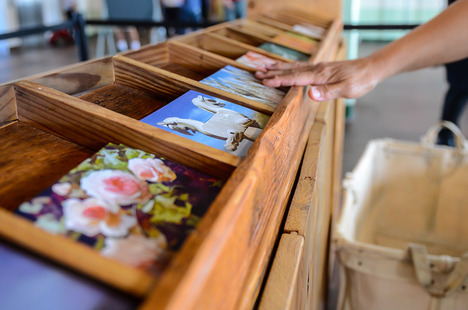 “Yours Truly” offer visitors the opportunity to correspond directly and personally with individual prisoners. Photo by Alison Taggart-Barone, Parks Conservancy

Ai Weiwei is a Beijing-based artist and activist whose work encompasses sculpture, installation, photography, film, architecture, curation, and social criticism. May 2008, the Sichuan earthquake happened and many students were crushed under the school buildings. China government refused family’s protest and even didn’t disclose the details of the accident. In response to these situation, Ai Weiwei started a project through his blog which investigate for the truth. China authorities placed him under house arrest in 2010. After his studio was on suss of the tax evasion charge, he was constrained from the government. People can catch his question, critics, and message against the modern society and politics from his works.

Even though he was released, he is still not allowed to go out from China. Regarding to this exhibition at the Alcatraz island, he had to proceed the production at the studio in Beijing without actual visitation. Visitors will feel his message with the actual jail facility and its air. What is freedom, justice, human rights and responsibility…? His storing thoughts which are from himself who can’t come to the island lead people to imagine and sympathize much more realistically something at the prison.

New Industrial Building was the place where the prisoners worked for laundry of army uniforms and production of shoes and clothes of the government. You can see 3 works, “With Wind”, “Trace”, and “Refraction”. 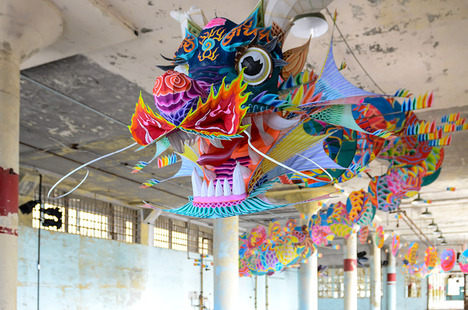 “With Wind”: Chinese colorful traditional kites are hung from the ceiling. A dynamic dragon kite welcomes you at the entrance of the building. Dragon which is mythical symbol in China seems to be an icon of the authority of the empire. Ai Weiwei however explains that this dragon rather shows individual freedom. “Everybody has this power”. Long wind body of the dragon is made with individual kites on which you can read quotations from activists who have been imprisoned or exiled, including Nelson Mandela, Edward Snowden, and Ai himself.

Scattered around the room are other kites decorated with stylized renderings of birds and flowers. These natural forms allude to a stark human reality: many are icons for nations with records of restricting their citizens’ human rights and civil liberties.

By confining the kites inside a building once used for prison labor, the artist suggests powerful contradictions between freedom and restriction, creativity and repression, cultural pride and national shame. He also offers a poetic response to the layered nature of Alcatraz as a former penitentiary that is now an important bird habitat and a site of thriving gardens. 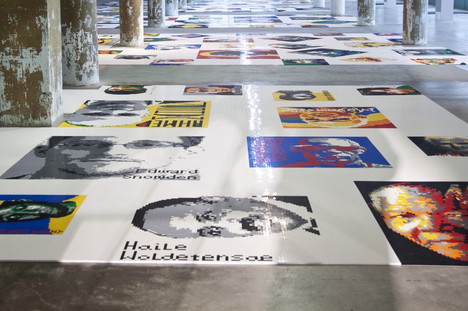 LEGO brick portraits of 176 prisoners of conscience line the floor of the New Industries Building in Alcatraz. Photo by Alison Taggart-Barone, Parks Conservancy

“Trace”: The exhibition follows to the next room where the floor is filled with faces made with LEGO bricks. More than 175 faces are all activists’ from around the world like Aung San Suu Kyi and Martin Luther King, Jr.. They have been imprisoned or exiled because of their beliefs or affiliations, most of whom were still incarcerated at the time the artwork was made.

Assembling a multitude of small parts into a vast and complex whole, the work may bring to mind the relationship between the individual and the collective, a central dynamic in any society and a particularly charged one in contemporary China. 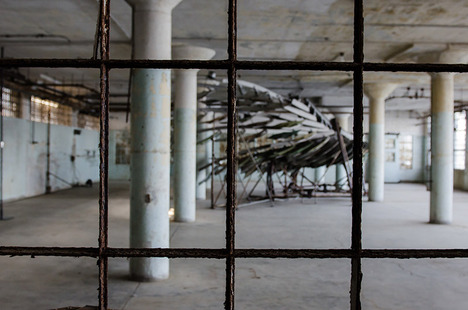 Visitors peer through cracked and rusted windows from the lower gun gallery where guards once monitored prisoners at work to get a glimpse of an enormous metal wing called “Refraction.” Photo by Ryan Curran White, Parks Conservancy

“Refraction:” Gun Gallery in this building was a long narrow passageway where armed guards once monitored prisoners at work.  You will see a huge metallic wing from the broken windows. Designed by actual birds’ wings, but in place of feathers, the artwork bristles with reflective panels originally used on solar cookers in Tibet, a region that has long struggled under Chinese rule. 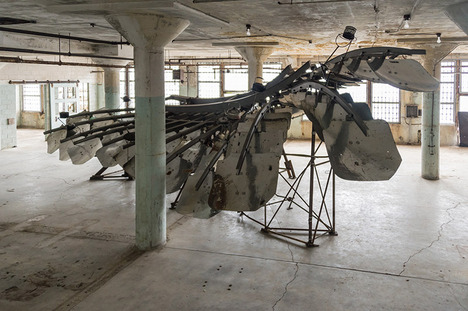 Like “With Wind”, the motive of fly makes you image freedom, while the material is metal which weights more than 5 tons. And at the same time, you may imagine its array of solar panels silently mustering energy, preparing for takeoff.

Away from the New Industrial Building, you can see 4 works at the prison building. 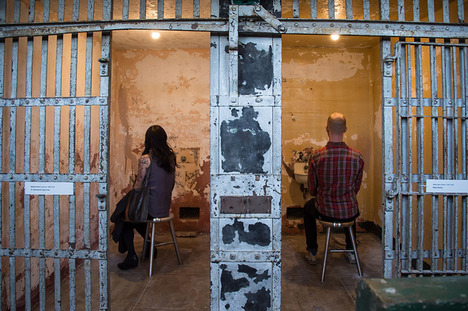 “Stay Tuned”—this work allows visitors in A Block, Alcatraz, to sit and listen to spoken words, poetry, and music by people who have been detained for the creative expression. Photo by Alison Taggart-Barone, Parks Conservancy

“Stay Tuned”: Voices from each cell which is narrow and doesn’t have window. Visitors are invited to sit and listen to spoken words, poetry, and music by people who have been detained for the creative expression of their beliefs, as well as works made under conditions of incarceration. Each cell features a different recording. The diverse selection includes the Tibetan singer Lolo, who has called for his people’s independence from China; the Russian feminist punk band Pussy Riot, opponents of Vladimir Putin’s government; and the Robben Island Singers, activists imprisoned during South Africa’s apartheid era.

Heard inside a cell, speech and singing create a powerful contrast to the isolation and enforced silence of imprisonment. 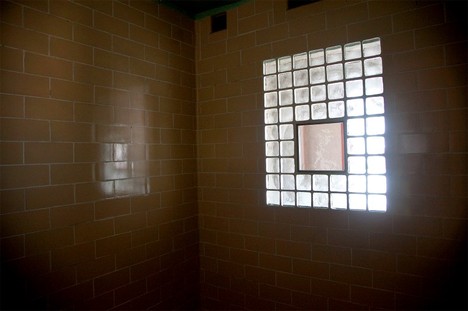 “Illumination”: One of the most haunting spaces in the prison -a pair of tiled chambers in the Hospital once used for the isolation and observation of mentally ill inmates- resonates with the sound of Tibetan and Native American chanting in this austere and moving installation.

The work pays homage to people who have resisted cultural and political repression -whether Tibetan monks, Hopi prisoners, or the Indians of All Tribes who occupied Alcatraz from 1969 to 1971. The placement of the chants in the psychiatric observation rooms suggests an unexpected analogy: like subjugated peoples, those who have been classified as mentally ill have often been dismissed, deprived of rights, confined, and observed. Under the severe circumstances of incarceration, chanting could serve as a source of emotional comfort, spiritual strength, and cultural identity. 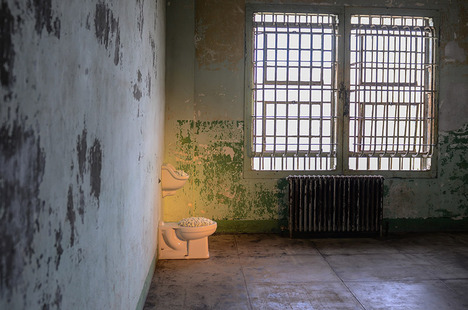 “Blossom”: In this work, Ai Weiwei quietly transforms the utilitarian fixtures in several Hospital ward cells and medical offices into delicate porcelain bouquets. The artist has designed intricately detailed encrustations of ceramic flowers to fill the sinks, toilets, and tubs that were once used by hospitalized prisoners. 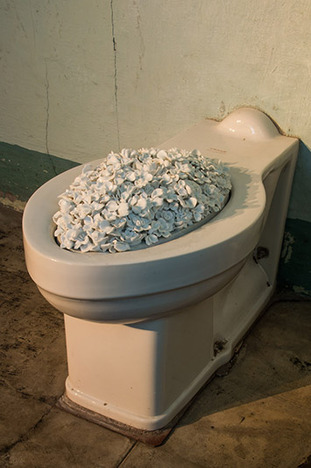 Like “With Wind” in the New Industries Building, “Blossom” draws on and alters natural imagery as well as traditional Chinese arts. Rather than referring to national iconography, however, the flowers here carry other associations. The work could be seen as symbolically offering comfort to the imprisoned, as one would send a bouquet to a hospitalized patient. The profusion of flowers rendered in a cool and brittle material could also be an ironic reference to China’s famous Hundred Flowers Campaign of 1956, a brief period of government tolerance for free expression that was immediately followed by a severe crackdown against dissent. 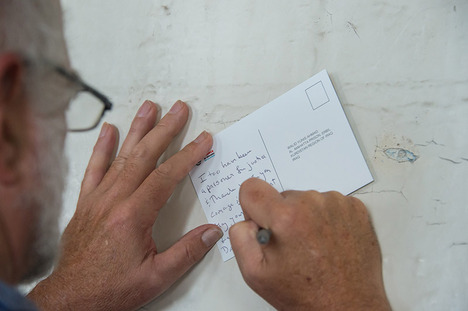 “Yours Truly” offer visitors the opportunity to correspond directly and personally with individual prisoners. Photo by Alison Taggart-Barone, Parks Conservancy

“Yours Truly”: While several other works in the exhibition expand visitors’ awareness of prisoners of conscience around the world, this installation in the Dining Hall offers visitors the opportunity to correspond directly and personally with individual prisoners. Visitors are invited to write postcards addressed to some of the detainees represented in Trace, the series of portraits in the New Industries Building. The postcards are adorned with images of birds and plants from the nations where the prisoners are held. Cards are gathered and mailed by @Large Art Guides.

Ai Weiwei has spoken of the deep feeling of isolation that afflicts incarcerated people. He says that political prisoners often fear that they -and the causes they fought for- have been forgotten by the outside world. This work is a response to those concerns, reminding detainees that they are remembered -and reminding exhibition visitors of the detainees’ individuality and humanity. In the spirit of free expression, visitors may write any message they wish. Yours Truly brings home ideas at the heart of the exhibition: the responsibilities that we all bear as members of a community, and the importance of communication as both a personal expression and a force for social change.