“Instead of showcasing the world’s art in Japan, this is an unprecedented biennale that showcases Japanese content to the world,” artistic director of the KOBE Biennale 2013 spoke Masao Omori with great eagerness. Along with the Aichi Triennale and the Setouchi International Art Festival, the KOBE Biennale is one of the largest art events in western Japan. This year’s Biennale’s theme was “saku (to blossom).” Contemporary art is not the only genre of art in this Biennale. Instead, anything that comes out of Kobe is considered art; art has always existed in this familiar environment in which Kobe citizens grew up. This year’s theme conveyed a hope that the people of Kobe would realize the ubiquity of art, overcome the Great Hanshin Earthquake, and be culturally creative. 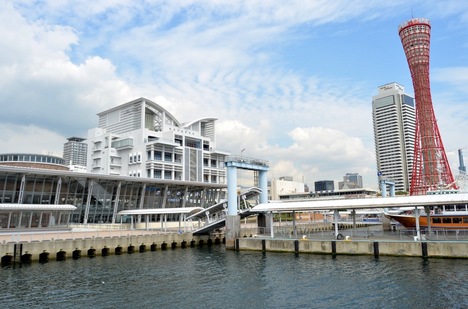 The area from Meriken Park to Kobe Port became the Biennale’s venue.

The Biennale was certainly unique. It expanded beyond contemporary artworks like installations to include paintings, large design exhibitions that took advantage of the port and surrounding space, flower arrangements and traditional calligraphy, as well as toys and games. This was a Biennale that could be seen, touched and experienced interactively, involving the entire family-friendly city of Kobe. 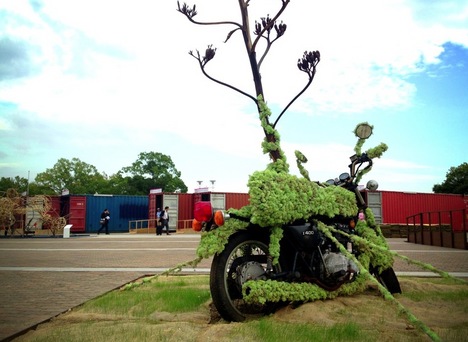 72 works of art displayed inside and outside of transport containers in Meriken Park.

Artworks that let visitors experience the sea were displayed in the exhibition spaces in Meriken Park and the Kobe Port area. From a total of 138 artworks that entered the “Art in a Container International Competition,” 25 winning pieces were displayed in transportation containers. Several installation pieces that acknowledged the sea in some way could be seen in the limited 40-foot containers. 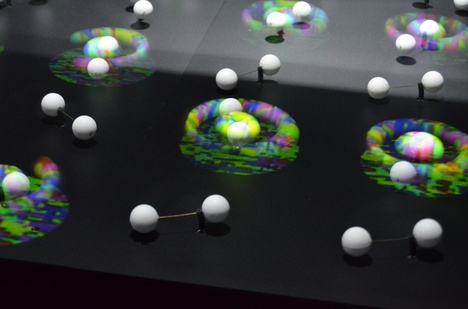 Takatomo Anzo’s “Light Flower of Two Faces” won the KOBE Biennale Grand Prize. Its story begins when you press the “Push” button. An image is projected and a creature-like rotator appears. Suddenly, the image disappears and strobe lights flash, revealing what was hidden. The piece’s originality lies in the focus on something small, instead of using projection mapping to present images on large buildings. 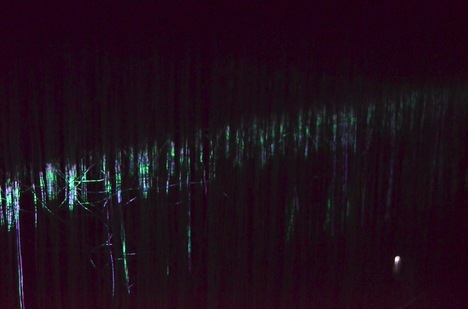 circle side “interweave no.2”

Circle side’s “interweave no.2” was a Runner-Up in the competition. The 5,500 pieces of hemp represent the media. They respond to visitors’ body temperatures, and their colors change depending on the number of people there are in the room. Digital light reflects on the hemp yarn, and different colors glitter up and down the strands of hemp. This piece urges us to reflect on our interactions with information as well as on the media itself. 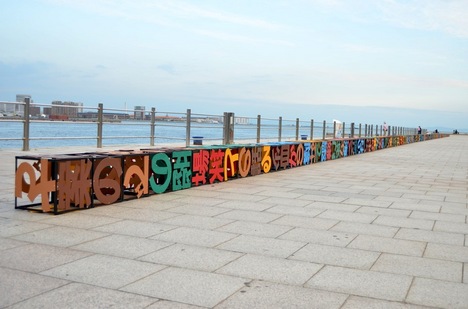 Taking advantage of its waterfront location, pieces exhibited in the SHITSURAI ART International Competition freely expressed the traditional Japanese spatial composition concept of “shitsurai,” or space decoration for formal occasions. This was an international exhibition that made full use of Kobe’s environment.

The youngest award winner in the Biennale, Nono Ohnishi’s “Irregular serial ‘AIDA village’s folklore ~vol. 1 The first step to begin~’” is a 90-meter long object displayed by the sea. Visitors could read folktales while enjoying the seascape. 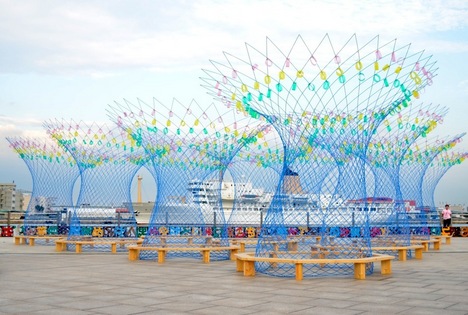 “FRP FABRIC SAKU” by architect Kazuya Iwaki and the Tokyo Denki University Iwaki Laboratory are rainbow-colored objects shaped like morning glories that drew our eyes. Depending on the space and environment, the 10 objects can link together. Expressing this year’s theme “saku” well, this was a refreshing piece.

“Starry sky view” by Kenichi Shikata, which was a Runner-Up in the Art in a Container International Competition, cuts out and fragments its surroundings. As visitors stick their heads into the flower bud-shaped hole, the visitor’s own image reflects inside the space along with lights, and becomes one with the view of the ocean that could be seen from a different hole. 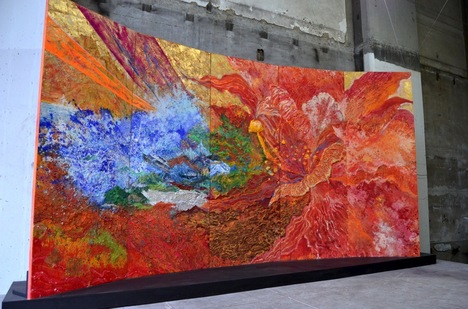 The “Painting Art Exhibition” was held underneath the elevated railroad tracks in Motomachi. This was a new endeavor in the painting category with a view to provide artists with the opportunity and space to create large works they usually cannot create. On walls measuring over 4 meters wide, paintings were drawn freely. All the paintings were full of life. 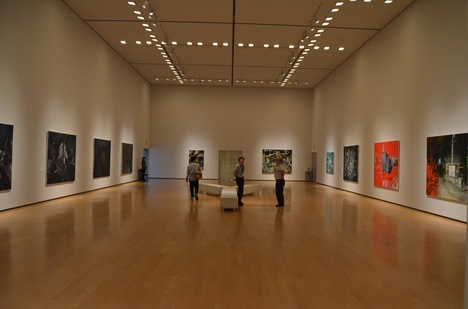 There were more works and venues than introduced here. The Hyogo Prefectural Museum of Art, the Yokoo Tadanori Museum of Contemporary Art, and the BB Plaza Museum of Art also planned exhibitions for the Biennale. The subtitle of the KOBE Biennale was “Encounters with Art in the Port.” On this occasion, when the entire city of Kobe was wrapped up in art, experiencing the city, its history and the diversity it offers surely led everyone to “saku” as well.