Thurston Moore cannot stay idle, like the other components of Sonic Youth, when they don’t play together they are involved in some other thousand different projects. Although Thurston continues touring due to his solo album produced by Beck last year, “Demolished Thoughts,” he assembled a new band: Moving Light Chelsea. Even though, he still finds the time to team up with discaholic friend Mats Gustafsson – a Swede living in Vienne, Austria who has his recognition within the European free jazz scene – so they can enjoy their akin vinyl’s collector addiction and do some drones and musical improvisations together. They initiated collaboration in 2009. Now they have rescued a few sessions recorded between New York and Philadelphia, `Play Some Fucking Stooges´ is their first duo album, which will see a second volume coming out by the end of 2012, both vinyl in limited series. Mats shatters eardrums with his creaky sax. It is strong and acute, after gone through the blender. Thurston keeps impassible with his characteristic analog and distortion set, among drumsticks and screwdrivers to hit the strings of his Jazzmaster. They play occasionally, as much as other projects left room for more free dates together. We had the chance to catch up with them and talk to Mats to dig a little bit more about the wall of noise and what this joint project means. 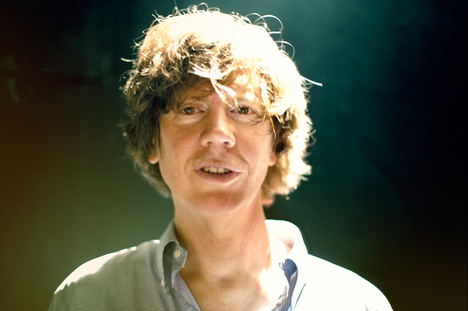 You have been playing together for a few years. How the idea of such collaboration evolved?

We had been collaborating in “discaholics anonymous trio” (with Jim O’Rourke) and in my Original Silence outfits as well as with Sonic Youth and now in duo since some time. 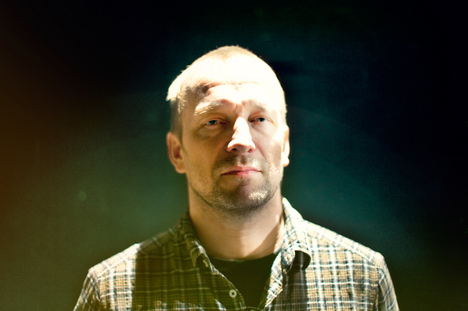 Is `Play Some Fucking Stooges´ your first record together?

It is the first duo vinyl, yes…. and there is another one coming on Smalltown Superjazzz this winter. Some pretty special stuff recorded in Philly some years ago on our Junk Food tour of the US 2009.

What’s the story behind the title?

It was recorded live on the tour, I think up state New York somewhere during the “Junk Food tour”…. checking great junk food out and hitting every record shop in the surroundings! Hard work, ha, ha!!! It is all improvised of course… the only way to do it. It saves time, no rehearsals necessary, so that we can spend more time in the record shops. (Laughs) 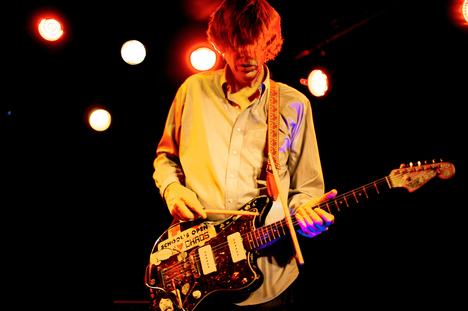 I do understand you toss elements from free jazz, no wave, and rock… What is the purpose under the layer of such frenzy and the noisy compositions?

Purpose? It is just part of the mystery…our story, not history… “mystery,” as Sun Ra one or twice putted it. Or like Derek [Bailey] would say: music is like living, but … better. That is the purpose! The mystery purpose! 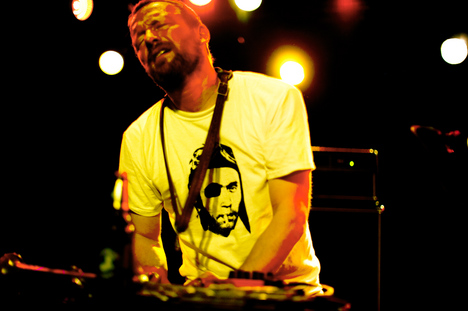 Thurston is well known for his affiliation to acts from the hardcore Reagan’s American scene but also linked with other compositors such as Glenn Branca. The droning, particular guitar tunings and stuff like that. Is this anything you guys previously talked or the work in common was something developed more organically?

It should all happen organically and on stage.. We are busy talking about vinyls the whole day, so not much time left to discuss guitar tunings and such. I work with Thurston because he do what he does and his music comes from his past experiences. As well as my music comes from my past experiences. And that is the MEETING, the interaction, creating the mystery. It is all about trust and respect, and what you do with it on stage. 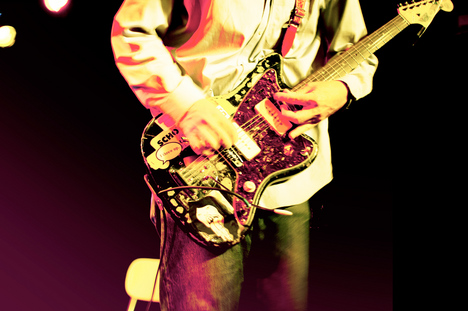 You create a wall of sound of wall of noise. How do you balance “breaks” in the show to keep the atmosphere ongoing?

Space is the most crucial factor in this music; breathing and space; and how you phrase it all. If one concert is a massive wall of noise… it is because it HAS TO BE! Next one is different, of course. But, yes… you are on stage together, sharing the moment, so in that way , there are no “breaks”! But if you just play all the time you’ll probably just end up bore people to death. The mystery lies within the silence…. 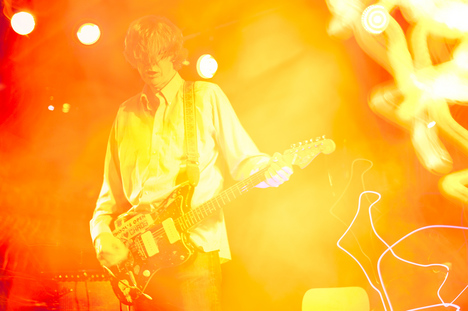 Your saxophone touches strident tones, with lots of treble and intensity. Where all this agony comes from?

Agony? (Laughs) I’m just a huge smile… when I smile, when I eat, when I make love, when I sleep, when I shop vinyls… I’m always a huge smile.

There are no agony…. there is enough agony out there in the world… we don’t need more to be added to that. 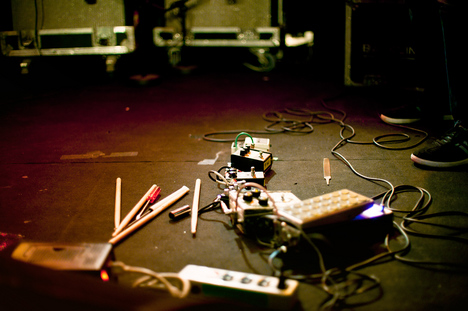 How could you describe the work with Thurston, the synthesis of sound between both?

This is up to other people to describe. That is not my cup of tea… I could never describe my music. It is not good to do… you then put pre conceptual ideas in people’s minds, and that is blocking the energy and the experience of listening freely to the music. It is just music, but if you can listen freely…you can play freely…. and you can think freely… and finally act freely…. That’s IT! That is how it works.

Does the ensemble include some other musicians, bass and drum players?

As Original Silence it does, yes, it is usually a 6tet. It can all change. It is all open… lets see…..

I think you both only use analog pedals, or are there any other digital interfaces or electronic elements?

Not really. We like digital stuff as much as we like CD’s and Mp3´s…(NOT!!!!!) Analogue and vinyl works well for us. We are old fashioned.

Would you feel comfortable labeling this act as sound art?

Sound art is something totally different, to me. So no. That would make me very uncomfortable. But again, I don’t like to label the music that is more up to media and presenters to do.

In this spirit, Thurston has a poetry project called Flowers & Cream Do you think could be room for poetry, sound poetry or spoken word interacting with your show?

All is possible. It all depends WHO is there doing it. It is all about chemistry and sharing…and you can’t share this with assholes and related creatures. You need to try…. make re search…explore… experiment, with the people you trust and respect. All is possible. Like it is with Jim O´ Rourke, everything is possible, always!

You played a few dates in Europe so far. Is there any idea to extend the touring together?

Yes, we did US and Europe and Scandinavia. And we did Japan as well.

We will continue to do it wherever it is needed and wherever there are vinyls to be found!

Yeah, you and Thurston are heavy record collectors. Is anything you guys would like to add to yours but you didn’t have the chance so far?

Yes, Thurston’s collection is good. Mine is good, but the collections can always get better. We are working on that fact, actively, all the time.

“One piece of vinyl per day keeps the doctor away”, as my friend Olof Madsen used to say. Discaholics keeps together. There is shitloads of records I would like to add to my collection. Check my site out and get in touch with me and trade, trade, trade. The most beautiful thing you can do in life, with your clothes on…is trade, trade, trade!!!!!