Masao Okabe’s works are not like such contemporary art we have seen that consist of spectacular installations or overwrought concepts. He creates extremely rich, painstaking work, with surfaces that people can touch with their hands, by rubbing the single stroke of his pencil on paper. This is simple, repetitious, and painstaking work, but in this world full of digitally produced writing and film images, and all kinds of editing software, Okabe’s creations as ways of visually expressing the history of people and towns and memory, the traces of human life, evoke a strong impression in those who view them. 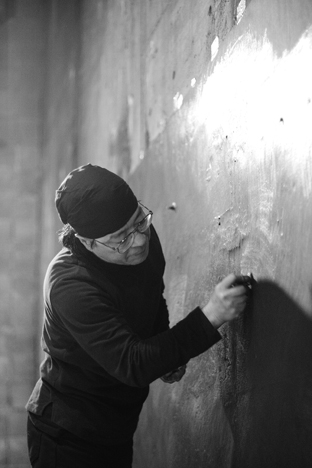 ﻿Although your works are extremely simple they seem to contain layers of meaning, making possible the visible depiction of history and time.

In my technique and materials, and even in the way I think about art, its simplicity may be the reason I can be flexible and prolific and capture the attention of many people: simplicity is always powerful.

Many artists change their style or their process of production. Did you always have a feeling for doing things like you do now?

I didn’t plan it. I just made a decision starting out from a frustration with myself. Maybe the repelled energy kept me doing this. The consciousness of sticking to my belief had to be with simplicity. 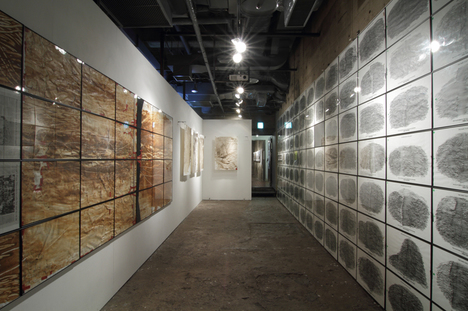 When did that transition take place?

It was in 1977. Till then my thematic project was to record things, by print or drawing. But I noticed that I couldn’t express the era with thus method, so I had to start from the scratch again. I started doing frottage to directly record texture into my canvas. Two years later, my stay in Paris made me aware that history and memory are always lying next to daily life. So not only the texture of the city, but also the stories were rubbed into my frottage. After that I kept on making frottage of various places in various cities.

In this exhibition, there are 3 numbers printed on the frottage.

The frottage are scratchings of an old railway platform in Hiroshima. The numbers printed on each piece, 1894,1945, and 2004 indicate different years: 1894 is the year Japan fought China and also the year that the railway to Hiroshima port was built for military purposes, which helped to export a great number of weapons to Asia. 1945 was the year the nuclear bomb was dropped on Hiroshima; and the end of the war; 2004 was the last year I could make a frottage from this location. The platform was demolished to make way for a new highway. This place, which had been a symbol of Japan’s invasion, became a post-war anti-nuclear symbol, so now awareness of its former significance has almost completely disappeared from people’s minds.

When did you plan this exhibition, “Color is remembering”?

After the earthquake last year, I was struggling. It took a year for me to straighten things out and decide what I could do from an artist’s point of view and express a way of thinking of the future. Hopefully, this exhibit with my pieces I traveled with will let people to think of post-earthquake issues. 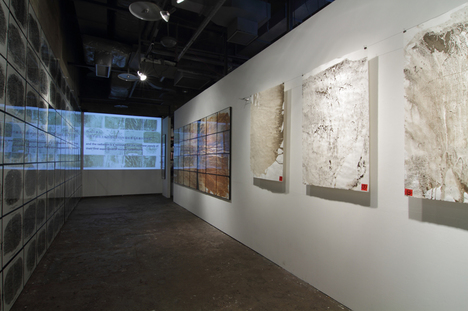 Your art pieces in this exhibit is mainly from after Venice. Is there any piece you made after the earthquake?

There are twelve. They come from six cities that are no further than 600 km from the Fukushima-Sanriku shore. They were made right after the earthquake. Also I brought a piece from Venice that was made for the exhibit and covered it with a black sheet to express post-Fukushima.

Although I feel a similar concept between your artwork made of mud and your frottage art, the way these two are produced is very different. Does that make a difference to you in terms of artistic expression?

When I make frottage, I use paper to be in touch with the place I want to feel, while when I use mud, I put my self and hand directly into the place. Both are connected to the meaning of each art piece, which has an existence in time, memory, and as an actual thing. But maybe this ultimately becomes more concrete in my mud pieces because my actual action is grabbing up the mud for the exhibit. 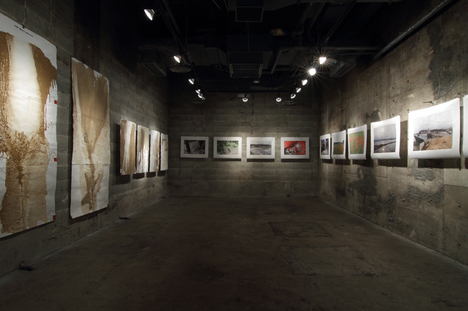 Is there any reason why you have produced more mud art recently?

I had an exhibition in Hiroshima called ‘The memory of mud’, which came out of the process of mud becoming a 1-cm stratum, which takes 100 years and creates the colors of the sand. This was connected to Minato’s exhibit title, ‘The colors remember’. When we think of Fukushima it is always about human problems, but seeing a photo of a beautiful flower hat was taken in a radiated area of Fukushima made me re-think the major theme of this exhibit.

You and Minato, Japanese artist, also the commissioner of the Venice Biennale, have had a long relationship and collaborated on a number of works.

Much of the time, the relationship between the commissioner and artist is a one-time thing, but fortunately with Minato, we have done collaborations in Rome, Tokyo, Venice, Tasmania, Hiroshima, Beirut, China, and here in Sapporo. We have similar points of view, but on the other hand he has what I don’t have, and I sometimes can complement things he lacks. It is like a unit that can expand a theme and make it richer.

How do you decide the locations for producing your artwork?

It depends; sometimes I am invited and sometimes I want to go somewhere. When I went to Beirut it overlapped with images of Fukushima. The Arab Spring, revolutionary wave of demonstrations and protests, was taking over. And it was a great honor to be in Hangzhou for the 40-year anniversary of the establishment of diplomatic relations between Japan and China. Sometimes i t all seems inevitable.

Do you have anything you are working on right now?

There are places in Japan that I feel set world standards of modernity, such as Nemuro, Yubari, Fukushima and the Dojinkai-apartment in Daikanyama, in Tokyo. I would also like to go to Okinawa, Cheju Island in Korea, and Europe.