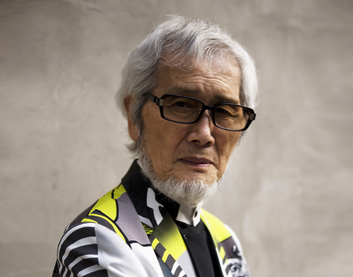 Go Yayanagi was born in Obihiro, Hokkaido in 1933. Since the 1960s he has staged a wide range of individual exhibitions and gained international fame. In the 1970s, he started expanding his activities from 2D to 3D and into fashion, architecture, environmental art and moving images. Today he is as active as he has always been.

SHIFT interviewed Yayanagi on his arrival for the opening of the show. 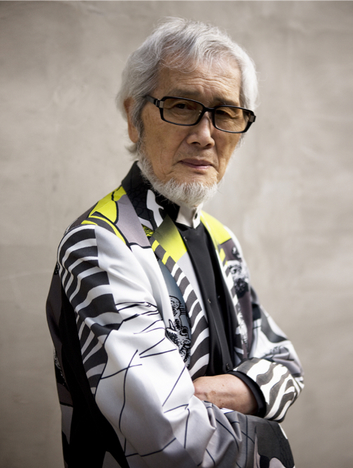 You have achieved international fame due to your active participation in prominent international art fairs such as the Sao Paulo Biennale and Venezia Documenta. Please introduce yourself including your activities. Please also share how you became an “environmental artist”.

I was born in Obihiro, Hokkaido in 1933. My teacher at elementary school was a great painter and encouraged us to go out and draw after school. He often praised my work and I remember that as the starting point for my passion for art. After graduating from Obihiro Agricultural High School, I entered a pharmaceutical college in Tokyo. Shortly after World War II, I went to see Van Gogh’s exhibition at The Tokyo National Museum. It changed my life. Art that brings out people’s emotions is great. Then in 1953 I left college in the middle of my studies and started to make my living by drawing portraits at the US Army base in Yokohama. I learned to paint by myself. I was young, passionate and poor, but never desperate as I was happy doing what I loved to do. Being passionate about art along with that of archaeology, I decided to go to Brazil, where immigration from Japan was most frequent. It took me 45 days to get there by ferry boat. I lived in Sao Paulo until 1959. After that, I traveled to Africa, Singapore, Manila, Hong Kong, then returned to Tokyo.

Between 1965 and 1968, I went to Paris to learn copperplate printmaking. Starting in 1954, I had a series of solo exhibitions both in and outside Japan. After 1966, I started exhibiting at international art fairs such as Miedzynarodowe Biennale Grafiki, Poland and Sao Paulo Art Biennial. As for Hokkaido, I gave a solo exhibition “Distant Cosmology: 40 Years of Go Yayanagi” at Hokkaido Obihiro Museum of Art in 1992. In 1994, I created a glass mosaic “Morion of Life” of Hokkaido Ashoro-cho Heated Pool. Kushiro Airport’s VIP room is decorated with my glass mosaic work of 1996 “Rhythm of Earth and Life”.

Like today’s costume (photo above), which is a collaborative work with Junko Koshino, I use a lot of vivid colors inspired by my world travels to areas such as the Amazonian tropical rainforest. I am sensitive to what’s happening at the moment or the resonance with daily life. Life is itself art. Agriculture is also art. I was a witness to a Brasilia lacking in “greenness” and proposed tree-planting. They took action and 10 years later, when I revisited, the city was covered with green. This is also art.

That’s how I came to proclaim myself an “environmental artist”. People understand nowadays, but 30 years ago when I started using this title, they seemed confused how planting trees and cleaning sea water can be art. 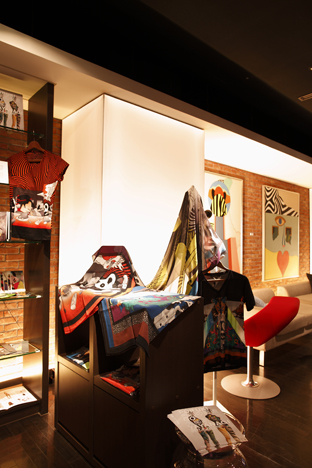 Cross Hotel Sapporo differentiates itself from other hotels by featuring music, fashion, and art in their philosophy. ART X is one of their projects displaying trendy and urban art works in their lobby area. Please tell us why you have decided to have an exhibition at Cross Hotel Sapporo. Also, please explain the meaning of the show title “POP UKI“.

Last year, Junko Koshino and I worked on a collaborative production called “Genre Crossing“, which has been featured in a SHIFT article. Then SHIFT requested this exhibition in Cross Hotel Sapporo through Tokyo Gallery. I was happy to accept it as I was originally from Hokkaido and was especially interested in the hotel as a show venue. 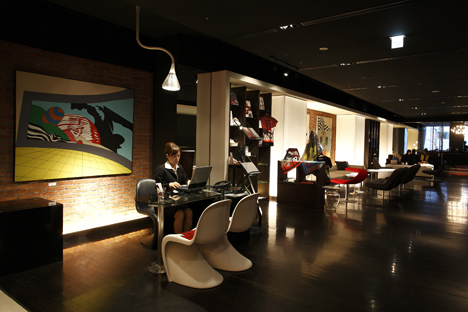 I think an art show at a hotel is an interesting idea, especially now that shows at museums and galleries have become rather uninspiring. In hotels, you can do something you cannot do in museum or galleries. Art should be something that reaches out to the town, to the people. During my stay in Sapporo, I had a chance to visit Sapporo’s underground walkway, which I found very interesting. It’s a place where strangers cross, and new encounters happen. That’s where you should reveal your artwork. Having a fashion show might be interesting, the pedestrians watch the show and become background at the same time. 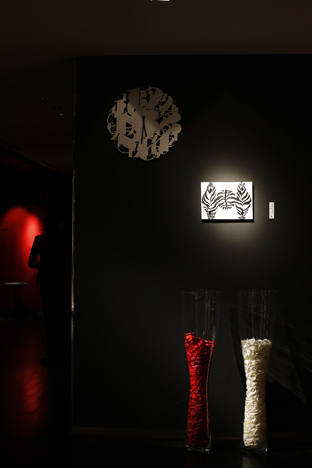 The title “POP UKI” refers to the Japanese Ukiyo-e and pop culture as a witness to the contemporary society. Pop art is said to have been born in the UK then developed in the US. My idea, Japanese Ukiyo-e, is in the tradition of pop art. In this regard, I combined those two words and created a new one. 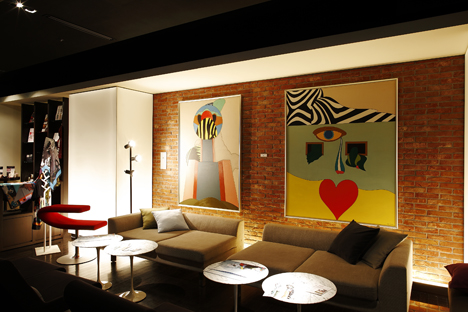 The subtitle of the show can be translated as “Magic of colors”. It is now spring and Japan needs to be cheered up after the quake, so I thought my work at this moment would be a perfect stimulator. Also, when I saw my works displayed at Cross Hotel Sapporo, they match the hotel ambience perfectly, which made me confident to have accepted SHIFT’s offer.

There are 16 oil paintings and silkscreens displayed. Alongside are two mannequins, which are displayed in glass cases to be appreciated from a 360 degree viewing angle. The reason I chose a 3D medium is that I wanted to pursue further than 2D and wanted audiences to discover Yayanagi’s backside as well as in front. 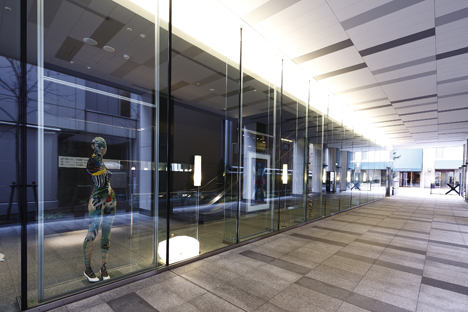 Recently, you have been active in Beijing, China, exhibiting with Mr. Shinjiro Okamoto and Junko Koshino. Please tell us about overseas trends in art. Also please compare your experiences with Japan.

I was at the opening of Tokyo Gallery + BTAP in Beijing. There were about 1,000 people. They didn’t stop asking questions about the works! It’s something that could rarely occur in today’s Japan.

What about in France where I used to live for 3 years? They have firm cultural policy. Visit any museum, and you will see a kids-priority area or educational programs. For example, kids are invited to join in the process of urban planning. Also, in France people often visit museums as a family, which delivers everyday art education. Kids will automatically become grown-ups with art insights and knowledge, which will back up the whole country’s interest for art. I think appreciating art is appreciating people.

Unfortunately back in Japan, the time has not yet come to build this kind of culture in general. There remains plenty of room to improve.

When I accepted this exhibition at the hotel, I was OK for the works to be exposed in an everyday environment, where people could drink and enjoy art at the same time. I was happy to hear that a Cross Hotel patisserie was recommending my works to the guests. That’s the attitude that I want Japanese curators in museums to adopt as much as possible to keep the audience’s interest in art. 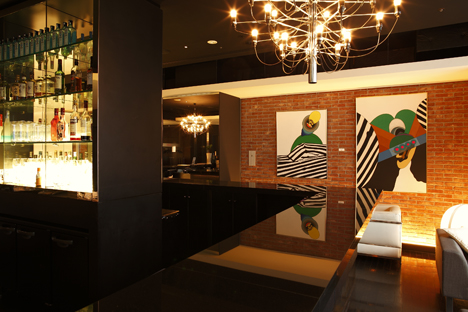 In Sapporo, a Sapporo Biennale is planned to be held in 2014. The pre-biennale projects are now on the go. What do you think about promoting art in city such as Sapporo?

I think biennale is a great opportunity for Sapporo to spread its local characteristics making use of its advantages. Think locally and also act globally. Each of you is messenger. Such a drastic change in mind as well as a new system is required today in preparation for the biennale.

With regards to biennales in general, I think we are coming to a turning point. There are so many biennales everywhere in the world. But they are becoming standardized and all banal. Now is the time for Sapporo to attempt something that has never been done before. And Sapporo has it all. I have travelled around the world and I think that a city with 1.9 million population is a good size to conduct change, in whatever the area may be: political, economic or cultural. Sapporo has a big opportunity in this regard, too. Let’s work on the biennale with not only Sapporo citizens but also with the entire Hokkaido population. How about inviting an advisor from abroad, like you did with Mr. William Clark to the old Sapporo Agricultural College? It’s important to always have an eye from outside since if only the locals are involved, that relationship will be eventually damage the operation of the project.

It would be a nice, too, to have an contemporary art museum in the city center. Like in Paris’s Louvre, naming subway stations after museums is something that can be done only in a relatively new city like Sapporo.

Sapporo also possesses great Ainu culture. How to incorporate it into a contemporary art context can strengthen Sapporo Biennale’s originality, and it should be shown to the world. 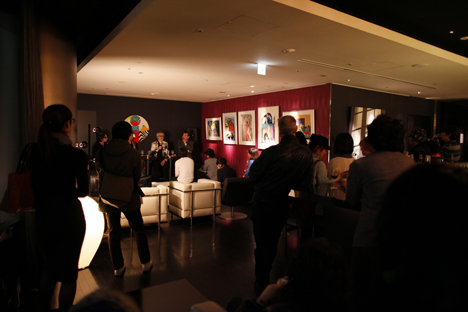 Please give some advice and encouragement to young artists.

I was living in Paris when 1968 when the May revolution occurred. It was such an historic event. I was running out of food, too. The thing about being an artist is how to turn that experience into creation. How to recreate everyday moments into art; that all depends on the respective individual. That’s where your own esprit can be seen. I kept drawing what I wanted to. I wasn’t in search of what the era was seeking, but was aware what was needed. It’s like your 3-times-a-day alimentation and naturally comes to you.

It is also important to converse with yourself. Be honest. For 30 years, I have been waking up at 5am in the morning, practicing Zen and jogging. I do so in order to match two Yayangis residing in my own self and let one dominate the other. Dependency does not create art. Indulge yourself with questions. Recent art students get their money from their parents and never know what it is like to live in poverty. This is not good.

You should also seek farther fields. I think of Obihiro as my home town, but Sao Paulo and Paris are also my homes. You cannot stay inside Japan port and create something new. If the Tsunami hits, you will be blown away. You have to be wide open and ready to go outside. Argue with others. It will become art, too.

Go Yayanagi
Go Yayanagi was born in Obihiro, Hokkaido in 1933. After graduating from Obihiro Agricultural High School in 1951, he traveled to Sao Paulo, Brazil in 1957, where he held a solo exhibition of his work at the city’s Museum of Modern Art. Since then Yayanagi has shown his work actively in various other countries and traveled widely around the world to places like Africa, Singapore, Manila and Hong Kong. In 1965 he moved to Paris and studied copperplate printmaking for 3 years with the master printer S. W. Hayter at his Atelier 17. Yayanagi has presented his work at numerous exhibitions both abroad and in Japan. He was selected to represent Japan at the 11th Sao Paulo International Biennial in 1971. Working across a diverse range of fields including oil painting, printmaking, murals for public buildings and design, Yayanagi is an artist who continues to produce work at an international level.
Since the 1960s he has staged a wide range of individual exhibitions and gained international fame. In the 1970s, he started expanding his activities from 2D to 3D and into fashion, architecture, environmental art and moving images. Today he is as active as he has always been.

Cross Hotel Sapporo
Cross Hotel Sapporo differentiates itself from other hotels by featuring music, fashion, and art in their philosophy. Since its opening in 2007, it gives various events and projects. With its stylish ambience, Cross Hotel Sapporo has become a meeting point of those who are sensitive to creativity.
http://www.crosshotel.com/eng_sapporo/

Machinaka Art Project
Machinaka Art project aims to fill the city with art and to create a friendly environment for citizens to familiarize themselves with art, in cooperation with local galleries, artists and shops.
http://www.machinakaart.com