“Observing light, the joy and pleasure of viewing, that will cause a change of vision.”

Atsuhiro Ito, an OPTRON player and creator of art, crafted an instrument called the “OPTRON,” which outputs noise from the electrical discharge of a fluorescent light, when he was working on fluorescent light art exhibits in the 90’s. He plays the OPTRON not only as a solo act but also with other musicians both in Japan and overseas. Beginning April 2nd, Ito will be participating in a preliminary event of the Sapporo Biennale, the Sapporo Biennale Contemporary Art Exhibition 2011 ‘Approaching Art by Leaving Art Behind – 9 Days the Museum Disappears’ at the Hokkaido Museum of Modern Art. We interviewed Ito about his activities. 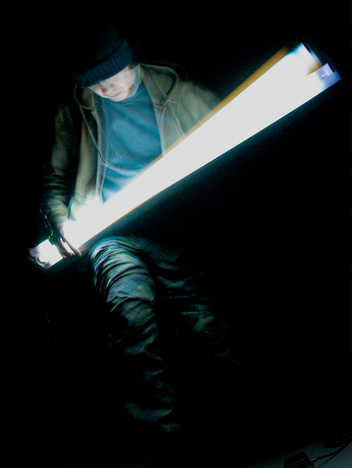 Please introduce yourself including your previous activities.

Atsuhiro Ito. I have been making installations using fluorescent lights since the 90’s. In 1998, I created an “instrument” that outputs the noise from the electrical discharge of a fluorescent light and named it the OPTRON. Then, I started to do performances with it at exhibits. After 2000, I started to get invited to exhibits and music festivals both inside and outside of Japan. Along with creating and introducing art and having solo performances, I also play in some bands: the explosion optical noise core band ‘Optrum’, a free Jazz trio ‘Kazuo Imai Trio’ and techno noise unit ‘ULTRA FUNCTOR.’

Why did you want to be an artist? Could you tell us the process of becoming an artist?

This is a problem of wording, but I have never been wanted to become an “artist.” (To me, it is hard to understand what people in this country want to achieve by becoming artists. It almost seems like the word “artist” itself can impress people. I know that it is a very convenient word to explain what people do though.)

In my case, rather than trying to contribute to the world, I’m more interested in creating things with my own hands and playing and listening to sounds. Since I have never stopped doing this, people started to think that this person might be an “artist” and refer to me as such. I have never really added any meaning or social contributions to my art and performances, and will continue to create and perform just because the visual and audible joy and stimulation keep me excited. By the way, my social positions are ‘an art creator and an OPTRON player.’

What types of things do you do as an OPTRON player?

OPTRON is an instrument that outputs both sound and light from a fluorescent light at the same time. I originally created it as an extension of an installation around 1998. (I basically didn’t attempt to create a musical instrument at the beginning). The theory is very simple. I pick up the noise from an electrical discharge that happens when a normal household fluorescent light gets turned on and off and output the noise. With an effecter pedal for guitar, I can create many variations of sounds. Moreover, I can also create massive flickers (and the noise comes along with the flickers) by controlling voltage modulation by hand while the florescent light is on.

Since the 2000’s, I have developed OPTRONs of different shapes, some more for decoration, some in more of a guitar style mainly for live performances. As a result, several different kinds of OPTRONs were created. Basically, any types of OPTRON must not be good for your eyes and ears. I have been playing OPTRON with musicians from different genres of music.

What are you planning on submitting to the Sapporo Pre-Biennale Contemporary Art Exhibition at the Hokkaido Museum of Modern Art?

I’m still brainstorming, but I think it’ll mainly be some equipment set to automatically flicker and play music made out of florescent lights and ordinary electrical products. 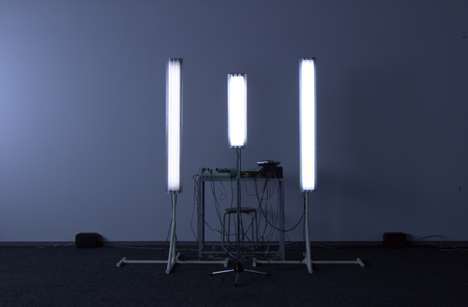 When did you start being interested in florescent lights and such things? Are there any special reasons?

I don’t really know why but I knew that I liked the light from florescent lights better than that of light bulbs since childhood. Around 1993, I started to consider using florescent lights as a material for my art. First, I created a light box style panel piece that illuminated 2D pieces from inside. Then, little by little, I shifted toward creating pieces that show florescent lights and other equipment from inside of my art pieces. Along with that, I stopped using structural parts such as outside frames, and started creating installations with only florescent lights as materials. Moreover, just because of the influence of my hobby, I decided to include the elements of sound and music.

You use a unique material, florescent lights, for your art. Do you have any basic ideas that you use to create a piece?

I don’t know if I can call it as a basic idea, but I’m always interested in observing light, the joy and pleasure of viewing (strong stimulation sometimes), and the change of vision caused by looking. Also, I try to avoid artificial and simple ideas, such as “mystery”.

What are your inspirations for your art pieces?

Special effects in movies and TV shows where a character transforms into a superhero that I watched when I was a kid. Music (recently, especially, dubstep and techno). Various works of literature and movies, comics, the habits of living things, lots of machines and their movements, festivals from various countries and regions, etc.

I start off with sketching and drawing. In the case of an installation, the use of space and the process of creation vary depending on the environment of an exhibition. Therefore, there is no set process. It’s always case-by-case. 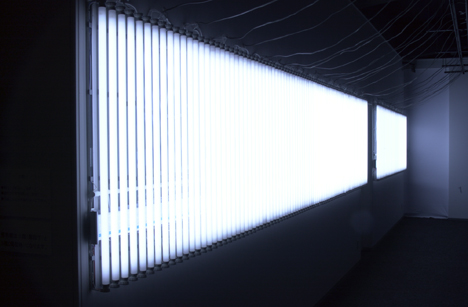 Of course, I have obtained so much from my own experiences. But I won’t be able to write it down here. (Below is the recognition that resulted from some of my experiences).

Although I noticed some differences between audiences’ reactions to my art in Japan and overseas, I would rather say that the reason is linked to each individual’s perspective toward art and music, and not their nationalities.

Europe and America, where I’ve done exhibits and performances outside of Japan, have a general understanding of “modern art” and “music” (from Classical and Pop to Avant-garde) or recognize what they are. Because of this understanding, I feel like the people who I met did not show much difference in reactions towards my art and performances. (I don’t necessarily think it’s a good thing). If I could step more into the domestic areas of various countries and people’s daily life styles in such areas than I could see during a short trip, I believe that I could have a better understanding of how different nationalities and regions affect the way that people recognize art.

If you were not an artist, what would you be instead?

I don’t even know. Maybe a criminal or something. I bet that I’d be making a little better money than my current situation.

Do you have any themes that you’d like to explore in your art in the future?

I do. But nothing is solid yet. When it comes to music, I’m interested in rhythm and groove.

Do you have any shows coming up?

As far as my main schedule for 2011, I’m planning on doing a few live performances a month in Japan, and I also have a plan for a solo exhibit and performance in Tokyo in July. As far as plans for outside of Japan go, I’m confirmed to play some shows in the U.S. (Los Angeles and New York) in May, and it’s still in the works but I’ll most likely be going to have some pieces and do a performance in Denmark at the end of September.