Activists worldwide have been connecting online to bring forth political change, and now the contemporary art market has tested the power of the Internet as well. Purchasing artworks without actually viewing a piece is not uncommon these days. However, transactions of this scale are something else; from January 22nd to the 30th, for one week, “VIP ART FAIR,” the first completely online art fair, was held. 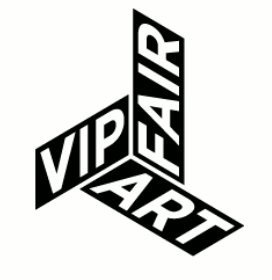 What was more remarkable than the virtual aspect of this art fair was the galleries involved: the Gagosian Gallery, White Cube, Blum & Poe, David Zwirner, Yvon Lambert, Hauser & Wirth, Galerie Emmanuel Perrotin, Sadie Coles HQ, Xavier Hufkens, Marian Goodman Gallery, and others. The roster was full of participating galleries of “Art Basel,” which is considered the pinnacle of contemporary art fairs. From Japan, Gallery Koyanagi, Mizuma Art Gallery, Ota Fine Arts, and SCAI THE BATHHOUSE took part. From 30 countries, a total of 139 galleries joined, and 2,000 artists showed 7,500 artworks. With such outstanding galleries participating, the list of artists were of an exceptional class as well, including Basquiat, Francis Bacon, Jackson Pollock, Damien Hirst, Takashi Murakami, and others. The artist list was so attractive that the virtual nature of the art fair was probably dissatisfactory for those who wanted to see the actual works. 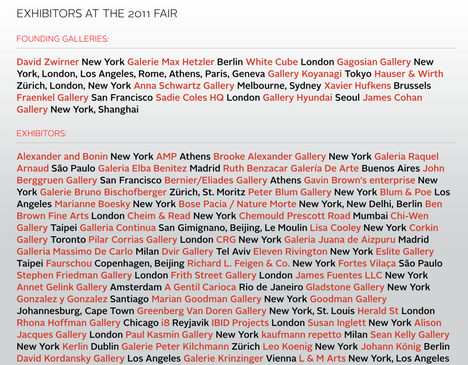 Similar to a “real” art fair, participating galleries paid a booth fee for online space, and uploaded photographs of their artwork. With a zoom function that enlarged the images, which offered detailed views, each piece’s caption and price setting were displayed. 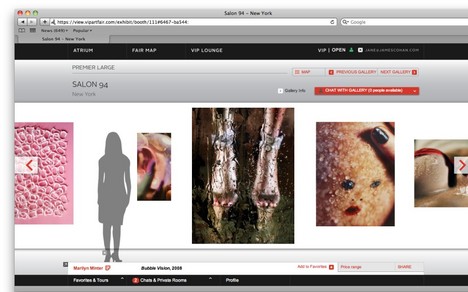 While sitting in front of their computer screens, visitors to the site could observe pieces from galleries worldwide by simply scrolling and clicking. If explanations were necessary, or if visitors wished to enter negotiations, gallerists all over the globe were on standby via chat or Skype.

Once the fair commenced, however, servers went down several times, the VIP chat space that came with a100 dollar access fee did not work, and the organizers ultimately announced that they would return the fee.

The lack of viable negotiations that galleries received was also a disappointing aspect of the fair. While the site kept count of the number of visitors each art piece received, such numbers merely indicated popularity and were close to meaningless for gallerists if they did not lead to sales and new clientele. At a non-virtual “real” art fair, experienced gallerists can approach collectors, but at VIP ART FAIR, unless clients directly contacted the galleries through Skype or chats, gallerists could not initiate any action. Some voiced that the fair was no different than gallery websites.

VIP ART FAIR seems to bode a future of online bidding for art collectors who are used to flying around the globe from fairs to biennales. However, whether or not this particular virtual, yet real, transaction space will return next year remains uncertain.