The territory of the everyday.

Dominic Wilcox is a London-based artist. His witty idea can be fully seen on his new work “Pre-Handshake Handshake Device”, which was exhibited at the group exhibition Uncomfortable Conversations held during New York Design Week in May. His humorous creation is originated from “the territory of the everyday”. SHIFT will introduce works and ideas created by Dominic. 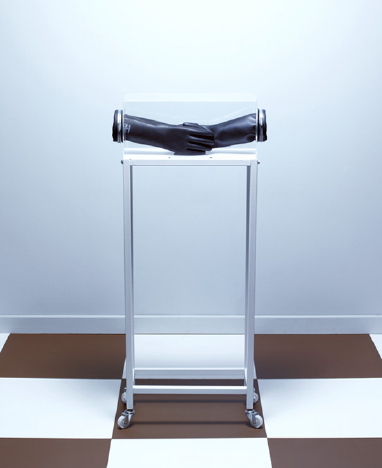 How did you start your career as an artist?

When I was nineteen I was taught by a contemporary artist called Charlie Holmes, he opened my mind to the idea of being creative through ideas. Before that, I had a traditional understanding of art as paintings of still life and landscapes. Charlie showed me books from various artists and took us to interesting galleries which opened a door in my mind to my future creative work.

Could you introduce some of your works? 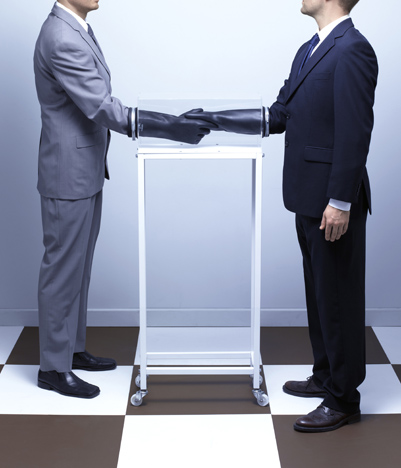 Pre-Handshake Handshake Device
This is a device to shake hands with someone you have fallen out with, without actually touching skin. It is a pre-cursor to the full handshake and hopefully will be a first step towards reconciliation. 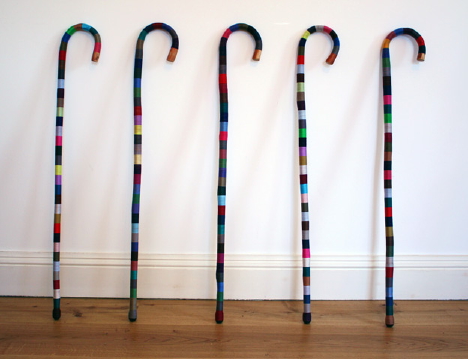 By a thread
I was interested in wrapping objects and giving them a second skin. I bought a large selection of multi-coloured cotton thread reels and spent fifteen hours wrapping a wooden walking cane. 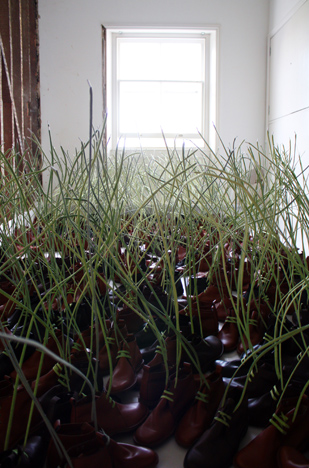 Field
A theme in my work is to give life to inanimate objects. I decided to make a field by using many shoes and making the shoe laces rise into the air as though they are growing towards a light. 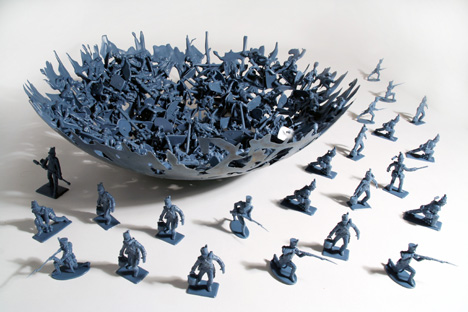 War Bowl
War bowl is a bowl made from soldiers from particular battles. For example the blue Battle of Waterloo, half French and half British, and the white English Civil War.

Your works are very unique in the use of materials and choice/mix of ideas. How did you come up ideas?

Sometimes I will be walking along the street and see something that makes me think of an idea, or I may be talking to friends and an idea comes to me. One of the best ways to find ideas is through experimenting with materials, sometimes surprises happen. Most of the time I just have to sit and think, unfortunately there is no way around finding ideas other than hard mental work.

Where do your inspiration sources come from?

I’m the same as everybody else in that I’m influenced by everything I see and experience. I’m always attracted to things I haven’t seen before and these things stay in my mind the most. Sometimes ideas come when I am in a seemingly uninteresting environment which makes my imagination try to create something to entertain me. 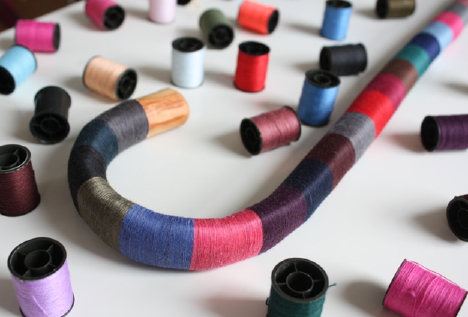 Do you have any specific common philosophy or theme for your art pieces? What would you like to express in your work the most?

In some of my work I make observations on people and behavior and express them through objects. I use the theme of everyday objects as a platform from which to be imaginative from. Normality is something we all understand and live with so I try to use this by twisting it into something surprising. In other work I will try to find something interesting in simple raw materials or manufacturing techniques. Mixing, melting, stretching or any other physical manipulation I can think of to try and reveal a hidden quality. I will be doing a project based on experimentation in September during London’s design week.
Generally I start from an idea then decide which medium is best to express the idea in. It could be a drawing or an object or even a story. 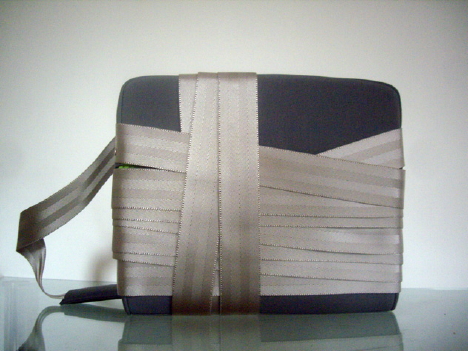 Besides art works, do you work for commercial projects? If so, any example past projects?

I do sometimes get approached to create art or design projects, I am lucky in that they usually just give me a theme or venue and let me do my own thing. I sometimes enjoy working to a given brief as I see it as a challenge. Recently I was asked to customise a bag by a German brand called Auf Blank. I liked the shoulder strap on the original bag so decided to wrap the whole bag with it. I was previously commissioned by Nike to create an artwork on the theme of football. I made a series of objects from thousands of plastic footballers.

Who is your favorite artist, designers, and musicians?

How do you spend your spare time?

I try to teach myself the guitar but have not progressed beyond two tunes. Every time I play them I will always make one mistake at some point. I play them over and over but have never achieved a perfect attempt.

How would you like to explore in the future?