A New York based sculptor specializing in using wood and bronze, Bill Wolff will be participating the international art fair ART SHANGHAI 2010, held in Shanghai in May 2010. He once studied at Tokyo University of the Arts and exhibited his new work “Flock” at gallery COEXIST. The exhibit was a metaphor about our constant existence as a flock of people who originally as individuals could choose their own life freely while in the diverse community rapidly formed a developed net society. Bill Wolff revealed his new work “Flock” and sculpture. 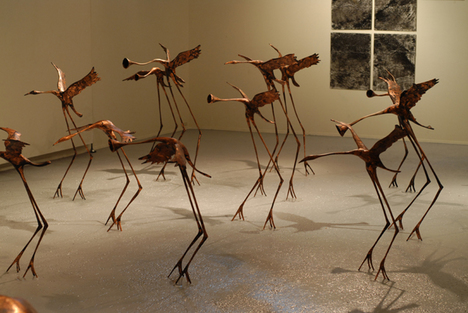 I heard there was a folklore story behind the background in making Flock. Could you discuss it?

The 12th century poem “The Conference of the Birds” tells the story of 30 birds that travel to seek the Simurgh, a mystical and god-like creature in Persian folklore. After a long journey, when the 30 birds finally arrive at the land of the Simurgh, they discover that the only thing that they see is their own reflection. Thus, the Simurgh is at once a single creature and 30 individual creatures. I thought that this story served as a good metaphor for the relationship between group and individual. 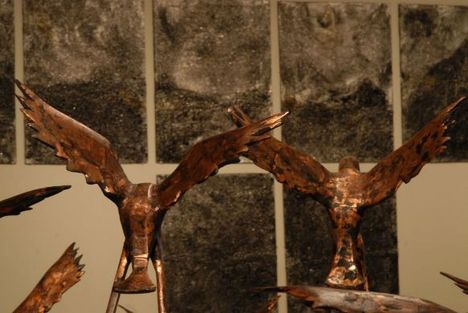 Could you tell us about the 2D work displayed on the wall?

I thought that it was important to expand the gallery by including the walls. The 2D work on the walls is intended to be a context for the 30 birds: mountains and valleys in the distance. Like a window to some fantasy world. I used to have a studio in Nezu, and would often see nihonga supply stores and very traditional sumi paintings frequently. Because I was using materials that were the same or very similar to nihonga, I let the influence of the very traditional Japanese and Chinese work to show through my works. 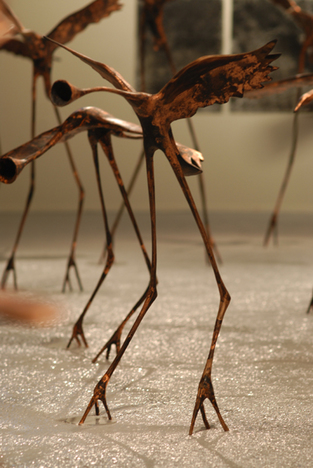 Could you elaborate more about the materials and forms of Flock?

Flock is made of basswood, which is lightweight and a commonly used carving wood in America. It is similar to ginko．The legs are made from oak, which is very strong. The pieces were assembled in sections, with the same joints that one would use to build furniture. This was necessary because most of the mass is suspended in the air on very thin legs, in order to get a convincing sense of motion. Once the forms were complete, they were carved, then charred and sanded to soften the edges and create a mix of dark and light areas. Then large areas were covered with copper leaf which was then treated with chemicals to change the color. This way, the surface color is a mix of light wood, copper, golden browns and black. I wanted the effect to be like late afternoon sunlight reflecting on the wings of a flock of birds. 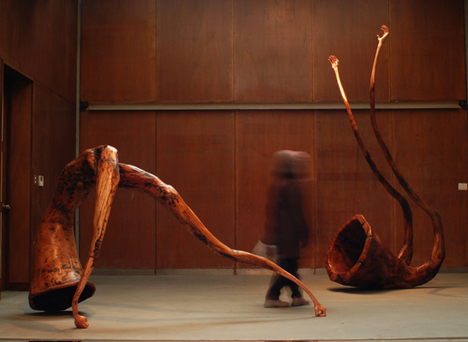 What do you think about the movement made by sculptural pieces and their balance?

I am always interested in creating a strong sense of movement in any piece of sculpture. I am also attracted to objects which have a delicate sense of balance. As often as possible I like to have more (or bigger) sculpture in any space than the viewer. When someone enters a gallery with a few small objects, it is easy to think of the sculpture as small, or inferior. When someone enters a gallery with many pieces of sculpture, or sculpture that is larger than themselves it changes the relationship. They have to think about themselves in relationship to the sculpture. That was the goal this time: to create a sense of movement that included the viewer in the gallery. 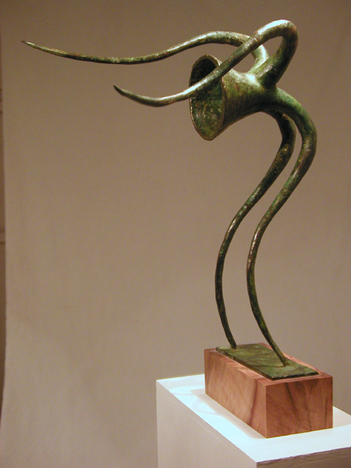 Please tell us about your idea to use mouth-like shape characterized in a series of your past works.

I have used a hornlike shape as a symbol for a mouth or head for a long time. I like the idea that it looks as though it can speak, or broadcast sound. It looks as though it can eat or suck up everything around it. It also looks like it can hear. It is a very natural shape to make from a round piece of wood. I like that it makes people ask questions. When I first started using it, I was thinking of it as a symbol for “a way of life based on consumption” (too much consumption) but more and more it is simply an all-purpose sense organ. It is a slightly abstracted head which makes people wonder about what it is, what it is doing. I find that sculpture or art that is completely representational (that looks exactly like a crane, for example) can be beautiful, but I find it a lot less interesting than work that forces the viewer to imagine what it is, what it can be doing. 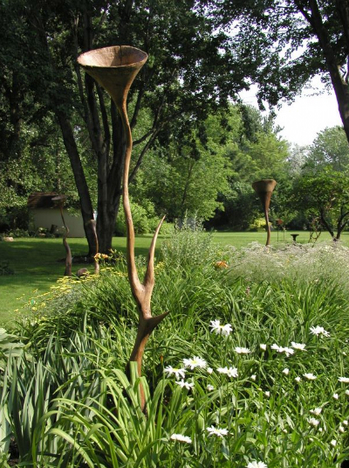 You often install your sculptural pieces outside. What are you aware of the relationship between a piece of art and place to be installed?

Unless sculpture is displayed on a white pedestal, it always refers to the space that it is in. I like a piece of art to challenge the viewer, and so it is important to me that the art and viewer are in the same space (with the art not on a white pedestal). Whenever there is a chance to display work in a truly unique and interesting environment, I try to do so. The more challenging the location the better, and there is no place more challenging to show work than outdoors in nature. I find that exhibiting or making works for outside is a very good working arrangement. It feels like I am cooperating with nature or the exhibition space. When I make work for a white box gallery, it is more like working alone.

Lastly, what does sculpture mean for you?

Sculpture is as real as the people looking at it. Sculpture for me is an opportunity to present a complex idea or a single moment of time in such a way that it can be examined or viewed at leisure. It is a way to continue thousands of years of craftsmanship and object making, and it is a terrific way to communicate with people across all kinds of boundaries.

Bill Wolff
A sculptor questioning his audience by projecting problems between individuals and modern society onto his work, exploring the relationship between features of his work such as gesture, form, kinetic sense and place to be exhibited.
http://billwolff.blogspot.com