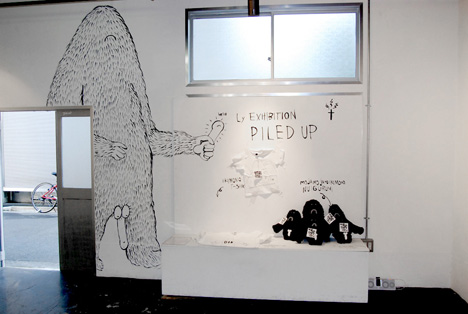 Ordinary people have little memory of their dreams at night. Even when they see something interesting in their dream, it’s usually only a fragmentary memory and subsequently a small conversation topic. But, Ly is different; she always sees a dream, remembers it, musticates it, and finally outputs it in to different expressions. She is, in other words, a professional dreamer. In PILED UP, her first exhibition in a year, she showed us the world like the one you may see when you cut open her head. 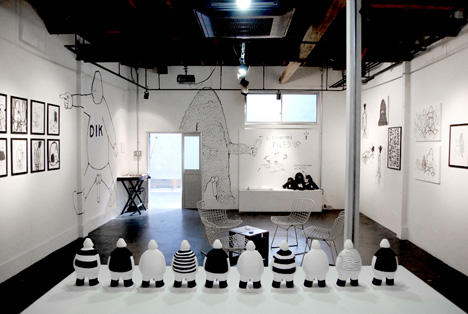 Once an interview of SHIFT kicked off with a picture in which she put out her tongue which she had graphically painted with a magic marker. That was impactful in every sense—from the truth that a woman paints dicks, and the monochrome graphical touch of her works, to the nature of her own. Since the interview about a year ago, Ly has constantly been working in performance art such as wall paintings and live paintings. In this time, presenting a full-length wall painting, stereoscopic figures, and typographical works, she honestly expressed the world of her dreams unable to put into only a small canvas. 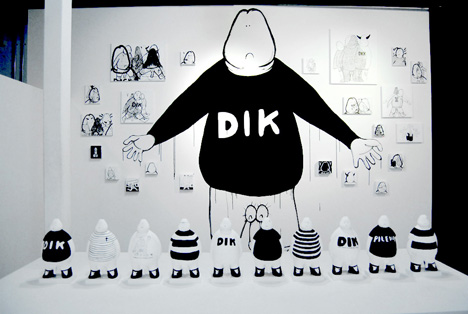 DIK, the main character of this exhibition, is one of the motifs developed in her dreams. At one time, Freud claimed that it is in a dream that man’s deep psyche exists, and on analyzing, at depth, tried to uncover hidden factors in his mind. In Freud’s dream analysis, the idea of sex is crucially important; a dick is often symbolized and it is said that something long or sharp indicates a dick. In Ly’s dream, DIK is just the thing. 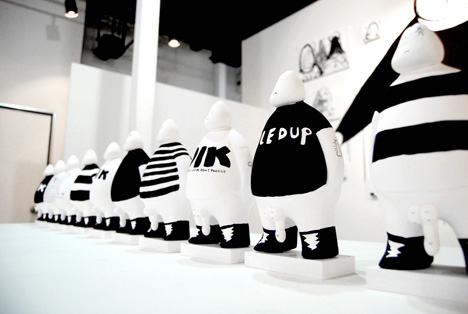 To see such a dream could be generally concluded that he/she carries some sexual problems, but her painting has much difference from the instinctive things of humanーsomething much more warm, interesting, downy, cute and a bit cool. Mixed with graphical and artistic factors, a piece of work comes into existence. Wondering what her deep psyche is, we are led to the deeper parts of her world. 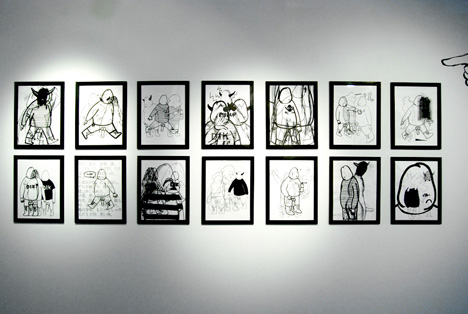 Some works are created in the form of piling up a few motifs, and they are also the images in her dreams. She interprets some characters in order to keep in a piece, and takes up her pen. The pen is for writing as well as for painting. As long as she can directly put one source of a dream into an expression, it may not matter whether it is painting or writing.

Dreams of others are never visible. But in Ly’s paintings, the dreams of a different human from you are definitely expressed.