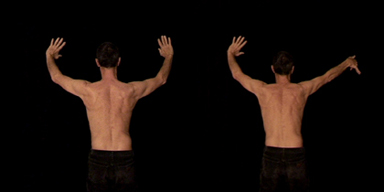 Do you have anything you are interested in except dance and farming?

Could you let me know some names of you are interested in?

It is life itself. For instance, there is a lot of improvisation in sports. In the case of soccer, it is necessary to improvise within a rule because many adults follow the rule. Improvisation makes your body move, not just think in your head.
Today, I heard one of the better definitions of improvisation from Robart Frith, a jazz musician on the radio. He said that improvisation is the assumption of innocence in the context of experience.
I thought that it was a very interesting definition…sort of explains why it is so interesting. Okay, you have context, which is the conservative element; such as memories and experiences, but the assumption of innocence is childhood. I’ve been dancing for fifty years, and I’m still interested in moving on progressively.

How much do you improvise on stage?

It’s not how much I improvise, but in what way I improvise.
So, since the 1970’s I’ve been testing my idea in my dance almost scientifically. I could say that I am a researcher. For instance, for C.I. I am researching weight and reflection. I was dancing with various styles, like collaborations with other dancers, musicians, and solo dance. With one body, one space, one night and little music, I have been trying what I can do, as everything only has one chance.
When it comes to time, you might think of the concept of time. There are many philosophies about time, but it is hard to be practical with the idea that you only are alive in this moment; we all are simply projecting the future and carrying the past. Right there in the middle exists right now, which needs exercise too.

Are there any reasons you set one hour for taking a nap in the workshop?

My workshop’s exercise deals with coordination, which is strange to the body, as it has nothing to do with ordinal movement. Naps are necessary because the part of brain that actually does the movement, which is unconsciousness, can learn the movement. Get consciousness out of the way by putting it to sleep.

Steve Paxton
Dancer / Choreographer. Born 1939 in Phoenix, Arizona, he has researched the fiction of cultured dance and the ‘truth’ of improvisation for 40 years. He lives on a farm, and he has received grants from Change, Inc., the Foundation for Performance Arts, John D. Rockefeller Fund, and a Guggenheim Fellowship. He has been awarded two NY Bessie Awards, and is a contributing editor to “Contact Quarterly” dance journal. He was one of the founders of the Judson Dance Theater, Grand Union, Contact Improvisation, Touchdown Dance for the visually disabled (UK), and began his career studying modern dance techniques, ballet, Aikido, Tai Chi Chuan, and Vipassana meditation. He performed with the Merce Cunningham Dance Co. from 1961-65. He lectures, performs, choreographs and teaches primarily in the USA and Europe. Recently he collaborated Mikhail Baryshnikov, Trisha Brown, Lisa Nelson and etc. In 2008 he published a DVD-ROM “Material for the Spine” and book with Contredanse in Brussels.