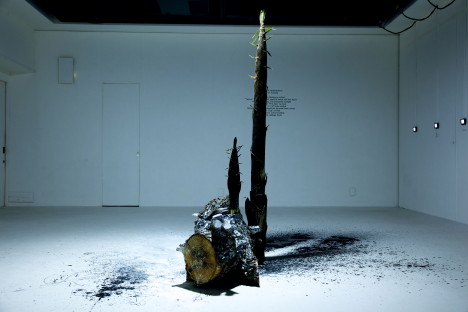 Which plants did you use for the work?

Pine trees and bamboo shoots. As for bamboo shoots, I got my inspiration from it as I visited the hill where I used to hang around when I was a kid. At the very beginning, I had an idea to use wild flowers. But once I returned there and looked into my past, I realized there was no such image of using wild flowers. Using the bamboo I think I was able to express as true to my memory as possible.

Besides the installation, I heard that you performed live in front of the exhibited work.

Yes. I played as I got inspiration from the installation. My buddy Shiinoki and I played guitar and my brother played the drums. We did it improvisational style. 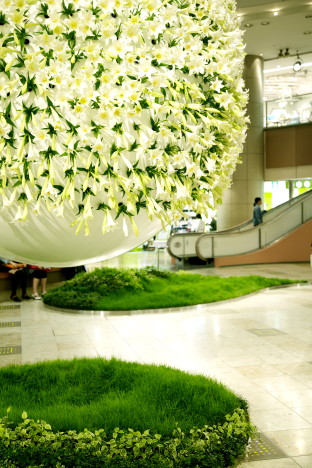 In your local area, you also did an installation work White Emotion in Tenjin IMS from March 18th for a month.

I worked on it under the theme of drop. As its 20th anniversary, I created a drop hanging from the ceiling and from it there stretched out onto the vast green. I have a special feeling for the place as I used to hang around there when I was young. The place was a kind of starting post. 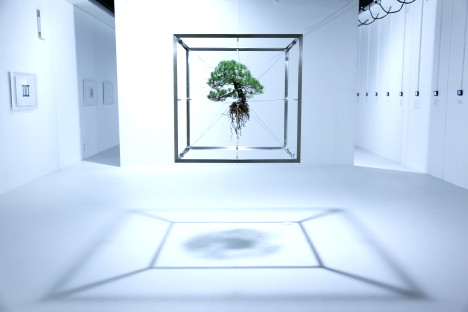 One of your features is using pine trees for your works including the Shiki series and ROLLING.

Yes. I just like pine trees. I can feel noise and sound from the tree. I prefer such kind of plants. 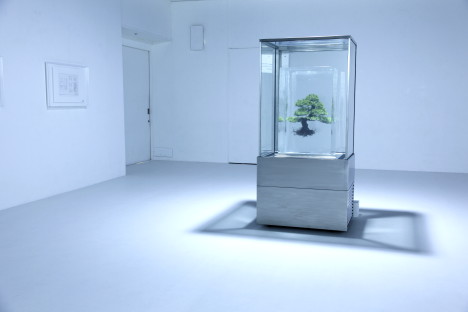 As for the Shiki series, one of the concepts is to express the existence of itself that is something more than that of the wild pine tree, pulling all the power it has.
As for ROLLING, I got an image of the pine tree rolling, which I saw at the site of Imperial Palace when it was raining hard. It seemed as if the tree was rolling to be dissolved in rain. But I rolled it because I just wanted to do it.