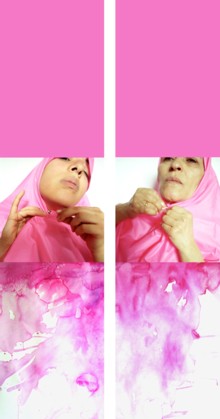 Another piece made us smile was ‘Weapons of Mass Discussion’ by Arwa Abouon. This humorous piece presents two chatty (could be aggressive) looking women as ‘weapons’, getting ready for discussion. 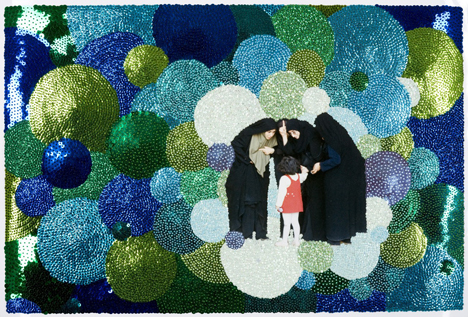 Next one, from Galerie Kashya Hildebrand, Zurich, is a cute piece called ‘Mosque’.

In the Middle East, most countries including the UAE are Muslim states. There is a very strict censorship even on art works in case of nudity or insult for Islam.

This largest Middle Eastern art fair is not an exception. There was some controversy over one installation, which depicted a page from Holy Koran with weaponry and horses. The management of gallery decided to take this piece off from exhibition in the middle of the fair, local media reported.

Another one was the art piece by Lebanese Australian artist George Phillip titled ‘Insh’Allah Surfboard’. The word ‘Insh’Allah’ (meaning ‘As God wills’ in Arabic) is often considered a holy word, but in this case was painted on the surfboard. This was regarded as controversial, because surfboards are to be stamped on. But Phillip cleared his point that the surfboards are not for actual use, so it will neither be placed on the ground nor stamped on. His piece attracted many visitors after. 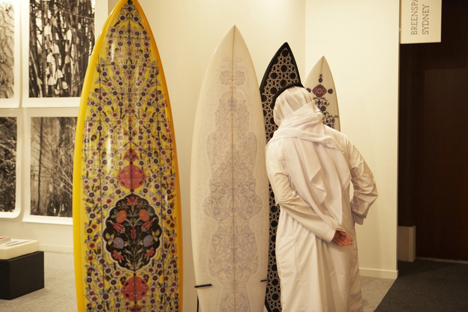 Dubai as a trading hub is showing a rapid growth. In this business-oriented city, there are many different kind of exhibitions all through the year. For those in art industry, this art fair is also a big business opportunity. Last year’s Art Dubai made record sales in the auction stage. The price of this year’s art pieces varied from 50 thousand yen to one billion yen. But the economic crisis was bound to have some effect on Dubai’s art business. Some local artists had to bear the devaluation of their artworks as low as one tenth of the value in Dubai’s boom time, according to Time Out Dubai. One of the exhibitors of Art Dubai 2009, L&M Arts told local newspaper Khaleej Times:“We are doing as well as we thought we would only because our expectations for this year are not as high. The global economy is down and so is the stock market but people are still buying art pieces.” Michael Schultz Gallery with Ma Jun’s ‘Car’ sold their art pieces for 9.5 million yen, 6.3 million yen, three million yen. There were also some galleries which sold out all their pieces at the fair.

Art Dubai’s co-founder and director, John Martin said: “Dubai is turning into a meeting point for artists.” He said that what makes Dubai a fast-rising cultural hub is its receptive attitude towards new ideas.

There is a rumour that Dubai is directly hit by the crisis and the bubble has burst. This massive art event showed that there is still lot of vitality in this city. Art Dubai 2009 closed its curtain with loud applause from visitors came from all over the world. It is interesting to see how Art Dubai develops in years to come, but also you might as well explore your hidden potential to win Abraaj Capital Art Prize for a year from now.