Exactly one year after the beautiful Palazzo Litta in Milan has been used as the location for the important retrospective Altri fiori e altre domande (“Other flowers and other questions”) of the conjunct work of Peter Fischli and David Weiss, the duo of Swiss artist come back to town to show a video based on footage shot in the pavilions and the halls of the baroque palace. Also this follow up has been organised and promoted by the Fondazione Nicola Trussardi and his the continuation of a series of videos based on two fictional characters, a Rat and a Bear, impersonated by the artists themselves in costumes. 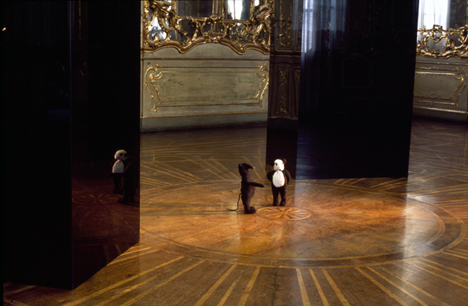 Parts of a Film with a Rat and a Bear arrive after 25 years after the last episode of the series – composed by The Last Resistance (1981) and The Right Way (1983) and it’s composed by three looped sequences projected on different screens simultaneously: on the first one the two animals, are portrayed as younger puppies, who play around their bigger selves contained in a reliquary, until the adult rat and bear regain life, escape their prisons and start acting as parents to their smaller selves, delivering teaches and threatening punishments; the second screen shows the two creatures walking in the halls of the Palazzo and playing children games using the decorations on the floor as an imaginary track before falling asleep. 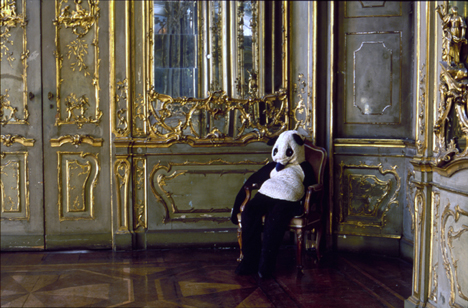 The third looped sequence shows the Rat and the Bear suspended in the air, in a room while the camera turns around their figure continuously in a sort of sci-fi outer space sequence. The press release states that the impersonation is a means for the artists to explore “the mysterious secrets and simple commonplace of our daily lives” and, these film portray, fascinatingly, something that is exactly in between a surreal joke and the translation of an allegoric ritual.