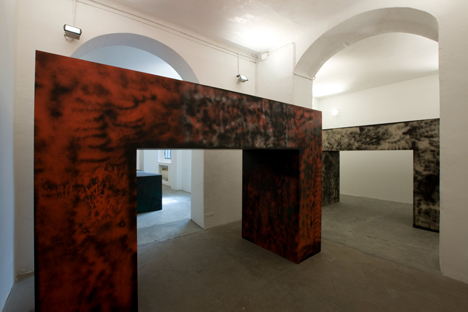 The first time I had the chance to see Sterling Ruby’s work was two years ago at Emi Fontana’s gallery historically located at the address Via Bligly 42 in Milano: the show was composed of black and white pictures based on the torsos of female body builders and candles as well as totemic, dark and vaguely anthropomorphic, sculptures recalling the dripping of the lit candles. “Recombines” – that was the name of the 2006 exhibition – suggested an interest in both the imposing and the elusive. 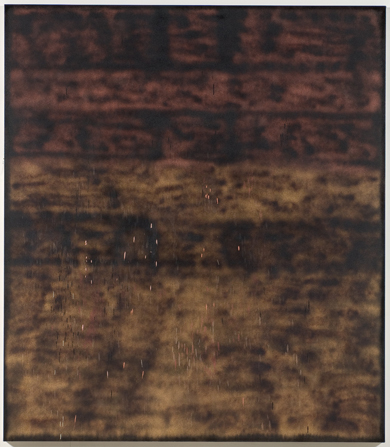 The same can be said of “Zen Ripper”: the gallery is invaded with big, geometric sculptures made of formica sprayed with colourful textures and, now and then, cut with symbols and phrases as the ones that can be found on trees or park benches made by teenagers who want to leave a mark of their presence. There is a sharp contrast between the sculptures which seem to come from the minimalist tradition of neat and geometric shapes and the almost camouflage-like painting that disorients the viewer visiting the labyrinthic installation. 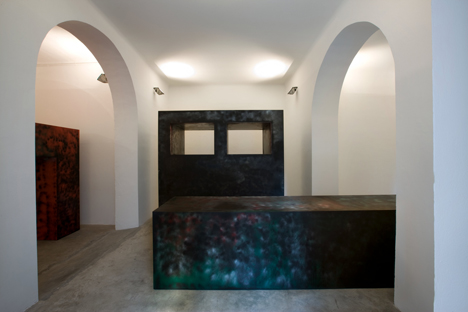 “Zen Ripper” opened in parallel with another exhibition of the Los Angeles based artist in the area: “Grid Ripper” held at Bergamo Museum of Contemporary art GAMEC which is only an hour or so away from Milano and it’s definitely worth the visit.