Minutes after the Powell Opera, it was time to take a look at the ‘Eat The Wall’ participatory work, which was already on its way to being completed. Imagine a city made entirely of food – towers made of ice cream cones, roads of liquorice, whole suburbs held together by slices of bread – scaled to a manageable size, of course, and then devoured by its creators. This is artists Ali&Cia’s ongoing ‘Eat The City’ project, and for the Berlin version, people were asked to bring in a brick of food to build the wall, and then slowly devour it to ‘enjoy the collective catharsis… break down barriers, bridge differences, and forge relationships’.

I’d brought along my two bricks of food – one plastic container containing a couple of garishly coloured ‘dunkin donuts’, and another with the more ‘healthy’ option of organic banana chips. 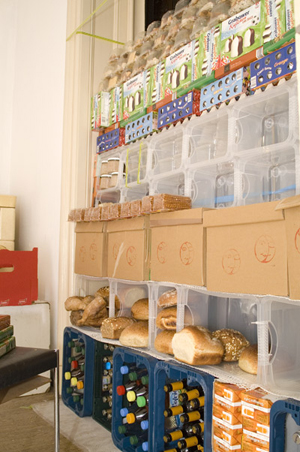 A range of foods for the discerning and the indiscriminate palette were on offer, with everything from Italian sausage to marshmallow sweets and some rather gross-looking German liver pate. And there was a wide selection of people there too – young backpackers from Australia had turned up, some familiar Berlin locals and a fair handful of Italians, along with the Festival regulars.

All we had to do now was eat and drink, as the artists encouraged people to take a brick of the wall, and give it to someone else to enjoy. It wasn’t really a re-enactment of the Berlin Wall’s demolishing in the late 80’s, instead, it was a rather hippy-ish communal eating ceremony, which by its nature will never be boring, especially if you’re hungry.

This project was a scaled-down version of major works created for the City of London and the Melbourne City Council in Australia, where local residents and community groups, with months of planning in advance, built up the respective cities bit by bit, out of food. I could imagine these larger scale works resonating much more than the Berlin event, as so many more people had invested themselves in the task, but at least we all had a chance to gain an insight into this ongoing sensory project, devised by an artist collective who shrewdly capitalise on the power of food to engage.

And that’s the nature of open call, participatory work – it’s experimental, it’s unpredictable, and allows the artist (and the curator) to play with ideas, even if the outcome doesn’t turn out as planned. The Eat The Wall artists were given a chance to test their ‘Eat Art’ format in a different context, assisting in the ongoing development of the project. 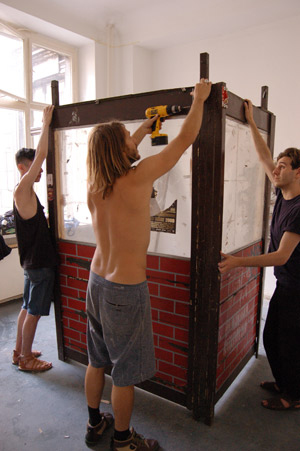 With so much creative content around us these days, and a large part of the art world preaching to the converted, it’s refreshing to find a curated program that engages directly with the viewer through participation. Why, for example, should participation be the exclusive realm of reality TV shows, which play on our own fears and emotions, and for the most part ends up as crass statements of aspirational wealth and ideas of ‘beauty’? The artists in New Life Berlin expect much more from art, and are prepared to take the risks. It’s controversial, it’s irreverent, and I’d like to see more.