When you are walking on the street, you would see a person put his/her head into a garbage vain or crash at the wall. I recommend to look at that carefully because this might be a piece of art work.

Mark Jenkins is an installation artist to make sculpture by using daily life goods such as plastic wrap and vinyl. This street-based artist visited Japan at the first time, in order to exhibit his works which is collaborating with Miho Kinomura from STUDIO.D.O.G.INC at the DIESEL DENIM GALLERY AOYAMA in Tokyo. 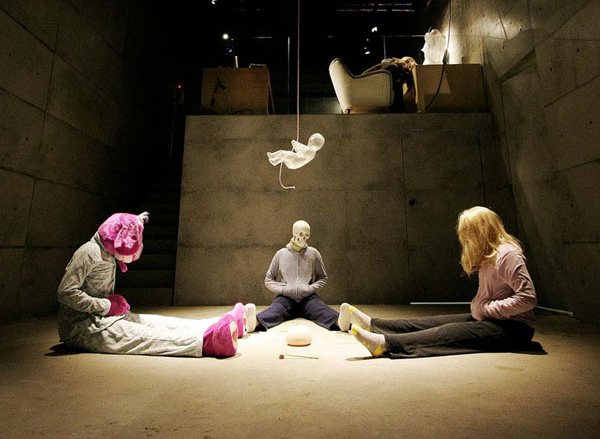 The theme of exhibition is “Glazed Paradise”. Knowing what Mark’s Paradise is, I interviewed with both Mark Jenkins and Miho Kinomura.

Firstly, I ask Mark about this exhibition.

Could you please elaborate on each works at the exhibition?

PICNIC with the 3 seated figures inviting a fourth person (the viewer) was the main installation for me. The idea here was 4 figures (the participant included) getting ready to use a pair of chopsticks on a rubber boob. It’s both a comical piece in the absurdist sense but also something for deeper contemplation. Across from the viewer we have the skull headed figure (death) that stares to the girl (to the viewer’s right) as if it is her symbolic breast perhaps. This girl who is lost in herself I think is in many ways the main character. And to the viewer’s left we have the dog-headed figure in pajama’s, tongue out, staring at the boob representing our animal greed for sex. Above we have the baby dropping in seeking nourishment. And so it’s about tensions between, sex, death, greed, the need for nourishment, etc.–a sort of confusion in balance with itself through the construct of this meditative circle. 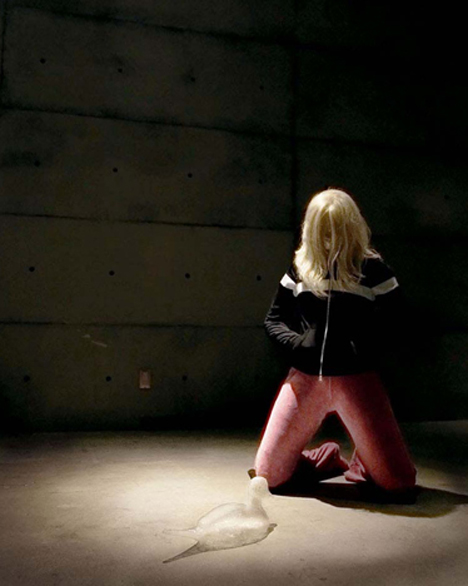 The other main installation (untitled) is the kneeling girl with the floating angel and the ducks. Again the blond haired girl is the main character. And again, she is lost in herself with her hair in front of her eyes. She kneels to the bald apparition but with legs spread while the ducks swim to her in a way of returning the womb but with a sort of sexual edge. As in PICNIC it is hard to feel if she is feeling sadness, shame, or in a deep trance, but it’s another meditative scene, as prayer is. There is no direct invitation to interact here to the viewer, but for me, I think it’s best to experience this scene by kneeling beside the girl. 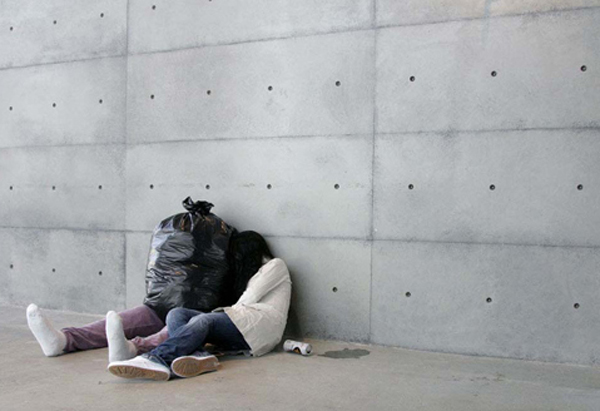 The scene with the Trash-er (garbage bag with legs) and the passed-out girl was made to camouflage the girl as being “trashed” which is English slang for someone who has had too much to drink. 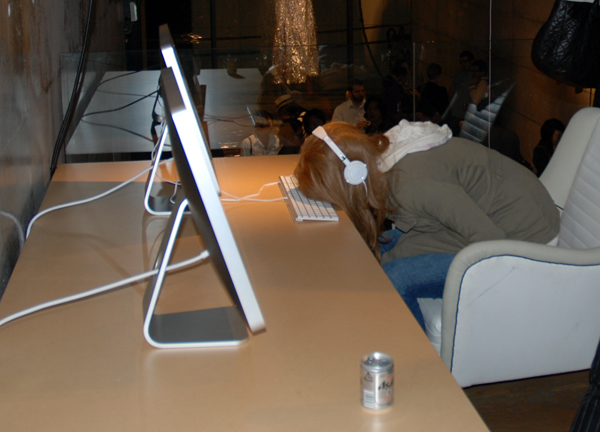 Upstairs in the video area was another piece which attempted to camouflage itself with the gallery viewers with this female sculpture passed out in her keyboard. Since a lot of my street work is about camouflage via hyperrealism, I like to try and achieve this indoor as well.