The Houston Fence is a temporary outdoor installation on chain-link fences inspired by QR code barcode patterns. It is located at the intersection of Broadway and Houston in New York City, a crossroads notorious for its heavy traffic. The project was built as a result of a commission to improve fences put in place for a major street infrastructure construction project. 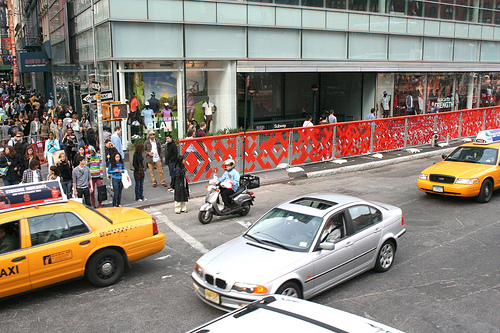 The Houston Fence occupies all four corners of this junction and identifies each one with a color—green, yellow, blue or orange—that relates to the site, the traffic, and the city. But as the fences are moved during the construction process, these color combinations will change. 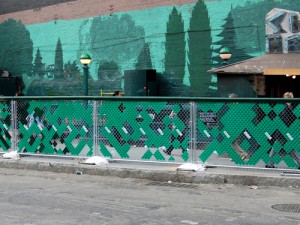 The patterns on the fences are meant to be viewed at different distances and speeds (e.g. by pedestrians, cars, bikes). Put-in cups are used as “pixels” to create scattered designs that partially fill the sixty chain-link fences set up along 480 feet of the Houston corridor. 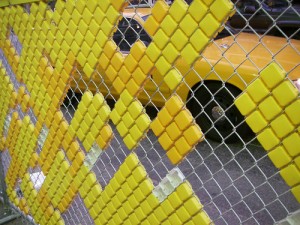 As part of the project, the team updates the blog HoustonFence.mobi with documentation of the installation’s evolution and its interactions with the public and the city. The mobile version of this blog can be accessed from any device that can scan the QR code stickers placed on the fences. 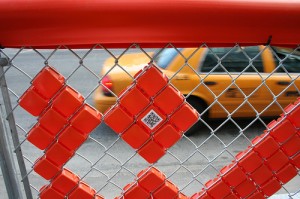 QR code on one of the fences

The Houston Fence was created by Carolina Cisneros, Carlos J. Gómez de Llarena and Mateo Pintó, the same team that brought you the Fulton Fence. The project was sponsored by the New York City Department of Design and Construction and is part of the second phase of the Re:Construction program originally launched in November 2007 by the Alliance for Downtown New York and the Lower Manhattan Cultural Council.