On May 15th 2008, a piece of mail arrived following the report by The Hokkaido Shimbun Press, “At last, the Japanese government is going to recognize the Ainu as an indigenous people!” The mailing continued to report that the Ainu would get together the next day to sing and dance at the Ainu Music Festival. I was surprised by the fact that the Ainu had not been recognized, not only had they lost many things in throughout their long history but I thought their plight was known by everybody but it actually wasn’t. What does it mean? The statement showed us the significance of the news to the Ainu, and their pride. 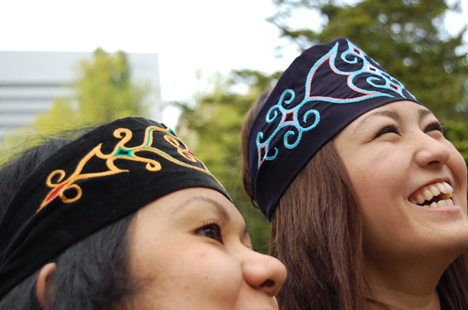 The next day we rushed to the front of the Former Hokkaido Government Office Building. The sky was covered with rain clouds, we could even hear thunder rumbling in the distance and rain was almost about to fall. The venue had Ainu people coming from 5 different areas in Hokkaido, wearing Ainu costumes with Ainu patterns which are produced using handstitch. Some of them were running around with signs saying “Congratulations on accreditation as indigenous people (TBD)”. 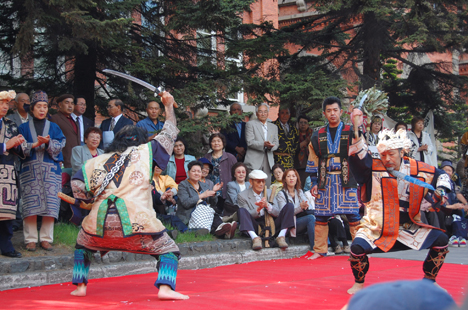 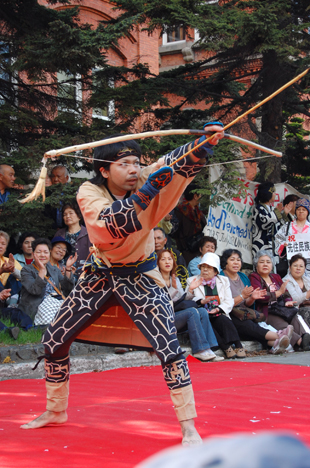 The traditional songs and dances are different according to region. Ainu Traditional Dance revolves around appreciating and respecting nature and land as gods and goddesses who support our everyday lives. They had been dancing at various events and festivals throughout history. 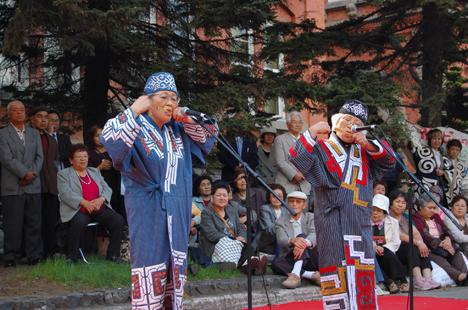 Playing Mukkuri by Yaeko Matsunaga and Keiko Hanaoka. Mukkuri is one of the representative instruments of the Ainu. By puling one string, you vibrate the bamboo ventil and it resonates the sound in your mouth. The structure is very simple, but playing it is not easy. The deep sounds filled the venue by 2 masters who continue carrying on the Mukkuri at the Ainu Museum.