So why strip a tool, especially the more sophisticated 3d animation software that is so readily available these days, down to its basic level, when it can do so much more?

“Most 3d animation I see uses the same things over and over – raytracing, motion blur, anti-aliasing, and so on. When I do something more raw, there’s an honesty to it, but it’s also about economics. I can render out the animations almost as quick as the preview, and at the end of the day I don’t think it affects the story at all. I don’t want to make things look polished for the sake of it.” 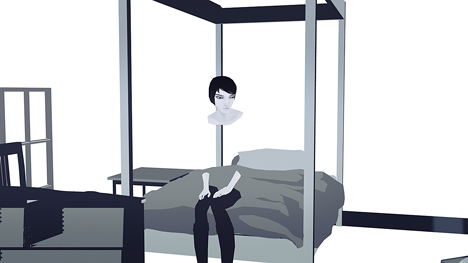 We’ve just finished our coffees, and are both noticing how relaxed everyone is around us in the Café, for a Monday afternoon. Which prompted me to ask David about his recent relocation to Berlin.

“I’d just finished working on Garth Jenning’s second film, Son of Rambo, and after that I knew it was going to be a quiet period, so I came here, and made a short film.”

“I knew Berlin was pretty cheap and I knew I could afford to live there for about a year and not take on any commercial stuff, so that’s exactly what I did. I was sure after that, I’d leave, but I’m still here.”

Since finishing work on Garth Jennings’ second film, Son of Rambow, in London last year, David made the move and sees no reason to go back. His sentiment echoes the reason a lot of artists, musicians and writers come to Berlin – not just for the cheaper rents, but the laid-back vibe, which is most other major cities is less easy to come by.

“I get so much work done here, and I still have a life. People are nice, and there’s a community, and it’s more open.”

And there’ll be much more of David’s work to look forward to. Future projects include him curiously taking up an anonymous alter ego, under the name of Holy Ghost. Under this title, he’ll focus on collaborations with other artists, which even has a set of ‘ten commandments’ by which all projects must adhere to.

The grey clouds start to gather in the sky outside, and it looks like we’re in for another drizzly Berlin day. We pay the bill and leave, and as I say goodbye, I can just imagine David going back up to his flat to keep on working – set off a few renders, sketch out a scene, conceive more crazy script ideas for PSS, and have a chuckle to himself while he does it.

One thing’s for sure – this sprightly 22 year old is an innovator, who seems intent on keeping us guessing, and not content with throwing us the same old stuff we’re used to. As he so aptly writes on his website, ‘Walt would shit in his grave’.