When 13-year-old Adriana is kidnapped by sex traffickers in Mexico City, her 17-year-old brother, Jorge, sets off on a desperate mission to save her. Trapped by an underground network of international thugs who earn millions exploiting their human cargo, Adriana’s only friend throughout her ordeal is Veronica, a young Polish woman captured by the same criminal gang. As Jorge dodges overwhelming obstacles to track the girl’s abductors, he meets Ray, a Texas cop whose own family loss leads him to become an ally. From the barrios of Mexico City and the treacherous Rio Grande border, to a secret internet sex slave auction and a tense confrontation at a stash house in suburban New Jersey, Ray and Jorge forge a close bond as they frantically pursue Adriana’s kidnappers before she is sold and disappears into a brutal underworld from which few victims ever return…

About 2.5 million people from 127 countries have been trafficked to 137 countries for purposes such as forced labour, sexual exploitation, the removal of organs and body parts, forced marriages, child adoption and begging, according to UN extimates, reports the Austrian daily “Wiener Zeitung”. 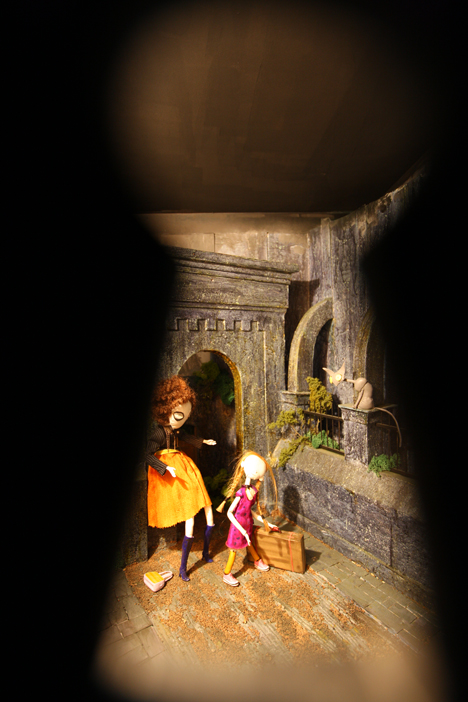 Yet another “highlight” of the three-day conference was an exhibition initiated by British actress Emma Thompson. “Journey” (read Madeleine Bunting’s compelling contribution to “Thompson and Journey“ in the Guardian Online), which demonstrates the experiences of women sold into the sex trade, is a powerful exposure of the horrors of sex trafficking and had already been on display in London’s Trafalgar Square.

Like in London, rusty containers were put in front of Vienna’s famous Albertina museum of art – cheap and tacky amid all the pomp and ceremony of the city’s first district. But that was exactly the point they were making, and there was a steady queue of intrigued visitors waiting to walk through the installation. Each container had been curated by a different artist, from artist Anish Kapoor to Oscar-winning costume designer Sandy Powell. Visitors emerged white faced and shaken.

“I could not get the image out of my head of the empty bedroom of a trafficked woman, trapped in prostitution: the dirty unmade bed, the bowls full of condoms, the used condoms half pushed under the bed, and that horrible smell”, my friend who had seen the exhibition told.