Robert Seidel is an experimental filmmaker and projection artist based in Germany. His works have been appeared 3 times in the selected list of DOTMOV FESTIVAL, 2004, 2006 and 2007, and received high marks from guest judges. Robert will be doing a Japan Tour with Max Hattler from April 22 to May 27th. We interviewed Robert about his works and its production. 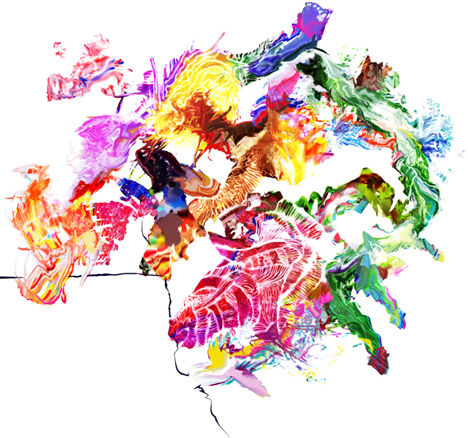 My name is Robert Seidel, I’m from Jena, a small university town in Germany, where I studied one year Biology before doing my diploma in media design at the time-honored Bauhaus Weimar. I’m an experimental filmmaker and projection artist torn between art, science, computers and nature’s beauty resulting in the name of my website.

How did you start making films?

My dad introduced me to computers quite early, but he ensured that my brother and I don’t play games only. So I began to paint digitally, wrote little fractals applications and later got into 3D. With these technical skills I started to do animation at Bauhaus, but there were no classical animators around, so I had the freedom to develop my style and express very personal stories.

Could you tell us about the concept of your works?

I’m doing organic, semi-abstract animations that have a certain complexity and connect with the viewer on an emotional level. It’s mostly transported by something that gets more beautiful with every viewing, only because you see different layers – like a person that gets more precious over time. But the films also need this time as well, they are no flashing video clips or screen savers like some people think.

I’m interested and fascinated by a lot of things, which I try to combine in my movies. First there is nature in all its form and beauty. Second, the possibilities the computer has to offer, especially the way to recombine and undo things are an important part of my working. The third source is fine arts (Marcel Duchamp, Dieter Roth, etc) and experimental filmmaking (Jan Svankmajer, Maya Deren, etc), which really got me thinking how to develop new spatial and temporal concepts to evoke a certain emotion in the viewer. In the end the beholder itself has become a very surprising part to me – how people react and what stories they unfold for themselves is really helping me to understand a lot of things. But I still have to learn a lot…

“_grau” was my diploma piece which is my broadest movie, showing an abstracted car crash. It’s very personal, but also fictional, as the car crash didn’t happen in the last split seconds. The movie is based on the dense structure of my own memories. The name derives from german word for gray and the basic idea is, that nothing in our life is purely black/white or good/bad. Everything offers different shades over time or in comparison. To communicate this idea and to create a believable abstraction for all sculptural moments, everything you see is based on real sources of my life: might it be little stories, 3D scans of my head and hand, motion captured movements or a MRT data set of my brain. _grau took 9 months of work and it’s the best I’ve done so far. Now, after 4 years, I truly hope I find the time and especially the tranquility to create a true successor…

“Futures” is my first music video. It was commissioned after _grau for the British band Zero 7 featuring the beautiful voice of José González. I wanted to create a special mood for this song about our future shaping over time. So it starts with sequences of crushed, everyday objects that get clearer, like our wishes and desires. As life is full of accidents, also the video is and you see compression artifacts and a rough synchronization. These errors help to build the morbid tableaux of all possible futures. I had a very small budget and full creative freedom, but the record company didn’t use the video in the end. So it was only shown at festivals and they even had another video done for the same track…

“appearing disappearance” is a commission for the HD project “Advanced Beauty” curated by Universal Everything. This will be soon released on Blu-ray and features a lot of designers and artists using the possibilities of the highly detailed video resolution. It’s a very short and painterly piece with some abstract but also real motion fragments, creating this mysterious, evolving-dissolving structure. It only works like I intended, when you see all the details in HD, so a YouTube version doesn’t do it justice.