At the end of January in Berlin, which was warmer than usual, Transmediale 08 was held. Transmediale is an art festival to take a view of the present scene of media art and held in Berlin every year. This year, Haus der Kulturen der Welt became a new venue for the festival instead of the former venue Akademie der Kuenste. This more spacious new venue was filled with people who got interests in up-to-date media art as usual.

As the word “Media Art” implies various expressions, the contents also include different fields. Starting from the screening of video work, photography, installation, presentation of project, and live-performance were presented for six days from January 29th to February 3rd. 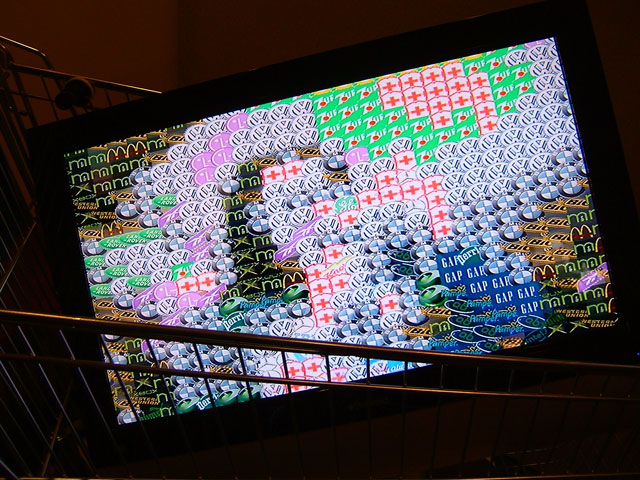 This year, it had a subtitle “Conspire.” A topic of conversation at last year’s Tranmediale and the keynotes lectures was “controlling digital media would control this era.” That kind of analysis seemed to guide the keyword “Conspire,” which means “conspiracy.”

All right, let me introduce some work, which caught my eyes.

As I entered the entrance, I reached to the lounge in the middle of the venue. The space was divided with a futuristic and eye-catching partition, which was set for this festival. On the partition, some monitors were set here and there. In front of the monitors, something like black tires was lying down. The viewers could lie down on them and watch the videos as they put themselves at ease on the sofas. At the center area surrounded by the partition, there were liquid crystal monitors, which are connected to the computers, forming a line on a table. I could watch some presentations and get access to websites from them. 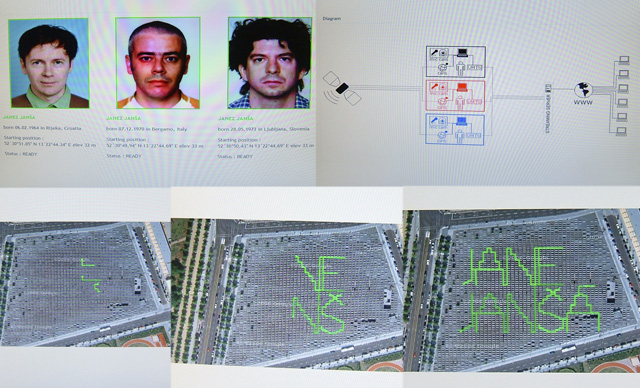 Among these presentations, the Flash documentation of the performance by three artists, called themselves Janez Janša, was outstanding. Their theme is a nature of the validity of signature, especially in public. In 2007, three of them had changed their names to Janez Janša, and have searched for originality and reproduction. In this project, by chasing their tracks with GPS they carry, they stood out their “signature” by following their tracks at the Holocaust-Denkmal Berlin. 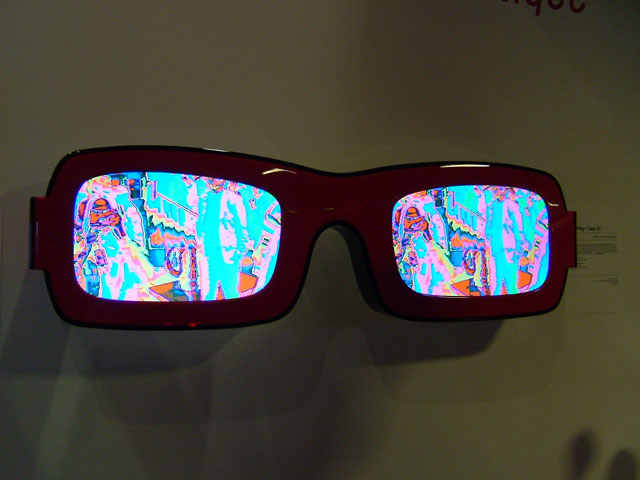 As I entered the sideway of the lounge, I found a work of Electroboutique. Electroboutique is a company, consisted of gallerists and artists, and has created products, which are the fusion of art and information technique based on matured opened-sources from this past 20 years. In this show, they showed a glasses-shaped monitor and belt-like electrical scoreboard etc. The monitor has a structure to output the on-time processed images, which were taken from CCD camera setting up in the middle of the work unnoticeably.