There is a new and innovative platform for Asia’s emergent creatives – Tiger Translate, an ongoing series of events showcasing individuals who double-time as creative forces in their home countries. Taking the locals-rule concept onto a global stage, Tiger Translate has already roared through cities such as Bangkok, Ho Chi Minh, Dubai, Beijing, New York, Berlin, Dublin and Auckland, where it all started three years ago as the global marketing platform conceived and organized by world-acclaimed Tiger Beer. 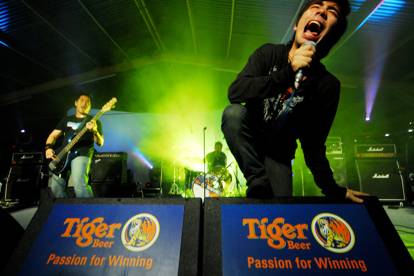 If one word embodies what Tiger Translate is about, it is redefinition- that is, redefining our place in an ever-changing and globalizing environment by updating our thoughts on contemporary art and culture and getting in touch with the creative heartbeat of our planet. To this end, Tiger Translate has nomadically discovered artists that are redefining contemporary Asia for the world to see. Here’s how it works: A national search is announced within a country and artists from diverse fields such as graffiti, illustration, graphic design, photography, film and music submit their work. Then, a few get chosen by a qualified panel to perform in an exclusive party event and next, the most outstanding artists and performers will end up showcasing their craft alongside other creative artists at the Tiger Translate Global Showcase in London set for August 2008.

This month, Tiger Translate’s camp operations in Bangkok, have uncovered some of the hottest bands in thick of the Thai urban jungles. The grand finale took place on February 9th this year at the Suanlum Night Bazaar in Bangkok where a music battle royale of nine bands will rock out to win some handsome hard cash 1,000,000 Thai Baht and a trip to London for the Tiger Translate Global Showcase.

Even though bands may have their eyes locked on the prize, this is perhaps secondary to displaying their passion on stage and the joy of taking part in such a community-building event where artists of all disciplines come together to celebrate. Featured in the photo below are members of the well known Thai indie band, Scrubb, at a Tiger Translate event in the Chiang Mai province. 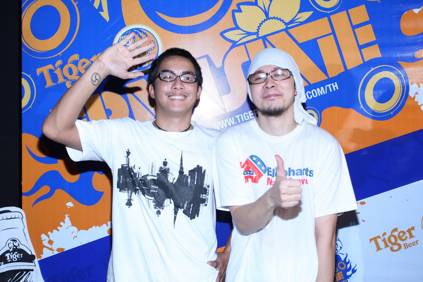 And wherever Tiger Translate sets camp, a selection of spaces are creatively transformed into art-filled galleries and spots for live music to deliver a multi-sensory fusion of music and arts. Pictured below: famous Thai comedian, Note–Udom Taepanich (right), well-known photographer Chayaporn Maneesuwan (middle) and world-class graffiti artist, P7, showing their brand of creativity at the first Tiger Translate event held in Korat, Thailand. 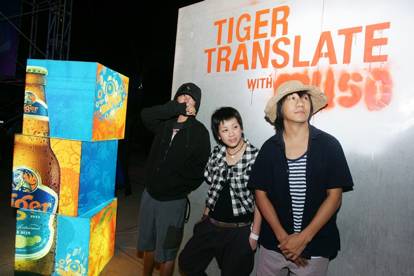 Included in the fusion of creative arts, was another notable art contribution- umbrellas serving as canvas for a showcase of manga art. This was showcased at another Tiger Translate party in Chiang Mai. 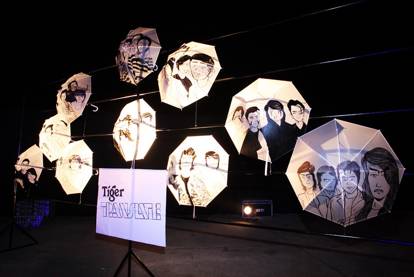 After successfully unearthing some of the most creative emerging talents from Asia in the last two years, the Tiger brand team will continue to uncover bright young creative talents to be featured at the Tiger Translate Global Showcase held in London later this year. 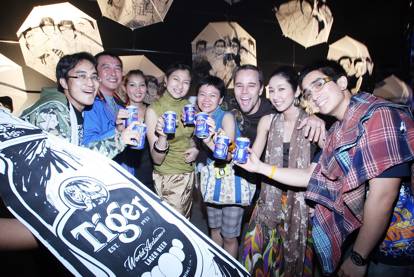 All in all, Tiger Translate events are a sensational fusion of art, design and music accompanied by the world-acclaimed brew, Tiger beer. As long as emergent creative artists keep breaking new ground by challenging themselves and their beliefs, Tiger will continue to drive the youthful and energetic spirit of creativity wherever it goes.