The band consisting of Ichiro Yamaguchi (vo&g), Motoharu Iwadera (g), Ami Kusakari (b), Emi Okazaki (key), and Keiichi Ejima (dr), “Sakanaction” were born in Sapporo, Hokkaido. Their debut album “Go To The Future” attracted public attention, and they are growing steadily, such as with their national tour and the release of their 2nd album. We interviewed 3 members from the Sakanaction and asked about their creativity and the 2nd album “Night Fishing” just released on 23rd of January in Japan. 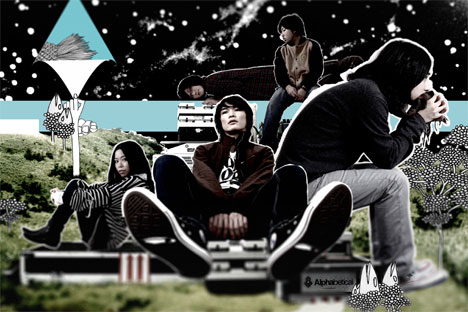 How did you start “Sakanaction”?

Yamaguchi: I formed a band in my high school days, which was an emotional rock band like general UK rock, but it didn’t go well at all. We discussed about how to deal with it and the result was to use a computer to make music. After all, the band broke up because of this decision, so I continued doing music only by myself. Doing DJ at night clubs, I found that people quickly got excited with music from CD, although our live concert didn’t make them like that. I thought I wanted to use this DJ experience.

On such an occasion, an indie label asked us to participate in their compilation album. Making a track including sounds and lyrics by myself, I thought that I need a guitar. And I was looking for a guitarist and talked Iwadera into help me as he had so much spare time at that point. We made a new band together and named it “Sakanaction”. When I firstly suggested “What do you think of the name Sakanaction?”, he said “I hate it”, but I forced. (This band name shows the member’s wish to act quickly and lightly, like fishes in the water, without fearing changes in the music scenes. Sakanaction = Sakana (fish) + Action).

Did you have other picks for the band name?

Yamaguchi: Yes, like “Films”. We had been doing live concerts without any lighting sets except the light from projected films. “How about ‘Films’ for the band name as we are doing both music and videos?” I said, and he (Iwadera) was like “I love it!”. He just started connecting the Internet at that time, and even took “iwadera-films” for his email account. However, the name of “Films” already existed for a popular techno-pop band of 80s, and we gave up using it.

Could you tell us about the other members too?

Yamaguchi: Ejima (dr) used to often come to see our band. He was a friend of the guitarist who was helping our band. Okazaki (key) and I were working together a long time ago, and I invited her as I knew she continued playing the piano. Kusakari (b) was originally in another band in the same scene, and we poached her after her band ended. It was all good encounters, how do you say it, a “matchmaking” band?

The band is growing steadily; formed in 2005, debuted in last year, already released the 2nd album, and now planning the national tour. Did you have the concrete vision from the beginning?

Yamaguchi: We didn’t have such a clear vision, but had hoped to be the artists being between the entertaining major scene and underground. While going for it, the band has been growing. We can say that we have been very fortunate, and also people we met were good. The most important fact was that we could meet the crews sharing a common goal.

Could you tell us about the new album released in January 23rd, “Night Fishing“?

Yamaguchi: “Night” was the theme I was thinking. It’s mostly a night when people become anxious or worried. When I myself feel sad or agonizing also it has been always at night. I had been thinking to make a song with such a bumpy ride emotionally, and the result was this “Night Fishing”. I wanted to make this album like a documentary. The form of words is closer to Haiku than lyrics. I think it’s all about how we can send our message within the limited number of words, combining with melody. So I want to be in non-fiction by this mean. While the first album shows our persistency such as a play on words, we went more direct with the second album, making it one-shot deal.

Any differences from the last album?

Yamaguchi: Releasing the first album, we found that it had better to try more adventurous things without hesitating to be changed. We thought we shouldn’t forget the mind for fun, like doing “progressive” things or taking choral singing out of nowhere. After our debut in this music scene, we became to be compared with the artists we had respect for, including QURULI and SUPERCAR. Thinking about how we can play a game with those artists, we thought it’s important to keep the flexibility and playful spirit as our weapon.