Virtual architecture grows in accord with the environment.

Above is a copy of Corpora in Si(gh)te. Who can imagine what I’m talking about if they only see this copy? I know I couldn’t. 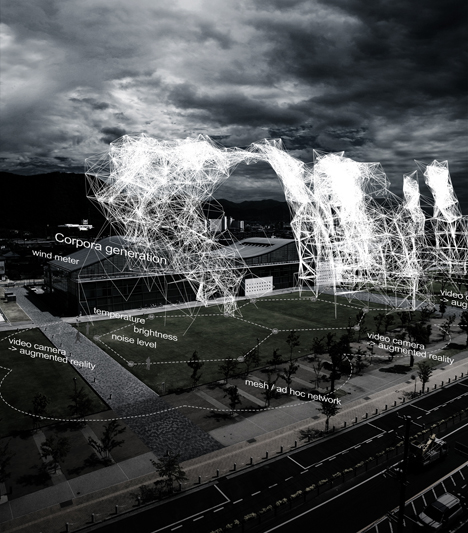 Corpora in Si(gh)te means “integration of view”. This work is being exhibited at the Yamaguchi Center for Arts and Media (YCAM). For the exhibit, they placed 40 sensors in Chuo Park located next to the center. Each sensor senses information regarding its surrounding environment, such as temperature, light, wind, sound, and the movement of people. The program processes the information in 3-D. This results in a constantly changing shape and structure, depending on the complexity of the rules for that specific piece. For example, it stretches up when it’s dark; makes a void when people are around; adjusts to the forces and direction of the wind. 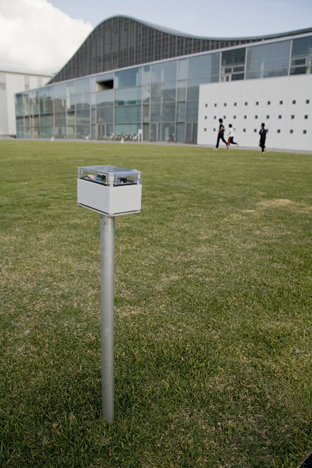 The changing information of the environment, collected by the sensors, will be sent to Corpora in order to produce a new node which then constructs Corpora. So, a piece of architecture is constructed based on the aggregate of the various nodes. It might be easier to understand if you imagine an ant’s nest or corals. Points and lines that change every minute depending on the environment will be collected and will ultimately create one virtual building. It is very digital indeed, but also an organic and plant-like form of architecture. 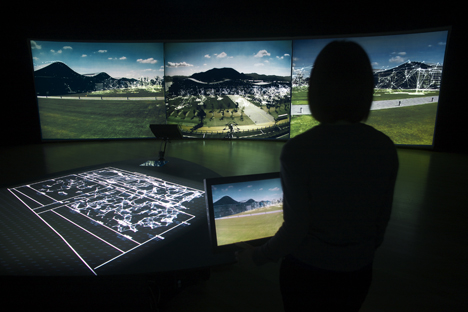 Souta Ichikawa, a leader who created this work ‘doubleNegatives Architecture‘ says “People set up a world with their own scale. That’s the only way to do it.” So he created a new way to express the space in a 360° format, where you are the center of a ball. This view is named the “super-eye”, and a system like node exists as an inside sensor. This facet became an important element in constructing Corpora in Si(gh)te.

The view of super-eye and the self-growing program which adapts and adjusts to the surrounding environment is the core of Corpora in Si(gh)te. The idea and skill behind aggregating a wide variety of information included media applications developed by the military, but something that stimulates our senses is surely art. 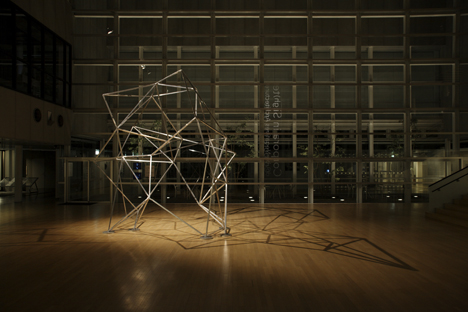 New discoveries, new encounters, and new ideas came to me after I experienced Corpora in Si(gh)te. When I left YCAM, I wondered if I saw a virtual architecture image on the grass, changing with the environment when nothing should be there.